Matzah: Bread of Freedom and Slavery 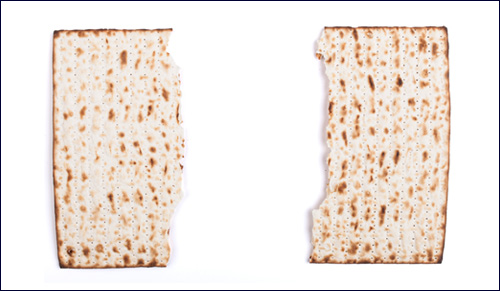 Why did the Jewish people have to go through slavery in the first place?

Don’t be fooled by the simplicity of matzah. Hidden in this seemingly flat and unassuming cracker lies an incredible depth that captures the essence of the Exodus and the lessons of the Passover holiday.

Why are we commanded to eat matzah on Passover? As every child knows, we eat matzah because the Jewish people didn't have time for their dough rise before being rushed out of Egypt by a frantic Pharaoh who feared imminent demise. In that sense, matzah is a declaration of freedom, a memento to the liberation we experienced that night, now preserved for all of history.

But as we look deeper, things get a bit puzzling. The Haggadah starts with the declaration that matzah "is the bread of poverty that our ancestors ate in the land of Egypt." The Egyptians fed matzah to the Jewish slaves because it is "poor person's bread" that sits in the stomach undigested for a long time, making it unnecessary to feed the slaves as often. From this perspective, matzah isn't a symbol of freedom, but rather a symbol of poverty and slavery.

To make matters even more puzzling, the Jewish people were originally commanded to eat matzah that very first Seder which the Jews celebrated while still in Egypt, as the cries of the Egyptians mourning their first born were emanating from every home. If they were already eating matzah before being rushed out, the matzah must be more than a reminder of the scene leaving Egypt!

Several years ago, a film called "Slumdog Millionaire" inspired viewers around the world. It was the story of a young man from India whose childhood was filled with poverty, abuse, lost love and many life-threatening experiences. One day the man's luck changes and he finds himself a contestant on "Who Wants to be a Millionaire?" As he is challenged by one difficult question after the next, he reflects back on the many negative experiences of his life, each one providing another answer that leads him to winning it big! The very negativity that plagued his life became the key to his salvation.

The very negativity that plagued his life became the key to his salvation.

As we discuss the slavery in Egypt and the miracles of the Exodus, the question begs to be answered: Why did we need to go through it all in the first place? Why did the Jewish nation need to be subjected to such pain? Couldn't the Almighty have nurtured us while we were safely tucked away in a quiet little shtetl (village) until we were ready, then give us the Torah without all the complication?

Clearly not. The Jewish people needed to experience slavery in order to develop key character traits:

When we go through difficult times, we realize that without the help of others, the individual is just not all that great. We need to be part of something bigger than ourselves. In Jewish tradition, the most powerful prayers come from a person in despair, because that person can truly open their heart to the Almighty and say “I need you.” The Jewish people needed to reach this level in order to fully let God in.

Becoming the Jewish people meant embracing a future that would provide no shortage of trials and tribulations. Persecutions, pogroms, inquisitions, holocausts and terror would be a recurring theme in the nation's future and they had to have the power to persevere built into their DNA. Only a rough beginning could adequately prepare them for that.

In Egypt, despite falling to the lowest depths of impurity, the Jewish people maintained a Jewish identity – in style of dress, language and names. Most of all, they kept the family unit strong. The power to remain true to our identity, though we did not yet have the freedom to perform mitzvot was crucial to our survival as a nation throughout history. When there is nothing left to hold onto, we know we are still the Jewish people.

Now we can appreciate our curious dichotomy of matzah as the bread of both slavery and freedom. On Passover, matzah takes center stage as the “bread of slavery” that represents those character traits we developed as slaves in Egypt. And, when the Almighty summoned us to leave Egypt, He set us up to carry that very same food into freedom.

Indeed, is through the cauldron of slavery in Egypt that we solidified our national character of humility, perseverance and identity – the very traits necessary for a free and holy nation, enabling us to endure any hardships on our mission of delivering God's eternal message to the world.

The Seashore and the Seder

Passover Seder by the Numbers
Adam and Eve Were Vegan
Bechukotai 5782: Divine Retribution
Behar 5782: Working to Live or Living to Work?
Comments
MOST POPULAR IN Themes
Our privacy policy