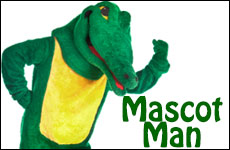 As the mascot at my kids’ summer camp, I realized that we all want to know who is pulling the strings in life.

The thing I discovered, being the mascot at my kids’ summer camp, is that all kids want to know is who’s inside the costume. Even though the whole point of the costume in the first place is that the character on the outside is more interesting to kids. Inside the costume, I’m just another adult, albeit a sweaty, dehydrated one. Who’s not wearing much under the costume, because it’s a million degrees in there, though he’s the only one who knows it.

All kids want to know is who’s inside the costume. But inside I’m just a sweaty dehydrated adult.

It happens to be that it’s one of those camps where the head counselor wants everything to have a lesson, so that the kids can learn without even realizing that they’re learning. And studies show that one way of teaching kids things without them realizing it is to have them learn things by way of a mascot.

Also, it definitely helped that someone donated a costume for free.

Unfortunately, the guy didn’t donate someone to wear the costume. And the head counselor couldn’t very well be that person, because his job is to walk around with a megaphone. And the megaphone would be especially out of place, because mascots, officially, are not allowed to talk.

I’m not even sure how it happened. The head counselor called me up the night before camp, and the next thing I knew, I was wearing a costume.

Ok, it wasn’t that quick, actually. It took like 20 minutes to get into it. It’s mostly one piece, and you enter it through a small hole in the back. And then seal that hole with a zipper.

I don’t know what made him think I was the person to do this.

“Here, you’re a humor writer. Put on a costume and don’t talk.”

“What kind of costume is it?” I asked.

They eventually decided I was a crocodile, and that my theme was that even if you’re bad at something – sports, for example – you should still try. And I was to play the part of someone who was bad at something. It wasn’t hard for me. I was playing to my natural strengths.

I actually think it looks most like a dragon. Because we all know exactly what dragons looked like, back in the day. Because when you’re being chased by something that can kill you with fire, you’re going to stop to sketch it on a piece of paper.

Yes, you might say that dragons never existed. Were there really dragons? Maybe it’s one of those legends they came up with in the Middle Ages to keep people from wandering into caves. And it’s not my place to say, as a humor columnist. But this costume definitely existed. And if I was wearing a costume of Mickey Mouse, you’d have no problem with it, despite the fact that Mickey Mouse doesn’t exist either. In real life, there’s no such thing as a six-foot rodent, outside of Florida.

So I put on the costume, and I quickly discovered why dragons are extinct. For one thing, here’s something you might not know: Apparently, dragons see out of their mouths. In fact, if you peered into the dragon’s mouth, with a flashlight, you’d see my entire face in there. Like the dragon swallowed me whole. Once the zipper was closed, the only way in and out was through the mouth. Isn’t this where the fire comes out?

But no one thinks about this. Everyone always thinks, “Oh, Mickey Mouse! It must be a blast to be Mickey Mouse!”

Well, it’s not. From the inside, it doesn’t look like Mickey Mouse. People also assume there’s air conditioning in there. But there isn’t. It’s more like you strapped yourself with flannel blankets and wandered into the sun.

Maybe they think that because mascots are always smiling and look happy to be there. But that smile is permanent. They’re just smiling on the outside. It’s kind of like clowns who paint a smile on their face so you think they’re smiling even when they get hit in the face with pastries and climb into a car with 13 of their close friends and a designated driver. (“If the 13 of you don’t stop fighting, I’m coming back there!”)

It’s also not easy to keep your yarmulke on in a mascot costume.

And here’s something else no one tells you about mascot costumes: It’s not easy to keep your yarmulke on. Especially if you, at any point, attempt to see if you can turn your head. It’s kind of like when you wear boots all day, and your sock slowly comes off and starts migrating around in there. At some point I realized that my yarmulke was moving south, down the side of my face. At one point, it was covering my eye. If this ever happens, the only way to fix it is to reach way deep into the creature’s mouth, in front of everybody, with a velcro-ey, 4-fingered hand, and attempt to stick it on, which is sort of like reaching into the bottom of a vending machine and trying to put back an extra bag of chips that came out by mistake. So instead, I just pulled it out through the mouth, along with my glasses, which were falling off from all the jumping around I was doing. I think it looked, to the kids, like I’d swallowed someone and had to pick his yarmulke and glasses out of my teeth – they loved that. Though I couldn’t really tell, because I couldn’t see them.

It’s also hard to tell if there’s anyone’s around to help you. The first time I wore the costume, which was to stand next to the head counselor and greet kids on the first morning of camp, at some point I looked around (so to speak) and realized that no one was outside anymore. Everyone was busy taking care of kids. There was no one at the camp whose official job it was to lead the monster back to wherever it was he left his pants.

So I was left outside with no I.D., dying of thirst, and I had to feel my way around a building I’d never been in before. And I had to keep my head on, because I wasn’t supposed to do anything to ruin the kids’ illusion. And I couldn’t very well just take off the entire costume and drag it around the building, because I was in my underwear, and if you think it would scar kids to see the mascot without a head, imagine how much it would scar them if it looked like a guy in his boxers had skinned and beheaded the poor thing and was dragging it around the camp looking for a dressing room.

But the kids wouldn’t have been scarred. They would have been happy to find out who was in there.

Because whenever the head counselor brought me out, all the kids wanted to know is, “Who’s in there? Who’s in the costume?” As soon as my presentation was over, they’d mob me and try to pry open the mouth. The kids had one focus: Look up into the mouth and see who was in there.

But I actually messed up – some kids did see me afterward. After I got out of the costume, I came back in to retrieve my yarmulke and glasses, and they put two and two together. “It’s you!” they shouted. “You’re the one in the costume!”

I panicked. I had no idea what to say.

Then there was a beat, and they said, “Wait. Who are you?”