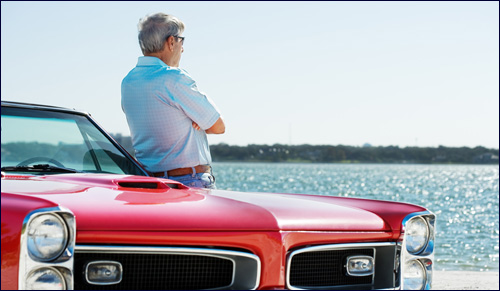 Top five lessons from a quora post that went viral.

When Marshall Karp wrote about his mid-life crisis on Quora he thought maybe it would resonate with a few people. He certainly did not expect that just eight days after his post, he would have a quarter of a million views, 3300 upvotes and over a 100 comments and messages. Far more people than he thought were experiencing the same confusion and struggle that he had gone through and they were grateful for his insights.

Here are what I think are his top five lessons.

1. External appearances and possessions do not lead to fulfillment. “At the age of 39 I had it all. A loving wife, two fantastic kids, an apartment in New York City, a house in the country, new car, nice vacations and a high paying job as Creative Director of a hot creative advertising agency. Everyone wanted to be me. Except me. On the outside I was the poster boy for Happy Successful Man Who Has His Whole Future Ahead of Him. But deep down inside I was miserable. I began to assault myself daily with that five word mantra. The one that so many of us begin muttering when they find themselves wandering through that unfamiliar, unsettling neighborhood known as midlife. Is this all there is?”

2. Most of us lead lives today that we chose as teenagers. We need to think about whether, knowing what we know today, we want to continue on our current paths. “Tonight, I’m going to send someone to your house. He’s a teenager, about 17 or 18. He doesn’t know much about life-what teenager does?...This kid is going to completely outline and plan the second half of your life…Why should you let some teenage kid with no world experience plan the second half of your life? My answer is why did you let him plan the first half? This rut that you’re stuck in, this life that you’re trapped in, who planned it? Not you. Not the YOU you are now. Most of us form our life’s plan shortly after high school…That was my insight. I was pushing 40 and still living the dream of some teenage kid.”

3. We can make a new plan once we realize that we are stuck. Each of us can make choices today using the experiences and the self-knowledge that we have gained over the years. “That was the moment that I decided that the 40 year old me should start planning the life of the 60 year old me and beyond. I was at the top of the ladder, and I suddenly realized I didn’t need one more rung. I wanted to find a new ladder. “

4. Don’t give up your day job and risk everything before you have established a new career. When Marshall decided to change, he didn’t quit his job. He began to write in his free time. “My solution was to start writing on my own. Over the course of countless nights and weekends, I wrote a play… for the next 6 years I kept my day job as an advertising agency Creative Director.”

5. Stay connected with those you love and with what’s most important to you. Too often we enter a mid-life crisis and instead of finding a way to live authentically, we blame. We blame our marriages. We blame our kids. And we lose sight of what is truly most important in our lives. Marshall held onto his marriage and even after his screenplays got him to Hollywood, he kept his priorities. “Many of you asked if my quest for a new career wrecked my marriage. Just the opposite. After two years, despite the fact that I was on the fast track, I left Hollywood and came back to what was most important to me-my family.”

Have you recently navigated a similar transition in your life? What are the lessons you’ve learned along the way? Please share them in the comment section below.

During the Holocaust, A Kindness Returned: A Yom Kippur Message

Define Perfect
Don’t Believe in Other Gods Versus God is One
Seeing Without Eyes
Why Shouldn’t We Eat Whatever We Want?
Comments
MOST POPULAR IN Spirituality
Our privacy policy
Aish.com Is Looking for Great Writers