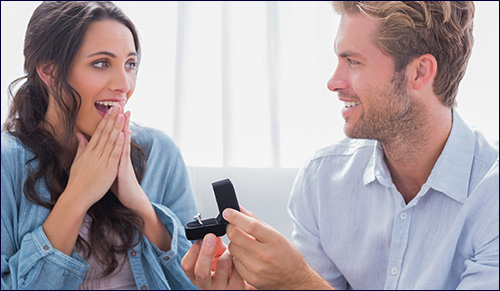 While marriage rates continue to plummet, my son, 22, is bucking the trend and marrying his 21-year-old bride.

In a few weeks our youngest son will be married. Ben is not yet 23; his bride-to-be is 21. In previous generations this fact would be completely unremarkable. But because Ben and Rivka are so young, they are bucking trends in nearly all Western cultures.

Marriage rates continue to fall in every demographic in the U.S. In 1960, the year I was born, about 72 percent of all people in the U.S. were married. By 2012, the rate of married households fell to 50.5 percent, according to a recent Pew Research survey based on U.S. Census data. Also in 1960, only one-tenth of adults aged 25 or older had never been married. Now the number of never-marrieds in the same age group has doubled to one in five, or about 42 million people.

These trends are concerning but not surprising. In my lifetime I have watched society try to beat much of the respect, stature and allure out of traditional marriage. TV shows, movies and books emphasize the single life as a fun and sexy, if sometimes lonely adventure. Marriage is often portrayed as a stifling and enervating prison, unless it is between a same-sex couple, in which case it is usually seen as a beautiful and happy union. In our ego-driven culture, where the most popular and must-have electronic companions begin with the letter "I," people have been conditioned to think of their 20s and sometimes even their 30s as decades meant for personal exploration, incompatible with building a life with another person.

Of course, marriage isn't easy. As Groucho Marx quipped, "I think marriage is a wonderful institution. But who wants to live in an institution?" Apparently, plenty of people do. In fact, divorced people usually remarry, often quickly. Marriages are living things and need consistent nurturing. Sometimes, despite the best efforts of both people, the marriage dies. But often, the best efforts of both people yield something beautiful, something transcendent, which enriches not only them but also their children, friends and community. The hard-won emotional intimacy and shared personal achievements are the fruits of happy and enduring marriages.

Young people who view marriage with skepticism and fear ought to think again, because there is plenty of hard evidence pointing to its many benefits. For one, married people usually have stronger financial profiles than the unmarried. And with the current focus on income inequality, it is alarming that people with only a high school education are dropping off the marriage radar screen faster than other groups. A New York Times article from February 6, 2015 quoted researcher Ron Haskins of the Brookings Institution in Washington, who observed, "There are relatively few relationships that are more fully documented than those between economic well-being and marriage. . . It's a plain fact that people who are married have more income, wealth and savings that last into their retirement."

Money aside, there is the happiness issue. Most studies find that married people are happier and more fulfilled over the long-term than the unmarried. Some ask which came first: a happy and well-adjusted person who was more likely to marry in the first place, or a marriage that made someone happy? Individual happiness involves many factors of course, but according to W. Bradford Wilcox, director of the National Marriage Project at the University of Virginia and the co-author of "Knot Yet: The Benefits and Costs of Twentysomething Marriage," young marriage and happiness do go together given the right circumstances. In a recent column he wrote for the Washington Post, Wilcox cited a University of Texas study affirming that the highest-quality unions were forged by couples who married in their mid- to late 20s.

“Marrying in your twenties makes it more likely you’ll marry someone without a complicated romantic or family history,” Wilcox wrote. “It also makes it more likely you’ll marry someone with a similar educational level and religious faith. There is more of a sense of ‘we-ness’ and partnership than ‘me-ness.’ Marrying earlier than the mid-20s is associated with markedly higher divorce rates unless the couple attends religious services together. In that case, they can navigate the challenges of marriage and family with a lot of community support.”

Other benefits of a 20-something marriage include a more active and satisfying intimate life, which is strongly linked to marital happiness; the ability of women to become pregnant more easily; and for men, more stability overall, measured by drinking less, working harder and out-earning their single peers, Wilcox observed.

I suspect that more young women are beginning to realize that it’s a mistake to wait too long to marry, despite what their sociology professors say. A TED talk aimed at 20-somethings given by Meg Jay, the author of “The Defining Decade: Why Your Twenties Matter and How to Make the Most of Them Now,” has garnered 6.9 million views. In it she relates the tale of a young woman who said, “The best boyfriend I ever had was in my mid-twenties. I just didn't think I was supposed to be [married] with someone then." Wait too long, in other words, and your best potential mate may have married someone else.

For all these reasons, my husband and I will walk our son to the chuppah with hearts filled with joy, love and pride. Ben and Rivka are embracing the Jewish ideal of unwavering commitment to one life partner. They understand that their greatest possible happiness, self-actualization, and potential for spiritual achievements are most likely through the conscious, quiet daily acts of love and giving they will do for one another as husband and wife.