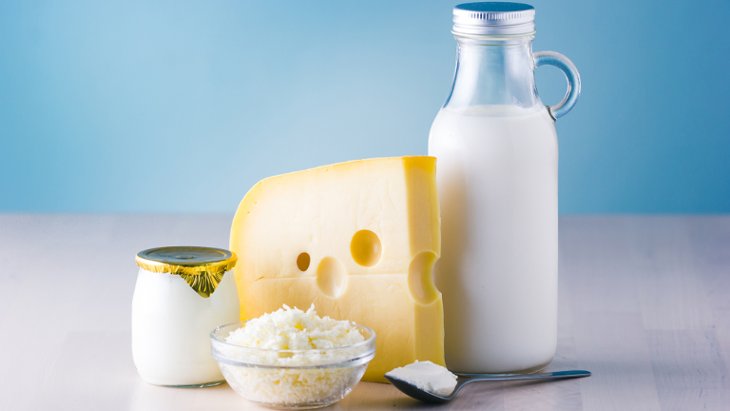 How many good dairy foods do we really have?

The holiday of Shavuot is when we commemorate the giving of the Torah on Mount Sinai. As the tradition goes, the Jewish people got back from Sinai and realized that all of their dishes were no longer kosher so they decided they’d eat dairy out. As is our custom, thousands of years later we just won’t let go and we are still eating dairy on Shavuot.

Problem is, how many good dairy foods do we have? OK I’ll give you blintzes and cheesecake, I’ll even throw you a cheese boureka because I’m feeling generous. But what else you got?

Never fear because David is here with my culinary tips on how to turn your kosher meat recipes dairy for Shavuot.

Chulent is the scrumptious Shabbat stew that cooks for a full day. In the Shavuot version, the ingredients do not change. Throw everything in there, except for meat and instead try some cheese. Now, let the cheese melt. Everybody loves melted cheese. Now, just imagine if that cheese melted for 24 hours. Yum!

It has carrots as we know. Substitute the meat with apples. Maybe throw in some berries. Cook all of that together. Now, you have a nice sweet vegetable goulash. Use that as a topping for the cheesecake.

Take anything you really like and pickle it. Brined cheese is amazing. You may not like Bulgaria. I don’t even know where it is. But their cheese is delectable when brined.

This is going to be tricky because I think gribbinese is fried chicken skin. But why not skip the chicken skin and just go with cheese and fry it? Hardened cheese is amazing. Fry up your cheese. It does not get better than this. Add some onions and fry those too. Good news, this dish is now as unhealthy as friend chicken skin!

The potato kugel with meat in it. Take out the meat and call it potato kugel. Do I have to coach you on everything?

Here is a secret that will help you enjoy Jewish cuisine, whenever you are at a Jewish meal that doesn’t have meat. You can use this secret once a year, on Shavuot. Take a hot piece of potato kugel. It has to be very hot. Put cheese on it. Let the cheese melt on it. Amazing. Walla. Like a magic trick. Melted cheese tastes good. They just never gave us the chance to try it. Shavuot is your chance to make your Jewish eating more non-Jewish.

As Jews we have pastramasized everything. Salt it and smoke it. Smoked cheese now becomes pastrami cheese! Throw this on rye and you are eating kosher cheese deli. A good Jew should never be left for any amount of time without deli. Don’t let the Shavuot holiday hurt your Jewishness.

Put every type of cheese inside. A four inch high cheese sandwich has got to be unhealthy, therefore very Jewish.

I know it sounds like you have a dirty mouth. That is just how Yiddish sounds. It doesn’t mean that it’s not tasty. Triangular meat filled perogies, generally dumped in soup. Take out the meat and put sour cream inside, why not? Sure it might make your soup look white but do all Jewish soups have to look so brown?

The Middle Eastern corndog. Add cumin to your cheese and fry it with bulgar on the outside. To keep in Middle Eastern tradition, use halloumi cheese for this.

If you want to make your food Israeli, just add cumin to it. That itself will make it Jewish.

If you still need recipes for Shavuot, why not look to other foods of the world. There is a whole world of Italian cuisine out there; it just needs a Jewish twist. Here, I will help you:

This is already a Sephardic fleishiks dish, known as Meginah. Take out the meat, put in cheese.

In other words, a blintze.

In other words, kugel. That is easy. Take Martha Stewart’s dish and change the name, and you are Jewish. Just don’t decorate the dish.

Already Jewish. Any Israeli who owns a pizza shop will tell you, Israel created pizza.

For extra points, make it even more Jewish by making it with matzah. You did it on Pesach, why not keep the party going.

Vegetables and pasta and cheese. This can be called the almost healthy dish for the Jews trying to stay in shape, at 5’2” and two-hundred-ten pounds.

Take out the chopped meat, put in cheese and you have Kreplach.

Substitute nacho chips with Bissli snacks or anything made by Paskesz, like falafel bits, throw cheese on it. That’s Jewish.

Button line: add cheese to anything and there is your Shavuot dinner.

Shavuot is a beautiful vegetarian friendly holiday. Don’t worry about vegans, we have Tu BShvat for them.

I think if anything the above has demonstrated that if you are looking to go out for a meal this Shavuot, make sure to find someone who can cook.

Decision of the Heart

WouldJew Believe #11
Morality and Abortion: Three Views
There Are No Limits
Adam and Eve Were Vegan
Comments