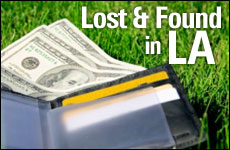 Embodying Jewish values is the best PR for Torah and the Jewish people.

Imagine losing your wallet at a large public event. What do you estimate the chances of ever seeing that wallet again? Especially if the wallet contained $350 in cash, plus credit cards, gift cards and more.

Ethan Youssefzadeh, an 18-year-old in Los Angeles, was at a high-school track meet last week when he found a wallet lying in the grass. Looking at the driver’s license, Ethan was able to identify the owner’s address. So he immediately did the right thing: He got into his car and drove 45 minutes out of his way to the owner’s house.

The owner had been getting ready to cancel his credit cards, never expecting to have the wallet returned. When Ethan came to the door, the wallet-owner was in disbelief.

They got to talking. The owner asked Ethan about his school and his Jewish observance. The owner was so inspired by the young man’s sincerity and honesty, that he offered Ethan reward money.

“No thank you,” Ethan replied. “I was just fulfilling what the Torah teaches – it’s a mitzvah to return any lost article you find.”

That night, the wallet-owner, who is Jewish, wrote to the administration of Ethan’s school, YULA Boys High School, saying, “The truth is, I am not sure if my children, or even I, would have ever returned something with such great value.”

Then the man added: "If this is what Jews do, then I want my kids to be like your students."

In today’s world, when Torah observance is so widely misunderstood and under attack from various socio-political camps, acts of kindness such as Ethan’s carry enormous value.

“People think that Jewish observance is so far-fetched,” Ethan told Aish.com. “But my Torah studies teach that caring for others and respecting their property is normal. I always try to think: How would I want someone to treat me if I were in the same situation?”

The morning after returning the wallet, Ethan’s story became the focus of a special school assembly. From there, word has spread, demonstrating how, in Ethan’s words, “small things can have a big impact.”

“There was never a moment where I thought to keep the money,” says Ethan. “A few hundred dollars comes and goes, but this story will stay with me for a lifetime.”

But that’s not the end of the story. When the wallet-owner found out that Ethan is president of his school’s student council, he offered to donate the $350.

“Okay,” said Ethan. “For the benefit of the Student Council, I will gladly accept.”

The great Jewish philosopher Maimonides writes that a Jew’s purpose in this world is to create Kiddush Hashem – positive PR for God and His Torah. The litmus test of fulfilling this lofty directive is when people look upon a Jew’s actions and say: "If this is the effect that Torah has on a person, then I want it, too."

Ethan and the wallet-owner have since kept in touch. The man says that he never before appreciated the importance of being Jewish, but this deed has now sparked a renewed interest in his heritage.

Which brings the story full circle. The Torah imperative of "returning lost objects" goes beyond just ”wallets lying in the grass.” Another aspect is that if someone has lost their connection to Judaism, we must do what we can to help restore that connection. This, Ethan has unwittingly accomplished as well.