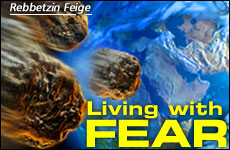 Finding a voice of hope and sanity in our frightening world.

When one hears the news these days, not a single month goes by without hearing about the new 'existential threat' to Israel and the Jewish people.

On top of that, there are frightening prophecies that describe the End of Days, the period leading up to the coming of the messiah, which many people believe we are now in.

Why in the world would Jewish women, who by nature are kind and compassionate, want to bring children into this scary world? My sense of trust in God in being affected. I try to ignore it or fight it, but it's still hard and I would appreciate hearing your comments.
Shalom,
LP

The existential concerns you raise are shared, to one extent or another, by every thinking Jew. The only question is whether we allow them to become the stuff of nightmares, insomnia, or as you articulated in your question, obsessive thoughts about the fate of future generations. The goal for all of us is to find respite, a voice of hope and sanity for our tortured state of mind.

The information in the class that you attended stating that the "end of days" will be punctuated by major tests and challenges, can be interpreted in manifold ways. There are those who contend that much of that has already happened. Both our collective recent history and our personal and individual lives have seen heartrending difficulties and challenges of almost unprecedented proportions, i.e. the Holocaust, physical and mental illnesses, losses, children at risk, fractured families, etc. There is pain and suffering wherever we turn. Very few, if any, have been spared. I would like to think that the Jewish people has already paid its dues and earned the advent of moshiach (messiah).

Consider God's original prophecy to Abraham, our first patriarch, that his descendents will have to endure 400 years of slavery in Egypt to prepare and qualify them (a purification of sorts, if you will) to be the Chosen People. In fact, at the conclusion of that period in history, the Jewish people had only served the Pharaoh for 210 years. How do we understand the disparity in the numbers?

Our Sages explain that the severity of the servitude of the 210 years was of such magnitude that it was equal to 400 years and hence cancelled out the remaining designated years of the bondage. With that precedent in mind, hopefully the Almighty, in His compassion, will determine that the toll in suffering exacted from His children in recent times has been so massive as to warrant an immediate end to the current abysmal darkness.

In discussing the final redemption, the verse states, "B'eto Achishana," -- "in its time, I will hasten it along" (Isaiah 60:22). The commentaries address the apparent contradiction in terms -- if it's at the appointed time, then what room is there for hurrying it along? They respond that there are two possible scenarios. The first refers to a Divinely established point in time that the exile cannot exceed or go beyond. The second, clearly the better option, is that the merit of our deeds will hasten our salvation.

For Professor Librescu, there was no time to think. His was a purely reflexive act borne of a core that is the trademark of the Jew.

Traditional sources teach the consummate, statement of faith, "Shema Yisrael -- Hear O Israel, the Lord our God, the Lord is One", is inscribed on the phylacteries which Jewish men don daily. Concurrently, we are told, the Almighty, so to speak, adorns Himself with His own phylacteries which contain a corresponding statement that declares, "Mi k'amcha Yisrael," -- "Who is like your nation, Israel?"

The remarkable quality of God's people recently came to light once again in the tragic massacre at Virginia Tech. Splashed across newspapers and news broadcasts throughout the country was the heroic act of Liviu Librescu, a Holocaust survivor and professor of math and engineering, who gave up his life, barricading himself against the door of the classroom to allow his students to escape. Clearly, for Professor Librescu, there was no time to think. His was a purely reflexive act borne of an essence, a core that is the trademark of the Jew. Indeed, "Who is like your nation, Israel?"

There is a discussion in the Midrash relating to the epic splitting of the sea after the liberation of the Jews from Egypt. At the time, when Almighty ordered the sea to split, the sea protested that the Jews didn't merit this miracle because they too had worshiped idols alongside their Egyptian counterparts who were fated to drown in the sea. In their defense, the Almighty responded that whatever departures the Jews had been guilty of in Egypt were due to the depraved context of their lives. The core of the Jew, however, remains one of incorruptible faith and integrity.

A talk show broadcast this week discussed the accessibility of guns in America as a possible cause for the Virginia Tech tragedy and others like it, unknown in such great numbers in other countries where ownership of guns is not so prevalent. The one exception, noted the talk show expert guest, is the country of Israel. In Israel, young soldiers everywhere carry loaded guns (for defense purposes, obviously), yet there have been no cases of this kind of horrific behavior. Indeed, "Who is like your nation, Israel?"

Worry is not only pointless but drains the much needed strength to engage life.

The bottom line, my dear reader, is that worry, as you know, is not only pointless but drains the much needed strength to engage life. We have to leave the running of the world to the Almighty. Instead of traveling the futile road of the impossible questions that we cannot answer, our energy has to be used to connect in ever greater measure to the core that is our Jewish birthright. We need to assume our responsibility as "a light onto the nations." We must embrace every moment of life and make the most of it -- relish the blessings, the joys, the relationships and opportunities for reaching out and giving of ourselves. Our Sages' exhortation in the Mishnah is to live every day as though it is our last; attend to the things that are important, that ultimately matter and let go of those that are illusory and drain us needlessly.

When the thoughts of gloom and doom threaten to hijack your mind, resist, banish and drop the thoughts. Focus on the here and now, this very moment that is yours by the grace of God, alone, Who wants you to enjoy the beneficence He has provided you -- and, Who wants you to know that He is in charge and that, in the end, everything will be good. And then do what you can to proactively address the crisis, through a spiritual and physical means.

Entering the Palace of the King

The Season of Lilacs

The Jewish Perspective on Pregnancy Loss
Don’t Believe in Other Gods Versus God is One
Seeing Without Eyes
Why Shouldn’t We Eat Whatever We Want?
Comments
MOST POPULAR IN Family
Our privacy policy
Aish.com Is Looking for Great Writers