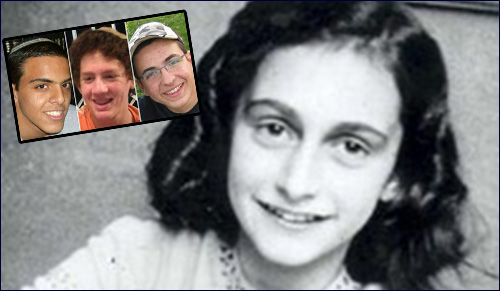 My summer in Israel, living in the jungle, during Operation Protective Edge.

Last summer, age 20, I lived in a suburb outside of Tel Aviv on a street called Anne Frank.

Here is the thing about summer, about young adulthood, about life in general: you float by.

Your consciousness does not allow itself to be surprised by commonplace landmarks or ordinary events. Your mind and energy are primed to notice new phenomena. If you were constantly analyzing the familiar trees and flowers, then you wouldn't hear the tiger silently creeping up behind you.

And so I spent my summer living on Anne Frank Street. My address would roll off my tongue in the most mundane moments: in my conversations with taxi drivers, when I asked the cashier to have my groceries delivered home, when the automated recording on the bus would announce my stop and I would repeat after it – Rechov Anne Frank – just so I could savor how the Hebrew words felt in my mouth.

Running and crouching for safety every time Palestinian terrorists launched a rocket from Gaza. In the makeshift bomb shelter of stairwell Anne Frank.

Hearing the prayers being recited for the three kidnapped boys. Outside of apartment Anne Frank.

Hearing that Eyal, Gilad, and Naftali had been murdered. As I sat on a couch with my roommates in apartment Anne Frank.

Tell me, dear God, can I be any more conscious?

Anne Frank: passionate, talented, beautiful. Murdered before her 16th birthday for being a Jew.

And almost 70 years later: Eyal, Gilad, and Naftali. Separated from Anne by time and place; murdered too because they were Jews.

Oh, dear God, how can I not be aware? To be conscious of the fate of the Jew is to know that the tiger never sleeps, never ends its pursuit. As surely as the sun rises in the sky each morning, so too the Jew will be hunted. And so I float. I float.

And then, when consciousness grips me, I remember who I am.

I am 20 years old, four years older than Anne Frank ever lived to be, spending my summer in her namesake apartment in a sovereign Jewish state, a state that did not exist in Anne's time, for if it did, surely her life – and the lives of six million other Jews – would have been saved. Our enemies have changed names and faces but their hatred is just as forceful – once it was the Nazis pursuing Anne, today it is the radical Islamists pursuing me, and even before then it was the Spaniards and the Greeks and the Romans and the Persians and the Egyptians. Every nation spat us out, trod on our backs, murdered our children, murdered our dreams.

And yet I live. I’m here. The real King of the jungle will not let the tiger win. Even through the fears and the uncertainty and the questioning, of this I am certain.

I sit in apartment Anne Frank and reflect on Anne’s life, on history lost and history recorded, on the destiny of a Jew – both individual and collective. Can the words of a 15-year-old child transcend mortality? Can the scratching of pen on paper ever echo the beating of a flesh and blood heart? Anne had an older sister, Margot, who also kept a diary. It was never found. With the scratching of one sister’s pen, words are etched into the annals of eternity. But what of the other sister? Anne wrote in her diary that Margot dreamed of immigrating to Israel and becoming a midwife. Was Margot’s dream fulfilled?

Margot Frank never got a chance to deliver a baby. She died, age 19, in an unmarked grave in Bergen-Belsen concentration camp on the blood-soaked fields of Europe.

And yet God has delivered us, the Jewish people. Hundreds of Jewish babies are born each day in the Jewish homeland. And even as the dripping of our tears fertilizes the ground where Eyal, Naftali, and Gilad have been laid to rest, there is solace in knowing that these boys are buried in Israel, on our own soil, and that we – their Jewish brothers and sisters – continue to live as a free people in our ancestral homeland, in Jerusalem, in Netanya, in Be'er Sheva, in Eilat, in Ariel, and even on a street in Bat Yam called Anne Frank.

And so Margot's dream lives, and so the Jewish people live, and so I am conscious.

Paper burns, people burn. But when the dream is heated by an eternal flame, the bush is never consumed.

Danielle Shachar is a junior at York University. She lives in Toronto.

Terror At The Tunnels
Can You Show Me This "God?"
How to Become Immortal
Judaism and Mental Health
Comments
MOST POPULAR IN Israel
Our privacy policy
Aish.com Is Looking for Great Writers