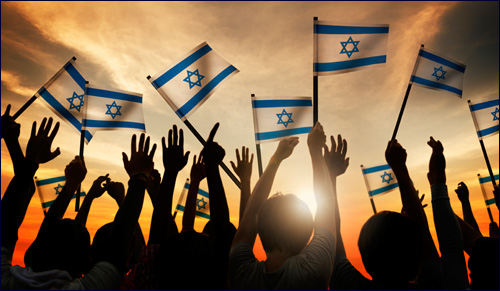 Where the heart of the Jewish people lies, nothing is mundane.

In 1998, a month after our wedding, my husband and I moved to Israel. We had just graduated from the University of Pennsylvania and most of our peers had either found jobs in Manhattan or enrolled in graduate schools nearby. We wanted to begin our marriage and build a family in the home of our ancestors. We wanted to be a part of the Jewish nation returning to its land from all over the world. We wanted to push past our comfort zones and strive for spiritual growth.

We were blessed to live in Israel for 14 years before we had to return to America, and the lessons I learned during those years are with me still. Here are my top six.

1. Humility. Graduating at the top of my class in an Ivy League school with athletic achievements to match had not made me into a humble person. Neither had growing up as the daughter of a Supreme Court Judge which had insured that I never had to wait on line, not at the DMV and not at doctors' offices. The first time I waited in line for two hours in a government office in Israel only to be told I was on the wrong line, I was furious. The second time I was impatient. By the third time, I was beginning to see the hundred other people around me and recognize that I was a small part of an enormous world that did not have to revolve around me.

2. Connection. Moving from a country where I spoke the native language to a place where I had to use my heavily accented, broken Hebrew taught me a crucial lesson in communication. Since Israel has immigrants from all over the world, often I needed to find a way to speak without words. And however challenging this was, it was also enlightening. Because kindness is louder than compliments. Smiles are brighter than polite asides. And learning to see the world through another person's language and culture connected me to people I would have never encountered if I was limited by my own words.

3. Unity. I always felt divisiveness among the different streams of Judaism, but in Israel, I felt that at our core, we are one people. I experienced this everywhere. On buses when my baby's pacifier dropped. When our car broke down. At the airport. On hikes. At the Western Wall. Jews, religious and secular, help each other and care for each other and ultimately, share one heart.

4. Simplicity. Everything in Israel was smaller and simpler than we had known in America. There was no Costco or two-car garage. No white picket fence and plush carpeting. But living a simpler life taught me the difference between what I wanted and what I needed. It showed me that not only could I make do with less but I was just as happy if not happier to be disconnected from materialism.

5. Faith. Things worked in Israel that made no sense. Plans that we would have had to make months in advance in America somehow worked in Israel within just a few days. I learned the expression "Yihieh beseder, al t'dag - it will be okay, don't worry” contained depths of trust that I couldn't yet fathom. Faith in God. Trust that tomorrow will be brighter and that the unknowns will work out. Belief that our lives are in very capable Hands every second of the day.

6. Meaning. Our home was not just a physical place; it was a building block of the Jewish nation. Our children were not just our children; they were torch bearers of Torah for the next generation. Our Shabbos table was a gift to receive and to give. Our talents were tools for actualizing our potentials and lighting up the world. Nothing was mundane. Not the road beneath our feet, nor the groceries that we carried home.

I carry these lessons within me each day. We live in America, but my heart is in Jerusalem. My children are still torch bearers of Torah. My home is still a cornerstone of our nation. And Israel is still the only place where I turn to grow beyond my own borders. Especially now, with the fear and terror of the ongoing stabbing intifada, Israel needs each of us wherever we are. Israel needs our prayers and our visits and our gratitude; for the myriad lessons that it teaches us and for the home, within ourselves and within the world that it gives us every day.

At Home in Jerusalem

Welcoming the New Israelis
Scientific Curiosity and the Divine Encounter
Mind Over Milkshakes
Love the Convert
Comments
MOST POPULAR IN Israel
Our privacy policy
Aish.com Is Looking for Great Writers