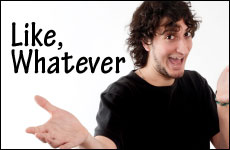 The two most irritating words in the English language.

What would you say is the most irritating word, phrase or expression in the English language? According to recent polls, it’s “Whatever.”

Seriously. At the end of the day, in a poll of over a thousand people, 39% said that the word they least like to hear is “Whatever.” The second most hated word, at 28%, was “like”. That’s ironic.

I, too, strongly dislike the word “like”. It’s in like every sentence. To be fair, though, it does have at least four meanings that I can come up with:

1. It can be used as a simile. For example, my wife just told me that after she makes challah, I’m going to have to buy more flour, “because we’re going to be like out of it.” It turns out that she meant that there will be some flour left, but not enough to make anything. Thus, it will be like we’re out of it.

2. It can be used in place of the word “um”. Teenagers do this all the time: “So, like, I was, like, going to, like, school, and I like, didn’t have my, like, homework. Like.” The only possible meaning for this is “um”, because if you assume the speaker is using that many similes and you try to make the sentence make sense, your head will explode.

Also, if you enjoy this article, you can hit “like”. Though I’m not sure what kind of “like” it means.

But if you want to know the truth, a lot of people have certain words and expressions that they overuse. And I’m not perfect either. I recently gave my students an assignment wherein they were handed a bunch of articles and had to figure out which author wrote which one, based on writing style, and every one of them figured out which one was mine right away, based on the fact that I used the word “seriously” like 3 times in my article. Seriously. And I do use the word “seriously” a lot, because people for whatever reason tend to not take me seriously, especially in my articles. (Does writing “seriously” help me achieve believability? Maybe my byline should read, “By Mordechai Schmutter. Seriously.”)

In fact, I use the word seriously so often that I don’t think I should have to type it out every time I use it. I think there should be a button on my keyboard that says “seriously”. They did it with the word “at”. At some point, people were apparently complaining about having to type out the word “at” every single time, so they made a little symbol for it: “@”. That way, instead of having to type an “a” and then a “t”, you can just push the one button. And hold shift while you do it. So technically you’re pushing two buttons, and you’re pushing them at the same time. But it is what it is. (That’s another thing people say. Is it really what it is? I think it means, “I have nothing to say, but I hate awkward silences, so I feel like I need to fill them with something.”)

Also, as a writer, it sometimes bothers me when people misuse words. The other day I was at Barnes and Noble, returning one reading book and buying another, more expensive reading book. (“Aren’t all books reading books?” You ask. No. Some are coloring books. And anyway, these were actually books that would help me teach my students reading comprehension.)

I literally screamed my head off.” Wait, so this is a replacement head?

Here’s another word that people misuse: “Literally”. Like someone will tell you, “I literally screamed my head off.”

So this is a replacement head? I, liked, the other one better.

“Literally” is not meant for exaggeration. It means, “This is exactly precisely what happened.” And when used properly, it’s unnecessary. In other words, you can say, “I literally screamed really loud.” But how is that different than saying “I screamed really loud”? If you want to exaggerate, the word you’re looking for is “figuratively”.

“I figuratively had a heart attack.”

There are also some expressions that people use that are redundant or unnecessary. I’m just saying.

I know you’re just saying. I just heard you say it.

Some expressions are just flat out not true. For example, people say, “If you want something done right, you have to do it yourself.”

Yeah. I hung a towel bar in my bathroom myself. It’s crooked, and I’m the only person in the house who knows how to take the towel off without pulling the whole thing down. Sometimes you need other people.

And then there are the expressions that are annoying mainly because they raise too many questions. Here are some examples:

There’s more than one way to skin a cat—I’m sorry, what kind of sicko came up with this expression? Why are we skinning cats? And why is someone so sick of the way he normally skins cats that he’s looking to shake things up?

I only know of one way, and it’s based on a guess. I’d probably mess it up if I tried.

But that begs the question: what words or phrases are you sick of hearing? I could care less. But I don’t. So you should literally write in.

Jewpid
In the Shadow of David and Goliath
Where Do the Laws of Nature Come From?
Saadiah Gaon, Rashi and Maimonides: How Three Rabbis Revolutionized Judaism
Comments