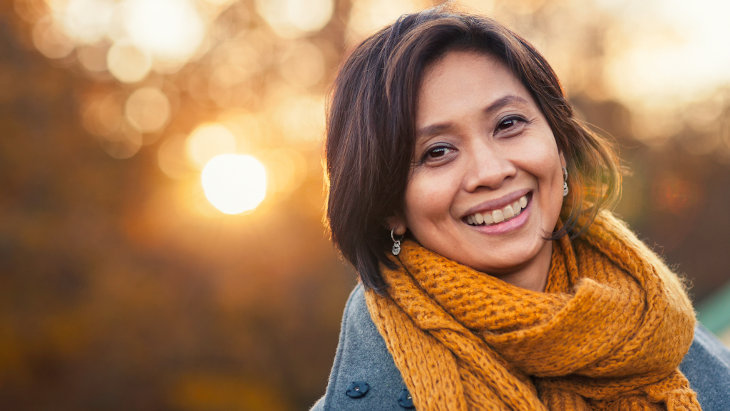 How Judaism got an ex-Catholic prospective convert to love clothes – and enjoy life.

When I was a child, I was all dolled up, my hair put up in ponytails or woven into braids. I wore the pretty little-girl dresses my mother bought.

When I reached my teens, the fussing stopped but my mother continued to buy me clothes. Why I hadn’t asserted my independence at an age when people generally started to I can’t quite explain; I chalk it up to the agreeable, passive temperament I had. The trajectory of my later relationship with clothing, however, wasn’t evident at this time. I had attended an all-girls Catholic school in the Philippines that required us to wear school uniforms. As a result, I was left without much room to choose what I was going to wear.

And then I entered college. By this time, my mother had stopped dressing me and I became, for all intents and purposes, a slob. Gone were the attractive blouses I had worn and outgrown as a teenager. I wore ugly T-shirts and polo shirts to university. I just didn’t care.

Eventually, I graduated and got a job as an English language tutor for Koreans. In the office I wore collared shirts, black slacks, and flats – nothing fancy, but I was presentable again.

I eventually quit that job because I wanted to become a freelance writer; but now that I was to work from home, I saw no need to dress well. I stored my work clothes away in a closet and whenever I went out, I wore my college clothes.

I felt that women only cared about looking pretty to get noticed by a man, and I wasn’t interested.

I wasn’t interested in looking good; I just didn’t care about it. I felt that dressing up merely fed into the larger agenda of marriage, that women only cared about looking pretty to get noticed by a man. I wasn’t interested in getting married, or even in having a relationship; I was fixated on succeeding as a fiction writer and thought relationships were mere distractions from my career.

Then came Judaism. I had wanted to include a Jewish character in a story I was writing and to help me build the character, I researched Judaism – and was drawn to its ethics and worldview. I came to believe that the Torah was true and after talking to the rabbi in Manila about conversion I became a Noahide, someone who remains a non-Jew but, in recognizing the reality of Torah, keeps the 7 commandments given to Noah that all non-Jews are obligated to observe. Even though I do ultimately want to join the Jewish people, I have thrived being a Noahide. I have a newfound direction and a means of developing a relationship with God, something I never really had before.

Throughout this period, I continued to wear the schlumpy clothes that were my trademark. But Judaism eventually brought clothing to my attention. With new rules to follow, I began to wonder about what I was going to wear. Though I had no problem adjusting to the modesty rules, I still had to change what I wore – after converting I would need tops with longer sleeves, for a start, but the turning point of it all was the moment I absorbed that I would have to wear skirts.

At first, I was repelled. I haven’t worn skirts since I left high school (under which I wore shorts), preferring the practicality of pants. But soon after, I adjusted. Skirts would be so comfortable, I thought. And airy! And I would enjoy swooshing them around when I skipped around barefoot in the house. Now, a question emerged: what would I pair them with?

I tucked this among the things I idly wondered about, and then "coincidentally" a skirt outfit on my Pinterest feed appeared, a 3/4-sleeved top paired with a pleated midi skirt and knee-high boots. I liked it, and followed where it led...and down the rabbit hole I went. I soon learned how I liked to wear skirts – with pumps and heeled sandals, and long- or 3/4-sleeved tops and cotton shirts.

For the first time, I voluntarily walked into a clothing store. I discovered my love of color, dresses, florals (!) and lace.

Thinking I had to start preparing for my conversion as early as possible, I moved on from gathering pictures on Pinterest to actively looking for clothes. I first looked online for modest clothing stores and found a whole industry, and then I looked for modest options in the clothing stores that were available in the Philippines. For the first time, I voluntarily walked into a clothing store. I discovered my love of color, dresses, florals (!) and lace. I bought my first-ever blouse, something my mother approved of, and before the pandemic, I started wearing dressier tops and sandals on our Sunday trips to the mall. I also bought my first dress, which startled my mother, and I’m planning to buy my first heeled sandals in the near future (which I’m sure will startle her again).

One Jewish concept I had been attracted to is the emphasis on this world, this life, rather than the next, because this life, as a creation of God, is good. The world is not something you detach yourself from. This world is something to be engaged in and celebrated. So go have all these kosher pleasures – material, relational, spiritual.

And as I waded more and more into fashion, I began to absorb the other implications of that teaching: namely, that God in Judaism is more generous and parental than I had believed; He wants us to have pleasure and live fulfilling lives – what all parents want for their children. I now want to look good for myself, and feel that life has opened up for me and that I am a participant in it.

As a child of God, you should live with dignity.

Judaism has also given me the prospect of a richer life. I learned I have a unique mission in life, and that among life’s necessities, it was clothing I had a particularly unhealthy attitude to. I also came to reconsider my ideas about marriage and relationships, and now believe that marriage helps make you become a full human being. I began to see my hyperfocus on achievement and success as myopic. I've realized it's one important ingredient rather than the only element of a fulfilling life. Now, I want to have it all – beautiful possessions, marriage to a good man and relationships with good people, success as a writer, meaning in life, and a relationship with God.

I used to scoff at fashion, dismissing it as a shallow pursuit. Now, for me, fashion is not a superficial interest; it’s about minding how you present yourself to others, and how you affect others by how you present yourself. You are responsible for the body God has loaned to you, and you, as a child of God, should live with dignity. Clothes also allow you to take pleasure in the world – look attractive and savor life! God, after all, had created this world out of love and generosity; we in turn should be loving and generous towards ourselves.

From a woman who didn’t know how to truly enjoy life, I have come, at last, to embrace it.

Kat Bautista is a freelance writer and English language tutor. She hopes to convert to Judaism after the pandemic has ended. When not working, she can be found writing fiction or reading a book. She lives near Manila, the Philippines.

Thank You for Assateague Island

You've Got a Friend: A True Story about the Power of Connection

Me and the Moai: What Was I Doing on a Remote Polynesian Island?
Why We Can’t See True Reality
Jewish Chutzpah’s Ancient Precedent: Commoner Sues Toxic Boss 2600 Years Ago
Grilled Israeli Lamb and Veggie Kabobs Recipe
Comments
MOST POPULAR IN Spiritual Odysseys
Our privacy policy