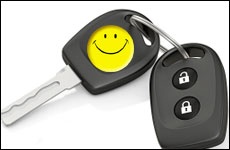 Time for my favorite errand – a trip to the Department of Motor Vehicles!

I can’t believe that every time I go to the DMV, I’m surprised there’s a line. Every time. You’d think I’d know by now. I’m always like, “Whoa, it’s out the door? What is this line for?” And the guy in front of me says, “This is the line to find out which line we have to wait in.” Apparently, we have to wait our turns for that too.

They asked me for my weight. Doesn’t that change over every Jewish holiday?

My wife and I recently had to get our licenses renewed at the DMV, or “Department of Motor Vehicles”, as opposed to any other kinds of vehicles, such as the Department of Bikes and Skateboards. This is something that the state makes us do, in person, so they could know for sure whether we’re still alive since the last time. (Apparently there’s a big problem these days of dead people driving cars, in case you didn’t notice by the pace of the people on the road in front of you.) And then they have to take another picture of us, to show that we’re still alive, even though we can all agree that most license photos do not actually do a very good job of showing that.

Whereas with people, at least in the State of New Jersey (where I live, for some reason), we have to show up with at least, according to the paper they sent us in the mail, “Six Points of ID”. Apparently, every kind of ID is worth a certain amount of points, and if you have enough points, you can win valuable prizes later. You’d think the fact that you exist and are there should be good for at least a point or two.

But it’s not. Obviously, if you show up, they know someone’s not dead. But they don’t know that that’s you who’s not dead. It could be someone else pretending to be you, not dead.

So you have to go on a scavenger hunt to find pieces of paper that can prove that you are who you say you are, rather than just being someone who stole pieces of paper from the person you say you are. This scavenger hunt shows commitment. It shows that you’re committed to getting your license renewed, even if it means tracking down a piece of paper that’s as old as you are, which is not easy, because for the first few years there, you thought paper was something you were supposed to eat.

Thankfully, the DMV does send out a list of everything you can bring in, and how many points each one is worth:

But even though you have to prove you’re alive beyond shadow of a doubt so they can then take a picture of you, you don’t have to retake the test, I guess because they assume that once you take it, that means you know everything. Though that’s ridiculous. In reality, once you take a test, everything you studied goes straight out the window. I say this as a teacher. And as a driver whose spent time on the road, watching people forget rules as they drive.

But you do have to fill out a form. I did that while waiting on the second line of the day, using my big pile of points as a surface. One question that the form asked was my weight. Why? Doesn’t that change over every Jewish holiday? Or at least in the 4 years until I have to get another license? Why do they ask for details that are constantly fluctuating? Like hair color. Or height. Because I noticed on my way home that I wrote a shorter number on the form than I did the last time. This doesn’t mean I’m shrinking, I don’t think. I used to believe I was six feet tall. I described myself as “about six feet”, for dating purposes. But after enough people who were clearly taller than me insisting that they, too, were 6 feet tall, and why would they lie to make themselves shorter? I found out that I’m more like 5’ 11”, by which I secretly mean 5’ 10”.

But does your height matter? When the cop pulls you over, you’re sitting in a car. He’s not going to make you get out so he can verify your height. And what about your weight? Does the cop need to know if he can lift you, or put you on the back of his bike and haul you to the station? Maybe it’s just an incentive to keep our weight down as much as we can, to get our country’s stats down. The weight I’m at now is the weight I have to stay at for the next 4 years. On the other hand, I’m afraid to lose weight too. It’s like after I buy a Shabbos suit.

Anyway, it turns out they didn’t even put my weight on the license. It’s just some impolite question they ask off the bat for no reason, to get you in a grumpy mood before you’re even in the building.

The weight did show up in my picture, though.

The Yiddish and English Quiz