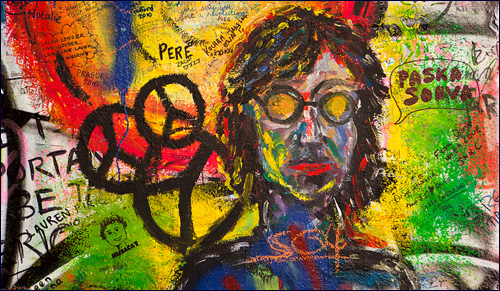 John Lennon articulated the vision. But it takes deeper wisdom to know how to accomplish it.

What was generally described as a “moving moment” took place after the November terrorist attack in Paris. The day after the massacre, an unnamed pianist sat outside the Bataclan theater, scene of the worst violence, and played the song Imagine by John Lennon. As recounted in the English newspaper The Independent, “members of the public and press listened in silence to his rendition of John Lennon’s classic peace anthem.”

Imagine was released 44 years ago in 1971. For a song this old to be used to crystallize the response to a recent catastrophic event says a lot about the power of that song. What is the power of Imagine and why do so many people remember it after 44 years?

These are all Jewish values and have become the values of the modern world.

The problem with the song is it includes unsatisfying explanations for why we aren’t achieving those values.

The problem with the song is that it not only includes the values, it includes an explanation for why we aren’t achieving those values. We don’t live for today because we believe in heaven. We are fighting with each other because of countries and religion. We are not sharing the world because we are attached to possessions.

None of those explanations are fully satisfying. Plenty of people are having trouble living for today even though they don’t believe in heaven – that is why psychologists are so busy. Communism was a militantly atheistic pan-nationalistic movement that didn’t focus on religion or country, yet it killed tens of millions of people in the twentieth century. And Communism also showed that abolishing possessions didn’t lead to people sharing the world.

Judaism offers a deeper answer to why these values are so difficult for us to achieve. In my new book, Sages Online: Ancient Wisdom for a Modern World, I offer an explanation that starts out with the fundamental Jewish understanding of human beings, that we are a soul joined to a body. The soul is the source of our spiritual desires – to do good, to live in peace, to live with meaning, to share with others. The body represents our physical nature and its desires – for sleep, for comfort, for physical gratification.

These two parts of our nature are in constant conflict. Our soul says get up and go to work – work is a meaningful goal in life. Our physical nature pushes us to sleep in. Our soul wants to share what we have with others. Our body says to keep it for ourselves.

The soul is the part of ourselves that we most identify with – we want to be good, to live a life of meaning. When we are clear about our goals, we conquer the body’s desires – we get up and go to work, we help the people around us. When we are not clear what we want, we feel the conflict of the two sides.

This conflict is made more difficult for us because the physical has a great defense attorney, what Judaism calls the yetzer hara, “the evil inclination.” Its job is to give reasonable-sounding arguments to make the desires of the body seem appealing to our spiritual part – “if I get up now, I won’t be able to accomplish anything, but if I sleep a little more I will get a lot more done”, “a person needs to take care of himself first, there will be plenty of time in the future to help others.”

This Jewish model explains why it is often so difficult for people to live with their ideals. It applies both to individuals and to society, which operates based on people’s positive and negative desires. The real cause of lack of peace – both inner peace and its public manifestations in the world around us – is this constant conflict we have within ourselves, and our confusion in dealing with it that comes because of the rationalizations given by the “yetzer hara”.

The body and its desires are not negative but they need to be controlled and directed.

But Judaism also teaches the path to inner peace. The body and its desires are not negative; we need them to live. But they need to be controlled and directed. We can attain inner peace by choosing to rein in the body and live as a soul. If the soul consistently forces the body to go along with it, the body will come to take pleasure in what the soul takes pleasure in.

A model for this would be going to gym. The soul understands that being physically healthy will enable it to live more effectively. The body, at first, would rather avoid the pain and watch TV.

But if person pushes himself or herself and starts going to gym, after a time, even the body will come to enjoy it. If he or she doesn’t go to gym at the usual time, the body will say, "Why aren’t you going? You don’t feel healthy."

The more the body is listening to the soul, the more a person will have inner peace.

To live in this way takes training. It takes a wise understanding of how to deal with the strong desires of the body and how to direct them towards what the soul wants. It requires a general clarity about the purpose of life to avoid the misdirection of the “yetzer hara”. The function of the Torah is to provide that comprehensive system.

We relate to Imagine because our souls want to live for today, to bring the world to peace, to share the good of the world. But Imagine imagines that human beings can live as souls by just wanting to – “Imagine there’s no heaven, it’s easy if you try…imagine there’s no countries, it’s not so hard to do”. Yet human beings, pushed by their desires, will always be open to the yetzer hara presenting new heavens, new nationalisms, new justifications for possessions. Without making the effort to deal with our soul-body conflict, through understanding it and mastering it, we are constantly falling for the next illusion.

A terrorist atrocity demands a response. John Lennon articulated the vision: “Imagine all the people living life in peace.” But it takes deeper wisdom to know how to accomplish it.

Rabbi Chaim Willis was raised in a secular Jewish home in New York City. He came to Israel in 1975, and learned with Rabbi Noach Weinberg in Aish Hatorah. Together with Rabbi Kalman Packouz, he started the first Aish Hatorah branch in St. Louis, Missouri in 1979. He is presently the executive director of Aish Hatorah South Africa in Johannesburg. He has recently published a book on Pirkei Avos, Sages Online: Ancient Wisdom for a Modern World. Sages Online: Ancient Wisdom for a Modern World is a new commentary on the first chapter of Pirkei Avos. It focuses on the relevance of the Sages wisdom to our lives in the world today. Click here to order yours.

The Atheist Crusade
Evolution 2.0: The Coming Darwinian Revolution
Chukat 5782: Let’s Play the Blame Game!
The Sin of Moses: The Two Ways to Communicate
Comments
MOST POPULAR IN Spirituality
Our privacy policy