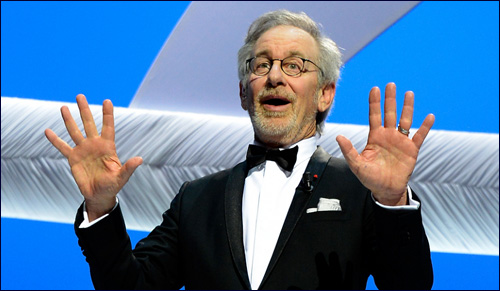 SATIRE: As you may have read, Lebanon had banned Steven Spielberg's new movie, The Post because of his alleged “ties to Israel” – whatever that means. Apparently they had some objections to the movie Schindler’s List – maybe they were hoping that it would have ended differently. True, there are some reports that Lebanon has reconsidered the ban, but there are other conflicting reports that some groups wish to further the ban. How so?

In the Lebanese Back to the Future remake, the Libyans actually keep the Plutonium.

Apparently the Lebanese are planning to remake many of Spielberg’s famous movies so that they will conform with Lebanese values. As luck would have it, we at Jewlarious have received a leaked document as to what those new films will look like and we present them exclusively below.

This is the story of a US Army squad trying to save an American soldier. But in Lebanon this premise is problematic because a key Lebanese government faction, Hezbollah, is classified as a terrorist organization by the United States. As such, it is seen as offensive to save American soldiers. So the Lebanese remake of the film is called Killing Private Ryan. Killing Private Ryan is all about how Tom Hanks leads a group of American soldiers to hunt down Private Ryan and slaughter him as well as any other American privates they meet along the way.  This one will also play well in Hollywood. In today’s Hollywood, they don’t want to be accused of discrimination so they will be equal opportunity private killers.

Back to the Future

Marty McFly, the protagonist, sounds too Jewish. So the Lebanese have changed his name to Hassan McFly. Instead of Doc Brown, he’s Doctor Halibi. In the Lebanese remake, instead of travelling back in time to steal plutonium from the Libyans to fuel his time machine, Dr. Halibi goes back in time to make sure the Libyans actually keep the Plutonium so they can make their nuclear bomb and destroy the entire world. And everyone lives happily ever after.

Since the Holocaust never happened, the Lebanese Schindler’s List is a film about a German industrialist named Oskar Schindler who loves going grocery shopping. Indeed, he takes his grocery list with him wherever he goes and buys things like bratwurst and pumpernickel bread and schnitzel. And sometimes he buys sauerkraut.

The real tragedy of Jaws is that Jewish actor Richard Dreyfuss, who plays Matt Hooper, doesn’t die in the film. In the Lebanese remake, Matt Hooper gets ripped limb from limb and is gobbled up like a piece of baklava. Richard Dreyfuss being eaten by a shark will be perceived as a happy ending to allow the children of Lebanon to sleep well at night.

E.T. is about a boy and his siblings who try to help an extra-terrestrial alien return to his planet, while keeping him hidden from his mother and the government. E.T. is offensive on many levels, as nothing should ever be hidden from the government in the Middle East. Just ask the secret police. In the Lebanese remake, instead of an alien, a group of kids discover a Hezbollah terrorist, who they hide in an underground bunker. Before boarding the spaceship, E.T. tells little Gertie to “be good.” In our movie, before leaving to perform a suicide bombing against Jabhat Al-Nusra in Syria, the terrorist tells the children, “You are going to be martyrs…kill the Israeli oppressor.” Then he eats some Reese’s Pieces.

Catch Me if You Can

In this remake of the great adventure tale, the kids also discover a treasure but instead of finding the pirate One Eyed Willy’s gold, a bunch of Lebanese kids find a map to a weapons cache that Hezbollah has stored under an orphanage. In the original Goonies, Chunk, the Jewish member of the gang, spills the beans to the Fratelllis that he took his Uncle Max’s toupee and glued it on his face when he played Moses in his Hebrew school play. In the Lebanese version, the gang’s new Hezbollah friend rips off the actual hair off one of their enemy’s actual heads. Hilarity ensues.

Raiders of the Lost Ark

Of course, there's no such thing as the "Ark," because Jewish history is made up, right Mahmoud Abbas? In the Lebanese remake, the entire world is worshipping idols, has no concept of equality before the law, has no court system, and has no Sabbath or weekends. Oh, and there’s also no Waze.

Half Genius, Half Jerk