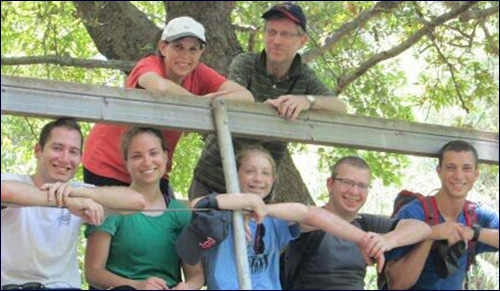 This year marks Israel’s 66th Independence Day. After 2000 years of exile, in what is an unparalleled story in human history, the Jewish people returned to the land from all corners of the earth to practice the same religion and speak the same language. This is the story of one of those immigrants who chose to leave behind a prestigious career at Harvard in order to make Israel his home.

Dr. Jeffrey M. Hausdorff is a researcher and lecturer in the field of neuroscience and geriatrics. As a faculty member at Harvard University, Dr. Hausdorff and his wife Sharon decided to leave all of their success behind to make Aliyah to Israel with their three children (and a fourth on the way) in the year 2000. Though he needed to adjust to a new country, a new language, and a non-Harvard job, as it turns out, his most successful days were ahead of him.

That big decision in 2000 was more of a lifelong dream than a career decision. He was leaving a position on the Harvard faculty, after all. “Are you crazy? Boston is a great city and Harvard is a great place,” people would ask him. But Dr. Hausdorff said his wife wanted to be able to “be part of and contribute to the Jewish state.” Dr. Hausdorff told Aish.com: “Israel is a great place to raise a family. With a bit of luck and effort, it’s also a good place to live and contribute to society and to feel part of the larger Jewish enterprise.”

Dr. Hausdorff believes, “Judaism is integrally related to Zionism and is non-separable.”

After the process of moving across the world with three children, Dr. Hausdorff felt vindicated before his first Rosh Hashanah in Israel. “My first year here, there was gathering of the hospital and Rabbi Lau – the Chief Rabbi of Israel – gave a bracha (a blessing). Outside of Israel, you kind of fight the calendar for Jewish holidays. In Israel, it’s very different. We have a toast for Rosh Hashanah with the Chief Rabbi! I’m living the Jewish calendar the way it’s supposed to be.”

For the past 20 years Dr. Hausdorff has studied neuro-dynamics and diseases, such as Parkinson’s. Dr. Hausdorff hopes that his current research on aging, will “improve functional independence and for older adults with neurological diseases” as well as “reduce the number of falls.”

In November 2013, Dr. Hausdorff was the recipient of the Gerontology Society of America’s Excellence in Rehabilitation of Aging Persons Award.

His research team, based at Tel Aviv University, was recognized with awards by the International Society of Posture and Gait Research (ISPGR) at their annual meetings in both 2012 and 2013. One of the award winning presentations explored a new technique of walking on a treadmill with a virtual reality mask – similar to those used for video games – to improve walking ability in older adults.

This past February Dr. Hausdorff’s team hosted an international conference at the Dead Sea. Besides the obvious benefits to the world, Dr. Hausdorff finds it gratifying to represent Israel around the world. “Through our research, corroboration, and hosting, we feel that we are showing the positive side of Israel – mostly, the normal, daily life in Israel,” Dr. Hausdorff said. “It is different from what people see on CNN.”

The Hausdorffs went from dreaming of participating in the Zionist enterprise to becoming big contributers. Dr. Hausdorff says of the Aliya process: “It is important to come with realistic expectations, but it can be a wonderful success story.”

Dr. Hausdorff now serves as the director of the Laboratory for the Analysis of Gait and Neurodynamics in the Movement Disorders Unit at the Tel-Aviv Sourasky Medical Center (TASMC), and a Senior Lecturer at the Sackler School of Medicine.

Dear Citizen of Gaza
Don’t Believe in Other Gods Versus God is One
Seeing Without Eyes
Why Shouldn’t We Eat Whatever We Want?
Comments
MOST POPULAR IN Israel
Our privacy policy
Aish.com Is Looking for Great Writers