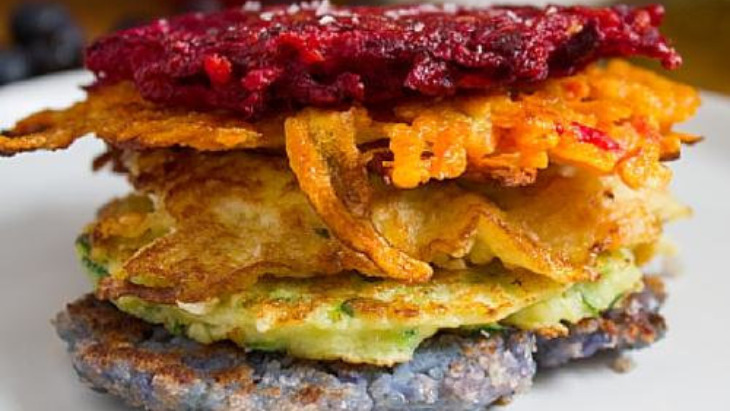 Most timeless traditions aren’t that old, but so what? They play an important role in celebrating the holiday.

I shouldn’t be surprised, but the Hanukkah customs I grew up with are now controversial. The critics are vocal, too: potato latkes are a new-fangled invention, the dreidel was appropriated from non-Jewish neighbors, and chocolate gelt didn’t become a thing until the 1920s.

The Atlantic sounded the alarm with an anti-latke screed in 2015. “There’s nothing traditional about the contemporary American latke. Virtually every element of it is a lie. Delicious? Yes. Traditional? Not in the slightest.”

Those hard truths apply to chocolate money as well, and I'm sure some curmudgeon is hard at work, right now, digging for yet another way to ruin the holidays (I know, the traditional Hanukkah song, Maoz Tzur, is sung to the tune of a Christian hymn, are you happy now?).

But why be cynical?

The Jewish people have been around for a long time, scattered across the globe, and over the years have invented myriad customs that add an additional layer of meaning to holidays.

The Jewish people have been around for a long time, scattered across the globe, and over the years have invented myriad customs – which include different foods, songs, games, and styles of dress – that add an additional layer of meaning to holidays like Hanukkah. Some date back hundreds of years and have found their way into the Code of Jewish Law. Many are local and only observed in specific communities. Others are new, or are adaptations of older traditions, or only became possible as Jews embraced new technologies or moved to new places. But whatever the reason, the customs became widespread and identified with the holiday.

Latkes are fun – one year I convinced my wife to make rainbow latkes, and she made them from white potatoes, blue potatoes, sweet potatoes, and zucchini… we didn’t do that again – dreidel is fun (well, it is for some). Chocolate money is fun. It’s even fun belting out a Jewish song to the tune of a Christian hymn.

But more to the point, customs are also an excuse to get together with family and friends, to extend those gatherings – “How can you leave? We haven’t played dreidel yet?” – and to focus on the meaning of the day.

That’s even true if the custom’s meaning was invented after the fact. For example, according to the Atlantic, latkes were originally made with schmaltz (chicken fat), followed by Crisco (shortening made from hydrogenated vegetable oil), and finally olive oil – which was when Hebrew school teachers and pulpit rabbis made the connection to Hanukkah.

But so what? Customs aren’t ancient or intrinsic to Jewish belief. They’re made up. Everyone knows they’re made up. They vary from one community to another. New ones will be invented. Some clever punster will find a way to make them “meaningful.” That’s our history. It happens over and over again.

Customs enhance the holiday. They’re not reinventing the day or changing its intrinsic meaning. Hanukkah is still about the battle for Jewish identity, and the miracle of Jewish survival.

Customs enhance the holiday. They’re not reinventing the day or changing its intrinsic meaning. Hanukkah is still about the battle for Jewish identity, and the miracle of Jewish survival. That’s what the greasy latkes, and cheese blintzes, and jelly doughnuts, and dreidels, and chocolate money, and Jewish songs sung to the tune of Christian hymns remind us of. That’s what they do. That’s what we talk about. That’s the point.

That may bother you – some people like to kvetch, some people are party-poopers – and that’s great. You can be that person at the annual family gathering who drones on about the real history of latkes, or dreidels, or whatever. You’re accomplishing the same goal. You’re forcing everyone else to think about Hanukkah’s real history and meaning.

Which, if you think about it, is great. If that’s how you feel – and if you feel a need to bring it up every year – so be it. That can be your custom.

We can even discuss it over latkes.

The God Factor: Part 1
The Power Of Prayer
Va’etchanan 5782: A for Effort
Can You Show Me This "God?"
Comments
MOST POPULAR IN Israel
Our privacy policy
Aish.com Is Looking for Great Writers