Labels are for Shirts, Not Jews 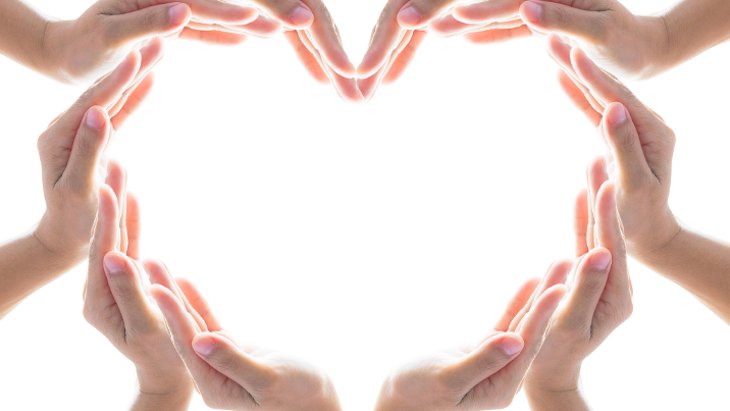 From Poland to Israel and America, the enduring bonds of one family.

In 1939, my grandfather, Samuel Gottesfeld saved the lives of his immediate family. My grandmother Caroline and her three children boarded one of the very last ships to leave Poland before the Germans invaded on September 1, triggering the start of World War II almost 80 years ago. My grandfather, understanding the deteriorating situation for Jews in his country, left their southern Poland town of Zaleszczyki in 1936 and headed to America alone. Ultimately, he obtained citizenship, began earning a living as a furrier and saved money so that he could send for his family.

Zalezsczyki, a small town of barely 10,000 is situated on the Dniester River, separating Poland from Romania. As a result of the war, the town today is a part of Ukraine. Between the World Wars it was noted as a tourism location owing to its relatively mild climate, fruit growing and a riverfront beach. My mother Sally, who was only 12 when they fled the country, used to reminisce about their lovely home and its large garden full of plum and other fruit trees.

She also spoke of her Viennese cousins who came there to visit and enjoy the riverfront resort during the summertime. She especially remembered a final visit in the summer of 1938 with her young cousin Betty. Betty was also saved from the German onslaught because she was sent by her parents to Israel in 1939 as part of the Youth Aliyah movement. With few other exceptions, I grew up understanding that virtually all of my mom’s extended family perished in the concentration camps and killing fields of Poland.

During the ensuing years following the end of WWII, my mother and her family settled into life in Bensonhurst, Brooklyn and kept in touch with their cousin Betty (Batya) in Israel. They went through difficult times emotionally following the war, and the trauma of losing their family, their home, and their way of life in the old country affected their quality of life. Regular contact with cousin Batya in Israel was maintained via handwritten letters, in addition to expensive annual phone calls for Rosh Hashanah. We kept up on developments in the lives of our family members in Israel and were always proud that they were part of the state’s founding generation.

In the early days of the State of Israel, when many supplies were scarce, my grandmother and mother sent supply packages in order to help, but given the hard-working and modest immigrant lifestyles of both family units, the idea of travel to see each other was out of the question. This was the situation that endured for 30 years, from 1939-69. 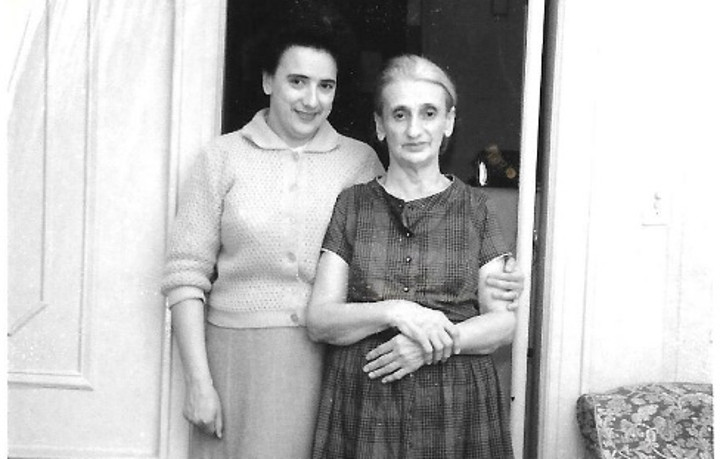 My mother and grandmother in Brooklyn in the 1960s

A long hoped-for reunion finally was being planned by my mother for the summer of 1969, right after I graduated from high school. International vacation travel was not a common occurrence in those days, but visiting Israel was a dream of my staunchly Zionistic parents.

As they were planning this first ever trip to Israel, my dad suffered a fatal heart attack at the age of 43. It was just two weeks before my graduation and we had to cancel the trip. But getting to Israel was something engrained in my heart and in the summer of 1971, I became the first member of our family to make it to Israel. Following several weeks as a volunteer on Kibbutz Rosh Hanikra, I was free to tour and my first was to finally meet my Israeli family in Jerusalem.

I somehow managed to find their tiny two-bedroom attached house in the Kiryat HaYovel neighborhood. I slowly walked up to the door, not sure of what I would say when someone answered my knock. I spoke no Hebrew then, but having grown up with Yiddish at home, I was pretty sure it would be alright.

When I knocked, Batya came to the door. All I could think of was to hold up a picture I had brought that was taken of my mom and her cousin as young girls in Europe. I pressed it against the glass of the door. She took one look at me and then the picture. She understood and burst into tears, yelling for the other family members to come.

Those many years of a family’s separation had finally come to an end. I stayed with them until the end of my trip, feeling the warmth of their family and learning so much about Israel from them. Batya’s husband Yitzhak was one of Israel’s first licensed tour guides and they introduced me to many places in Jerusalem and the surrounding area on that first visit.

The meeting in Jerusalem marked the beginning of now close to 50 years of increased connectivity to this remaining branch of our family. Times improved and travel back and forth became more frequent, almost routine. My mom finally made it to Israel in 1974 and experienced that incredible feeling of reunification with her beloved cousin after 35 years. Before long, Batya and Yitzhak came to America and visited us for the first time. Through the years of raising our family, we did all we could to save so as to afford periodic trips to Israel, often forgoing local vacations during interim years so that we could introduce our kids to Israel.

When they were young, it was typical for us to stay with our cousins in their modest Jerusalem home. As each of our children matured and came to study post high school in Israeli yeshivot and seminaries, our cousins were there for them – a home away from home. Likewise, over the years our cousins came to America and visited, including a number of their grandchildren who found their way to the U.S. and stayed with us for varying periods of time during their post-army travels. 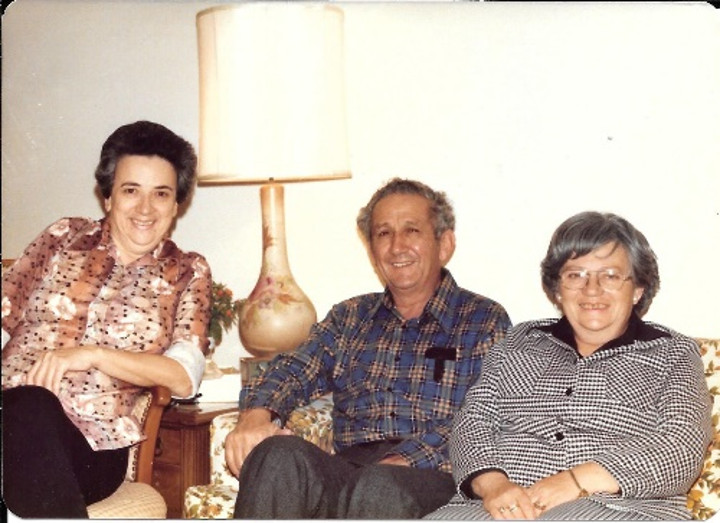 Batya and Yitzhak finally were able to visit my mother for the first time in Queens, NY in the late 1970s

About 10 years ago, a longstanding dream of ours was realized when we made Aliyah to the beautiful city of Modiin. You can bet that several of our cousins were waiting for us at the terminal the day we landed.

Our family’s story may seem rather routine in the context of modern Jewish history. But there is something that I believe contains a positive lesson in these troubled days when so much discord exists between Jews of different communities, countries and streams of religious observance.

Our cousins and we have followed rather different paths regarding religious observance. Theirs was rooted in the early years of life on secular kibbutzim. Ours remained strongly traditional upon arrival in America and evolved over the years to a range of orthodox streams among our children. And all of this was first triggered by our having crossed paths with the Chabad Movement while students in university during the 1970s. 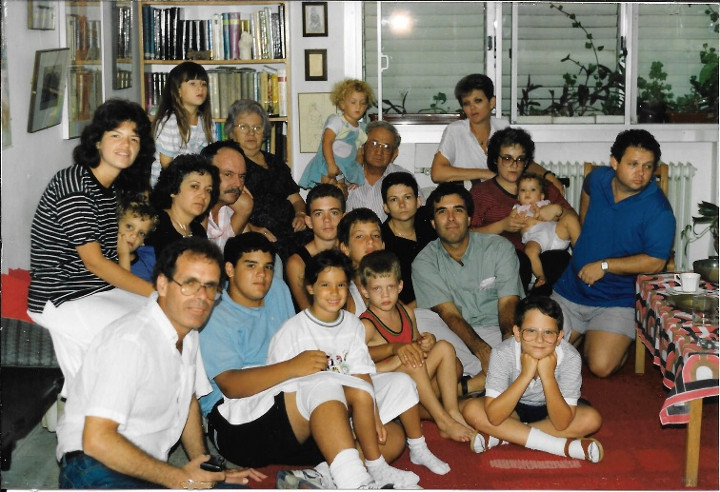 Our families together on a trip to Israel in 1990

How fortunate we are to have a family where our historical emotional bonds and shared history are what matter most to us. Respect for the other, unconditional love and the absence of politics and religious judgement has always been our unspoken rule. Love of the Jewish people and the Land of Israel will always be our common ground. If ‘Ahavat Yisrael’ is defined as love for your fellow Jew, then even more so does this apply in one’s extended family.

As relatively recent immigrants to Israel I know it is our grandchildren who will truly be the Israelis. I know that our extended family of cousins living here are always ready to help us and serve as an amazing example to our family of accomplishment in so many fields including education, medicine, agriculture, business, government, finance and the arts. 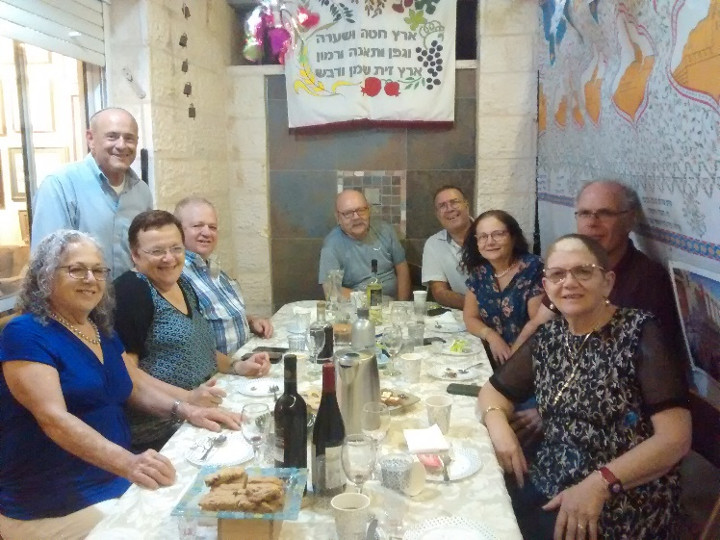 My cousins visit our succah in Modiin – September 2018

This brought to mind a quote from the Lubavitcher Rebbe that I recently saw:

“Each person is born with a path particular to his or her soul, generally according to the culture into which he or she was born…we are not meant to all be the same. Our differences are as valuable to our Creator as our similarities.”

This well-known paraphrase attributed to the Rebbe says it more succinctly: “Labels are for shirts, not for Jews!”

Howie Mischel is a retired public finance analyst from New York who made Aliyah in 2009. In Israel he has worked as an aliyah advisor at Nefesh B’Nefesh and with several start-up companies. He lives with his wife Terry in Modiin, has four married children and is the proud grandfather of eighteen.

Broken: My Encounter at the Western Wall

Victims and Terrorists under the Same Roof