Kreplach Isn’t Something to Fight About 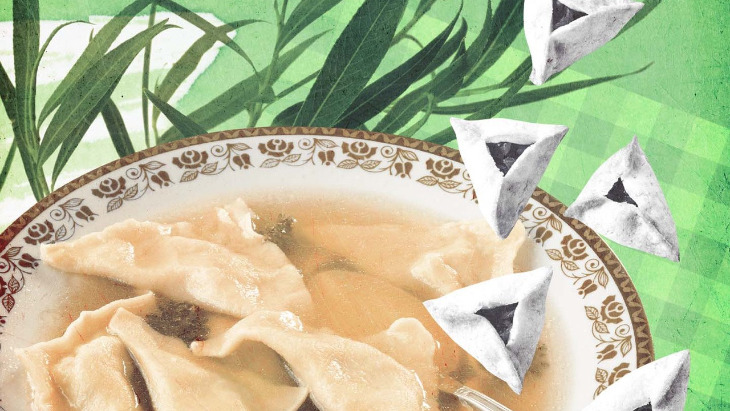 Explaining hidden holidays and their Ashkenazi-centric association with kreplach.

It seems like everything is controversial these days. Even kreplach.

Kreplach, for those not in the know, is basically Jewish ravioli, or what the hip, Jewish cookbook types call, “a triangular-shaped noodle dumpling stuffed with a meat filling.”

Kreplach’s origins – I’m guessing here – were probably an ingenious way to make use of leftover brisket, because that’s the most common stuffing, and they’re usually, but not always, served in chicken soup. My grandmother – she hated making them, and she had a colorful way of expressing her frustration – fried them in a pan.

Many Jews with Eastern European roots eat kreplach three times a year: in preparation for the Yom Kippur fast, on Hoshana Raba, which is the last day of the weeklong festival of Sukkot, and Purim. Kreplach is a dumpling, which means the meat is “hidden” inside the noodle, and that is an allusion to each of these days, which are sometimes referred to as “hidden holidays.”

At least, that’s the reason we gave in our lighthearted, pre-Yom Kippur post extolling the virtues of kreplach. But like I said above, some people took issue with that.

If you knew why people fast on [Yom] Kippur, you wouldn’t call it a “hidden holiday.” This is the second post I see on this page that provides misleading information about Jewish people and religion. And kreplach has nothing to do with [Yom] Kippur, it’s regular food. It’ll be the same if I say Pizza is a festive delight revolving around Halloween, and each topping represents your costumes. Come on, please stop.

Eating kreplach on Erev Yom Kippur (the day before Yom Kippur), Hoshana Raba, and Purim may be an Ashko-centric way to observe these days, but that doesn’t negate the universality – or as our questioner seems to imply, the concept – of hidden holidays. Hidden holidays are a thing.

Hidden holidays also involve banging, or as Yiddish speakers like to say – and again, while invoking kreplach – “The three times you klop, you eat kreplach.” Klop is Yiddish for “bang.”

The first of these hidden holidays, like I mentioned above, is Erev Yom Kippur. The Torah makes a subtle reference to its significance – although you might miss it if you’re not familiar with the principles of Talmudic exegesis1 – and before eating the final meal preceding the fast (with kreplach, of course), many people first recite a portion from the Yom Kippur service, which involves banging lightly on your chest.

Hoshana Raba is next. The day’s significance is not mentioned in the Torah itself, which is why it’s considered “hidden,” but its importance is discussed at length in the mystical sources. The prayer service is extended, and involves circling the synagogue seven times. After about an hour of walking and prayer, you grab five willow branches and bang them on the floor. Later in the day, you eat the last official meal of the Sukkot festival (last year, I had kreplach with a glass of wine).

The final hidden holiday is Purim. Purim itself isn’t hidden, many people know about it, but hiddenness is the point of the day. Purim celebrates the concept of providence, or how salvation seems to come in less obvious, or non-miraculous ways. Part of the Purim observance includes listening to a public reading of the Book of Esther – it tells the Purim story – and banging on something (and yelling “Boo!”) every time Haman, the story’s antagonist, is mentioned. Some of the symbolic foods associated with Purim include hamantaschen, and, obviously, kreplach.

So no, we didn’t invent hidden holidays, and no, we also didn’t make up their connection with kreplach. Kreplach is an Eastern European food, so not every Jew eats it, but it’s in sync with the symbolic, hidden nature of the days, and most importantly, it’s delicious.

Plus, as another Yiddish speaker once told me in reference to kreplach and hidden holidays, “If you eat kreplach three times a year until you’re 120, you’ll merit to live a long life.”

Anti-Semitism on University of California’s Campuses