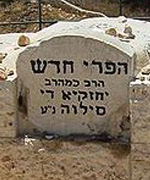 Yahrtzeit of Rabbi Chizkiyah Da Silva, commonly known as the Pri Chadash, the name of the commentary he authored on the Code of Jewish Law. He was born in Italy and at age 20 traveled to Jerusalem to further his studies. He died in 1698 at the age of 39, and is buried on the Mount of Olives in Jerusalem. Till today, "Pri Chadash" is printed in the standard edition of the Code of Jewish Law and is widely studied by rabbinic scholars.