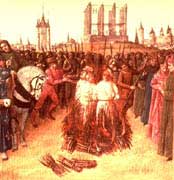 In 1348, amidst the devastating Black Plague which would eventually kill 25 million Europeans, a government official in Switzerland announced that Jews (under torture) had confessed to the poisoning of wells in the Rhine Valley, as part of an international Jewish conspiracy. The report was readily accepted by nobles who resented the Jews as economic competitors and to whom they were indebted for loans. Thus began a "year of terror" which saw the destruction of most of the Jewish communities in the region, and thousands of Jews burned alive.