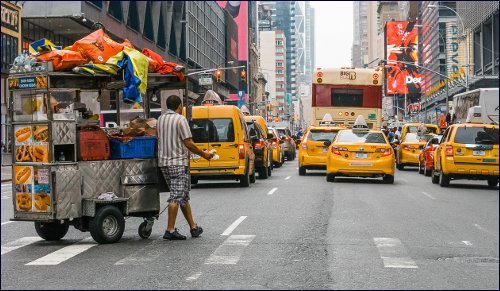 New York can be a cold and lonely place, but that day two strangers warmed our souls.

My husband and I went to the orchid show at the New York Botanical Gardens last week. When we got off the subway in the Bronx, we had no idea how to get to the Conservatory. We asked directions of a young man who ran a candy and magazine kiosk near the station exit. We were blown away by what occurred next.

He locked his kiosk and came out to show us directions on the nearby map. When he noticed that our eyes were still glazed over, he walked outside with us and showed us which way to go. It may not seem like such a big deal, but to us it was a real kindness, a small act from a stranger that made the world feel a little less lonely, a human being who went out of his way to help another. It wasn't life-saving but it touched our souls.

Following his (correct and easy) advice, we soon found our way across the street from the park. As we waited for the light to turn green, some of the NYBG staff was waiting also. We asked them which was the best entrance for the show (you see that my husband is missing the male gene responsible for the refusal to ask directions!). After ascertaining that we had already purchased our tickets, one of the men volunteered, "I'll do you a favor. I'll open this locked gate in front of us so you won't have to take the long way around."

New York can be a cold and lonely place. But on that day it warmed our souls. It reminded us of the humanity that resides in all of us. It gave us the energy and strength to cope with the rest of the day's challenges. It may be trite but it really did renew our faith in humanity.

When we participate in small acts of kindness, we may not fully appreciate the impact we are having. We may dismiss them as insignificant or meaningless. But experiencing it from the other side, I see that's not true at all. Each act of giving, no matter its seemingly trivial nature, has the potential to make a big impact. You never know who or what is going to lift your day. I remain grateful to two strangers who took a dark, gloomy day and made it that much brighter.

My Dreaded Trip to the DMV

Starting the New Year Right
It Takes A Lot Of Faith To Be An Atheist
How Instagram Brought Back This Nostalgic Soup
What Makes Eli Run?
Comments
MOST POPULAR IN Family
Our privacy policy