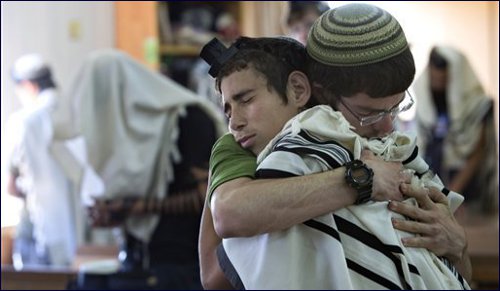 Families of abducted Israeli teens refuse to succumb to despair.

As the days pass following the abduction of three Jewish teenagers near Hebron, the boys’ families are refusing to succumb to despair despite the uncertainty surrounding the situation.

Hamas terrorists kidnapped Gilad Shaar (16), Eyal Yifrach (19), and Naftali Frenkel (16) Thursday night while they were hitchhiking home from school, Israel has said. A massive manhunt has been underway since Friday to rescue the teens.

“I know that our children are on their way home,” Iris Yifrach, Eyal’s mother, said Sunday. “I feel it. I am very serene because God is watching over our children.” 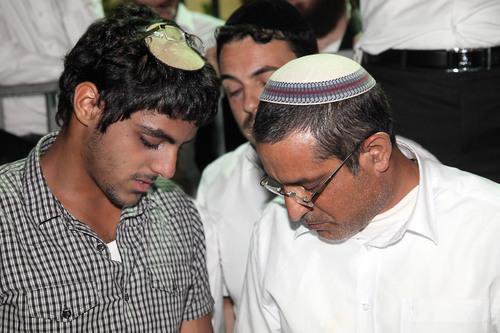 Hosting a religious gathering in her hometown of Elad, she said, “I look at this test that God has set before me, and I pray that He will rescue my son Eyal and Gilad and Naftali. This is a big test for all of us.”

The Shaer and Frenkel families thanked the people of Israel for the waves of support they have received.

“We are going through a difficult time in these last few days and I want to hug the people of Israel with a big embrace, an embrace of gratitude. An embrace of prayer,” said Bat-Galim Shaar, Gilad’s mother. “Gilad is strong, and I am sure that Naftali and Eyal are strong too. I want to ask the people of Israel to continue praying and being together. Continue giving that strength to our children, and with the help of God, with the power of this togetherness we will succeed.”

Earlier Sunday, Naftali Frenkel’s mother, Rachel, spoke to reporters, saying, “We are enveloped by a very warm circle of wonderful family and community. We know and feel that every effort is being made to bring the children home. We are grateful to every soldier in the field, every Shin Bet operative, the members of Knesset, the mothers and fathers of the soldiers in the battlefield, all the media personnel who are here, in the hot sun, to bring our story to the world. Thank you. Thank you very much.”

She added that her family is “well aware that the heavens are being torn open with prayer for our children, and we ask that you continue to pray. We are optimistic.”

Directly addressing her absent son, she said, “Naftali, your father and mother and siblings love you to no end. The nation of Israel is turning the world upside down in order to bring you home.” 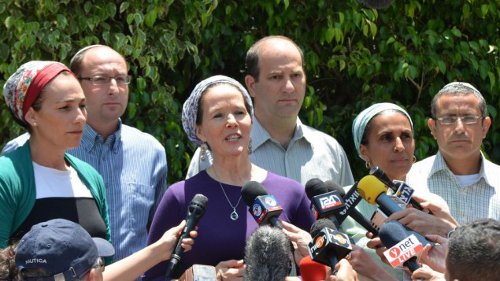 Israeli Knesset members and ministers flocked to the families’ homes on Sunday to offer their support. As he was leaving the Frenkel home on Sunday, Interior Minister Gideon Sa’ar said, “I came to support the family. What I am feeling is what everyone in Israel is feeling. The security forces are doing everything possible, and there is no better force anywhere in the world.”

Education Minister Shay Piron also visited the house, saying that “abducting 11th graders is morally the lowest terror organizations can go. I say this explicitly: This will not be worth it for anyone involved.”

Prime Minister Benjamin Netanyahu’s wife, Sara, also visited the homes of the families on Sunday, telling the parents that she was deeply moved by the strength of their spirit.

“On behalf of myself, my husband, and the entire people of Israel, I want to give you strength and offer you my embrace,” she said. “We are all praying for the rapid and safe return of the three precious boys.”

Meanwhile, social services provided assistance to the immediate and extended families of the abducted teens.

“We arrive during the most intimate and difficult moments, offer our help, and leave the decision up to the family. In emergency situations like terror attacks we usually wait,” social worker Ariela Segal said.

Social workers visited the boys’ schools to help explain the situation to their classmates, said Segal.

Warsaw Ghetto Furniture
What Happened to the Truth?
The Japanese Everything Bagel Spice Recipe
How To Stock A Jewish Pantry Wherever You Live
Comments
MOST POPULAR IN Israel
Our privacy policy