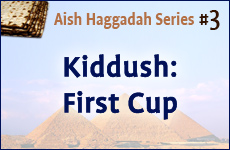 Why is this one of the 15 steps to freedom?

Kiddush and a Meaningful Life

To begin the Seder, we make Kiddush and sanctify the day. The word "kiddush" means special and . The first step to personal freedom is to recognize that you are special. You have a distinct combination of talents, skills and experiences that qualifies you to make a contribution to the world.

In Egypt, the Jews were forced to build the store-cities of Pitom and Ramses. Why was this tortuous labor? Because these cities rested on swampland, and every time the Jews built one level, it sunk into the ground. Slavery is a life with no accomplishment, no achievement, and no meaning.

On Passover, we begin our journey toward personal freedom by asking: What is humanity's biggest need? What can I contribute most profoundly to nurture and protect the world? And... what am I going to do about it?

The enslavement of the Jewish people did not happen overnight. The Egyptians orchestrated a deliberate progression of events that lead from our being a highly respected minority, to being vilified outsiders and ultimately a subhuman slave caste.

Likewise, the redemption from bondage did not take place in one sudden flash. When the Torah describes the transition from slavery to freedom, it uses four different words to indicate four stages of transformation. These four "expressions of redemption" are:

The four cups of wine correspond to these "four expressions of redemption."

The effect of wine is that it lifts our spirits and helps us feel good. In Judaism, life and pleasure are synonymous. And, though the trials of life may obscure the pleasure of life's blessings – still life is a pleasure. Wine in Jewish life is never used to drown out pain, but rather to assist one in reconnecting to the feeling that life is pleasurable.

On Passover, the drinking of wine lifts us in two ways.

(1) The redemption from Egypt took place a long time ago. Sometimes it is difficult to feel connected to these events and to the pleasure of being a part of the Jewish nation. Wine helps.

(2) Though the attainment of freedom may be cause for dancing in the streets, it also carries with it the burden of responsibility. This looming weight of accountability – the nuts and bolts of sovereignty – is enough to temper any celebration.

So we drink a little wine – to lift us, and to remind us that long after the headlines have faded, the deepest pleasure of freedom still remains. The pleasure of assuming the reins of responsibility. Of rolling up our sleeves and beginning to tackle the thankless tasks necessary to transform promise into substance and dreams into reality.

At the Seder, every Jew should drink four cups of wine corresponding to the four expressions of freedom mentioned in the Torah (Exodus 6: 6-7).

Since we are free people this evening, nobody should pour their own wine, but rather each person should pour for another – as if we are royalty who have servants.

It is best to use red wine, since this alludes to the blood spilled by Pharaoh, the blood as part of the Ten Plagues, and the blood the Jews put on their doorposts.

Someone who has difficulty drinking wine may use grape juice, but should add a little wine so that the taste of alcohol is detectable.

It is preferable to drink the entire cup of wine for each of the Four Cups. Otherwise, you should at least drink a majority of the cup.

Jewish law defines an act of "drinking" as two swallows without pausing. This is the preferable way to consume the Four Cups. Otherwise, you should at least consume the wine within four minutes.

As an expression of freedom, the Sages enacted leaning to the side while drinking the Four Cups of wine. Everyone should lean to the left and back!

Kiddush should be recited while seated. You should have in mind to fulfill two mitzvot:

When saying the Shehechianu blessing, you should have in mind that it applies to all the various mitzvot of Seder night.

When the Seder falls on Saturday night, you should also make the Havdallah blessings as listed in the text, using the Yom Tov candles as your Havdallah candle.

The Reason We Recline

Reclining at the Seder is an outward display of freedom. Royalty would often have special lounges upon which they would recline while eating their meals. On the night of the Seder we project the feeling that a Jewish life is a royal life.

Jewish law makes a point of saying that even a pauper is obligated to recline at the Seder. Oftentimes people equate wealth with freedom, the assumption being that "the wealthier I become, the freer I will be."

To this, the pauper's reclining at the Seder retorts, it's not how much you have that determines your freedom, but what you do with what you have. No matter how numerous or how meager your possessions, when used to help others and to promote meaningful endeavors, then they are instruments of freedom. Conversely, when wealth becomes a means to amass a vast collection of self-indulgent toys, then each new acquisition becomes another set of designer handcuffs.

Seder Plate - 15 Steps
G-d Time
Shavuot is The Holiday of Cheesecake and Blintzes
What Does Kosher Mean Literally?
Comments
MOST POPULAR IN The Haggadah
Our privacy policy