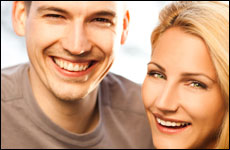 How to retain that first spark of excitement in marriage.

From the moment they say "I do," newlyweds have two years to enjoy the special bliss that new love brings. This new finding, reported by the New York Times last month, is based on a study undertaken by American and European researchers who tracked 1,761 people who got married and stayed married over 15 years. After the two years, the couples moved into a more companionable state in their relationships.

The study also reported that the research, completed in 2009 has been confirmed by recent studies as well. Although the excitement of the new love receded after the two years, the study found that most of the couples found themselves drifting into a more companionable relationship, connected in their lives. In addition, some of the couples did report a version of that earlier excitement and happiness while others simply had a more mundane life experience together.

What was the difference then between the group which had a satisfying companionship and the more intensely passionate couples?

The more joyful couples kept things interesting, with surprises and thoughtfulness complimenting the attempts to keep things new. Because, as the Times points out, we are "wired to keep things new," we crave difference and newness. Many couples are satisfied with the companionable and easygoing state of a marriage after two years. However some couples felt it signaled something wrong. It is helpful to couples to understand that while the initial excitement of fresh love recedes into something else, they can retain elements of that first excitement.

What are a few things that interject the novelty which can spark early romantic feelings?

1. Experiences. Sign up for a class or attend a lecture or performance that is out of your typical zone. Couples who tried "exciting" new things felt a commensurate level of excitement.

2. Travel. Seeing new things and being in new places fires up the areas of the brain associated with pleasure and novelty. Planning a trip can be exciting and fun too. If time and money are tight, reconsider making that trip with some creative spending. Following the unexpected death of a close friend, and the heart attack of someone their age (early forties), one couple I know decided to stop putting off their dream trip to Europe for some future date which may not arrive. They planned for the following year. To deal with the economics, they used miles, vacation time and booked off season. The trip and its planning gave their marriage a terrific boost. If a big trip together is just not possible, try taking one day off and going someplace new together or visit a tourist site near home.

3. Little surprises and thoughtfulness. Bring home her favorite candy or perfume. Arrange surprise tickets to a ball game for him. Invite your spouse to something he/she has wanted to do. The research found couples who did exciting things together reported greater satisfaction. And those who experienced surprises had greater happiness (measured by brain activity). The surprise didn't have to be something big.

4. Turn down the noise. Our daily life and relationships suffer when too many things distract us. Texting and emailing for work are a part of everyday living. Some couples turn off the phone at the restaurant and really connect for that time. The noise is not just electronic however. Other things like demanding in-laws, friends who create drama and obligations that don't give us time for relationships add to the tedium. Try to minimize these obligations. Imagine if your life didn't include them. Would you have more fun with your significant other?

5. Pay attention to the little things. Do the thing your partner has been trying to get around to finishing. Wish each other a good day/night. Express appreciation daily. Create things to look forward to.

These studies are good news. They show tremendous benefits for relatively small investments of time, money and kindness. And what better to invest in than our relationships?

To receive discounts on Gary's Creating Your Best Marriage 11 DVD set program, go to NeumanMethod.com and use coupon code Aish.

5 Ways You May Be Hurting Your Spouse Without Realizing It

Red Flags in Marriage and What to Do about Them