Judaism & the Power of Names 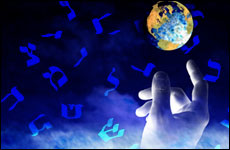 Your name is the key to your soul.

It’s official: The name Sandy has been retired as a suitable name for tropical storms due to the horrific damage and the 72 deaths she caused on the East Coast.

Storm names are recycled every six years or so, unless they cause catastrophic harm. In that case, we just don’t want to take a chance on a repeat performance by another storm bearing the identical name.

A more serious question we ought to consider is whether names really have a deeper meaning - and whether our own names have any great significance. The answer from a Jewish perspective may surprise you.

Names represent our identity not simply because they are a convenient way to allow us to be distinguished one from another. It is because they define us. The names we are given at birth aren’t accidental. They are to some extent prophetic. They capture our essence. They are the keys to our soul.

The Hebrew word for soul is neshamah. Central to that word, the middle two letters, shin and mem, make the word shem, Hebrew for ‘name.’ Your name is the key to your soul.

The Midrash teaches us that although prophecy no longer exists after the close of the Bible, there is one small area in which we are still granted a glimpse of Divine wisdom. It comes to us when we struggle to find the right name for our offspring.

The names of our children are the result of a partnership between our effort and God’s response.

The names of our children are the result of a partnership between our effort and God’s response. That is why the Hebrew word for ‘name,’ shem, has the same numerical value as the word for ‘book,’ sefer: 340.

Names are a book. They tell a story. The story of our spiritual potential as well as our life’s mission. That explains the fascinating midrash that tells us when we complete our years on this earth and face heavenly judgment, one of the most powerful questions we will be asked at the outset is, What is your name – and did you live up to it?

Who was the first one ever to call something or someone by name? The Torah makes clear it was none other than God. And God used names not for the sake of identification, but rather for creation.

When the Torah says, “God created,” it doesn’t suggest that He worked with what He fashioned by labor, but merely that He spoke – and the very words describing the object came into being. God said, “Let there be light and there was light.” The Almighty merely gave it a name, and the very letters defined its atomic structure.

Names are not just convenient ways for us to differentiate between objects. Names are responsible for the differences between all things on this earth.

Names came before the existence of those things with which they would subsequently be identified. Names are not the offspring, but rather the parents of everything in the universe. Things really are what they are called. Or to put it more bluntly, they are what they are because of what they are named, in spite of Shakespeare’s belief that “A rose by any other name would smell just as sweet.”

Indeed, the Bible remarkably tells us “As his name, so is he” (Samuel I, 25:25). Talmudic sages offer countless examples of the connection between the names of biblical characters and their actions.

We will forever leave behind our names as a final legacy.

Does that mean that we are predestined to live lives circumscribed by something beyond our control? Are we doomed to play out roles handed to us by our parents while we were infants? Is our free will limited by our names? Of course not. Judaism emphasizes the principle of freedom of choice. Yet our names are indicators of our potential and predictors of our possible futures.

It is not our names that force us to be what we are. It is what we are that transmits itself in a profoundly prophetic manner to those entrusted with the holy task of choosing our names. It is a message from God entrusted to our name-givers in order to help us define our mission on earth.

So while we are far from being like Hurricane Sandy, we need to recognize that we will forever leave behind our names as a final legacy. Our names outlive us; let’s do everything in our power to make them be remembered for blessing.