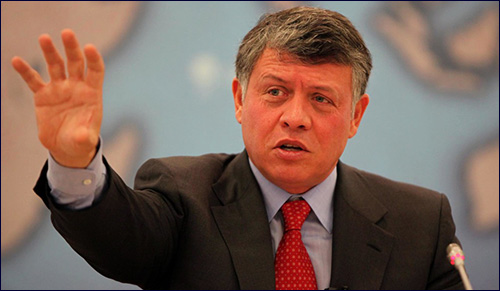 No people threatened by an aggressor and fighting for their existence has been vilified for using their full forces to prevail, except Israel.

The Internet is all a-Twitter about Jordan’s King Abdulla. Almost overnight the King has become an international hero. As one Google headline put it, “The Internet has fallen in love with the warrior King.”

Seems that the world agrees with the way Abdulla responded to the horrific murder of a Jordanian pilot. In a grisly execution videotaped by barbaric ISIS leaders, Lt. Moaz al-Kasasbeh, was placed in a cage, doused with a flammable liquid and set afire to a slow and agonizing death. The King was in America at the time meeting with President Obama when he learned of the gruesome execution. Immediately thereafter he told U.S. lawmakers in a closed door meeting that he would pursue the group responsible until Jordan’s military runs "out of fuel and bullets.”

"He said there is going to be retribution like ISIS hasn’t seen,” Rep. Duncan Hunter Jr., R-Calif., told reporters after the private meeting. “He mentioned Unforgiven and he mentioned Clint Eastwood, and he actually quoted a part of the movie.” He vowed that there would be a terrifying response of earth-shaking proportions.

And then the king actually went ahead and did what he promised to do.

The first act of the Jordanians was to hang two terrorists in their custody for whose release ISIS had been bargaining. Then they went on attack. Beginning an air campaign, in the very first days they flew over 5500 sorties and destroyed 56 Islamic state targets. According to air force chief, Gen. Mansour al-Jabour, about 7,000 Islamic State fighters have been killed since the beginning of the coalition airstrikes – with the promise of many more to come.

And as in any war, it was not only militants who died. Just a few days ago we learned that an American female prisoner, Kayla Mueller, held hostage by ISIS, may have been killed by these Jordanian airstrikes.

Yet somehow the world understood and even applauded this reaction to evil. Crime and punishment are inextricably linked, and sometimes, tragically, there is collateral damage.

Strange, however, was the fact that two words so popular this past summer were never once heard, not from protesting masses, not from the media, and not from the United Nations. There was no clamor claiming “disproportionate response.”

When three innocent teenagers in Israel were brutally murdered followed by rockets falling on civilians throughout the country, Israel’s efforts to protect itself from the onslaughts of Hamas never ceased to be condemned with the mantra “disproportionate response.” The media counted bodies daily and if more people died among those committed to annihilating Israel than their intended victims, they claimed that it was the aggressors who were unfairly targeted – and the “disproportionate” cry was heard throughout the streets of Europe.

Warning residents before replying to fired missiles wasn’t enough, the world kept saying. You’ve got to keep count. Even if your enemies come at you from the openings of unexpected tunnels, even if they approach with suicide vests, slaughter innocent children, commit unspeakable crimes, no response must ever be “disproportionate”. “Disproportionate response” was marked the sin of all sins and remains the reason why Israel to this day is unbelievably targeted as guilty of having perpetrated war crimes.

What becomes ever more clear though is that this is a transgression reserved only for the Jewish people.

One Jordanian pilot. 7000 killed in response so far. Yet no one has raised the objection which dominated the world’s reporting of the Israel–Hamas conflict this past summer.

Jordan disregarded the idea of a proportionate response. This in spite of the fact that it faced no immediate threat from ISIS forces, as Israel did from Hamas last summer. And the world understands because that is what every country would do in a similar situation.

It seems only Israel is guilty when it chooses survival over capitulation and death.

In a feature story on Jordan’s response, Time magazine compares it to American policy. Major Brandon D. Newton wrote about vengeance in a paper for the Army’s School of Advanced Military Studies. In Punishment, Revenge, and Retribution: A Historical Analysis of Punitive Operations, he noted that violent retaliation may be required to deal with groups like ISIS. “Primitive, loosely structured actors or organizations may only respond to actual force,” he said, “not the threat or potential use of force.” The guiding concept is nothing less than an echo of the ancient Talmudic principle that “he who comes to kill you, rise up early to slay him first.”

In the history of warfare, no people threatened by an aggressor and fighting for their very existence have ever been vilified for utilizing their full forces to prevail – with one exception. It seems only Israel is guilty when it chooses survival over capitulation and death.

Perhaps now is a perfect time to remind the world that what is good for Jordan is just as good for the Jews – and it is the height of hypocrisy to applaud the action of one while condemning the very same response of another.

The Reality of Paradise Now