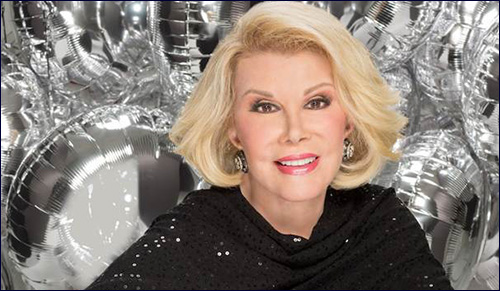 You don’t normally think of a woman whose heart stopped at age 81 as being “cut down” in her prime. Yet, when the unthinkable happened to Joan Rivers during recent routine throat surgery that lead to her death on September 4th, many of us did.

Whether you’ve been fan or foe of the controversial, sharp-tongued Jewish comedienne, Joan, perhaps the most famous female comic in the world, gave us a precious gift. She lived life full-out, unbounded by age. She believed in herself. She believed in life and endurance that runs not only on talent, but on sheer chutzpah!

I succeeded by saying what everyone else is thinking. – Joan Rivers

Yes, these are the traits of a Jewish maidel and the Jewish people. That’s why her death feels, well, personal and almost premature. To many of us, she seemed indomitable, hip, relentless.

Known for her “take no prisoners” wit, she also directed her barbs at herself whether the topic was age, wealth, her well-publicized plastic surgeries (“I wish I had a twin, so I could know what I'd look like without plastic surgery”) or pretention.

I succeeded by saying what everyone else is thinking. – Joan Rivers

The Brooklyn-born Rivers, a daughter of Russian Jewish immigrants started life as Joan Alexandra Molinsky on June 8, 1933. Not so ironically, despite the fact that her father was a doctor, money, or lack of it, was a huge theme in her home as she was growing up. Squabbles over money shadowed her, adding fuel to her determination to smash comedic glass ceilings. She shattered them. Joan, virtually the lone female doing stand-up at the time, was– an original and a pioneer --leading the way for female stand-ups to roar onto stages in the Borscht Belt, clubs, on TV, and in film.

People say that money is not the key to happiness, but I always figured if you have enough money, you can have a key made. – Joan Rivers

Joan, a superior scholar, graduating Phi Beta Kappa with degrees in English literature and anthropology from Barnard College in 1954, might have followed the “fifties” nice Sadie Married Lady route, but when she said: “Can we talk?” her life changed. After an ill-fated short first marriage, Joan told an audience that her mother "is so desperate to get me married that if a murderer called, she'd say, 'So, he has a temper.'" She wanted and needed to “talk” to all, standing in the spotlight, rather than in the wings. She once said: “My routines come out of total unhappiness. My audiences are my group therapy.”

Joan, as a recent grad to pay the bills, was a tour guide, fashion consultant, and aspiring thespian, working with the young Barbara Streisand. Discovered while doing stand-up, she started appearing on TV cracking up audiences on The Tonight Show, Candid Camera, and The Ed Sullivan Show, among others. But more, taking a leaf from Lenny Bruce “she told it like it was” – or how she saw it, out loud, unabashed and often shocking.

Throughout her career she also wrote books (her latest is Diary of a Mad Diva), films (The Muppets Take Manhattan), created and starred in TV shows, and was a Queen at QVC, selling her own brand of everything from jewelry to cosmetics. She also became a fashion queen where her celebrity interviews on red carpets often started with “Who are you wearing?” On one of her hit shows, Fashion Police Joan would reign free with sartorial judgments. But not everyone was thrilled being in her hot seat. Nothing and no one was off-limits. She’d never apologize for telling her truth – except to the loves of her life, daughter Melissa, with whom she worked both behind in and front of the cameras, and her beloved grandson Cooper, who appeared regularly on their show Joan and Melissa.

Her endurance was tested many times. There was the highly publicized fight with Johnny Carson that kicked off when he heard she was hosting a rival talk show on Fox. The show she and longtime second husband Edgar Rosenberg had created bombed, which lead to a second tragedy when Edgar committed suicide three months later in 1987.

Devastated, Joan took time to heal, then she came back, determined to re-build and re-invent herself, perhaps as a way of managing the horror that no doubt plagued her for the rest of her life.

She was also an active philanthropist working with the Cystic Fibrosis Foundation, Guide Dogs for the Blind, and God’s Love We Deliver, giving her $250,000 prize she won The Apprentice, (2009) to the last charity which provides meals to shut-ins.

Joan was the quintessential stereotypical Jewish New Yawka. More than her shtick it was in the telling, the attitude. When it came to Israel, she used that attitude to come to the Jewish state’s defense.

Just two months ago, when asked by a reporter about the Israeli-Palestinian conflict she let her opinions fling and fly, razor-sharp. Here is an excerpt:

“Let me just tell you, if New Jersey was firing rockets into New York, we would wipe them out. … And Palestinians, you cannot throw rockets and expect people not to defend themselves!

When the reporter asked about the civilians, she came back with: “Then don’t put your things in private homes! Don’t you dare put weapon stashes in private homes!” He followed up, asking where the civilians were supposed to go. “I don’t care,” said Joan vehemently. “They started it. You’re all insane! They started it! How do I know? ‘Cause I have been over there. That’s how I know. And I wish the world would know!”

Joan Rivers: comic, writer, creator, tycoon, pioneer – and Jewish mom and grandma made “Can we talk?” a signature.

I enjoy life when things are happening. I don't care if it's good things or bad things. That means you're alive. – Joan Rivers