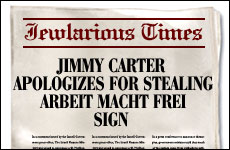 Former President calls theft “the single biggest mistake of my career, outside of running for a second term.”

JEWLARIOUS SATIRE – Calling it “the single biggest mistake of my career, outside of running for a second term” Jimmy Carter apologized to the Polish, Jewish and American people this past Sunday. Carter was caught red-handed at a Warsaw Dunkin Donuts, quietly sipping a latte and sitting with the arbeit macht frei sign, which had otherwise hung at the Auschwitz concentration camp, since its inception.

A chastened Carter defended his actions and relationship with the Jewish people, telling the Jewlarious News Network (JNN), “Calling Israel an apartheid state, cuddling with Hamas leaders and stealing the arbeit macht frei sign do not make me an anti-Semite. I love the people of the book, but just wish that there were fewer of them and that they had less land so that we could fully monitor and appreciate them, never taking them for granted again.”

“I love the people of the book, but just wish that there were fewer of them.”

When pressed by JNN as to why he was at the site and how he managed to steal the sign without anyone seeing, Carter explained: “It was a lark. Rosalyn and I build those habitats houses so we are pretty handy with tools these days. I just got onto her shoulders – Rosalyn is as strong as an ox – and we took out a ratchet set and removed the screws. Then, she just carried me away.”

A tearful Rosalyn Carter told JNN confidentially, “Jimmy has gained 20 pounds in the last three years. It was awful.”

Friends and foes struggled to understand what Carter wanted to do with the sign. Long time Carter critic Allan Dershowitz told Jewlarious, “Jimmy is straight up crazy. Can I just leave it at that?”

President Obama immediately distanced himself from Carter saying, “We all know that they give these Nobel Peace Prizes out to anyone, even the least accomplished people. Jimmy got one. I got one. On the upside, he is making me feel more deserving.”