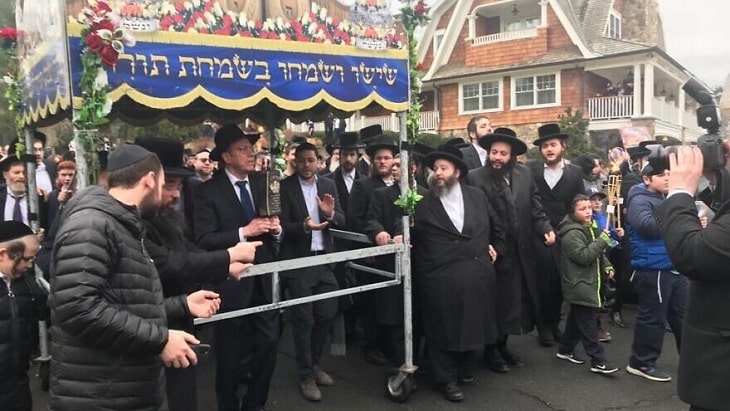 Less than 24 hours after the attack, Jews sang and danced, celebrating the dedication of a new Torah scroll.

Less than 24 hours after five people were stabbed at a rabbi’s home on Forshay Road in Monsey, N.Y., Jews gathered on the lawn to sing and dance as a Torah scroll was dedicated at a nearby synagogue, making for a far different scene from the night beforehand.

On Saturday night, Grafton Thomas, 38, entered the home of Rabbi Chaim Rottenberg and began stabbing people who had come to celebrate the seventh night of Hanukkah. Using what has now been described as a machete, the attacker began slashing at people in the home, though several people reportedly threw objects at him, eventually prompting him to flee.

He then turned his attention to Rottenberg’s synagogue, located on an adjacent lot. Finding the building locked, the attacker returned to his car and fled the scene. He was apprehended several hours later by members of the New York Police Department.

While a motive for the attack has not been released, on Sunday New York Gov. Andrew Cuomo called the rampage an “act of domestic terrorism” after meeting with Rottenberg. Cuomo said he planned to introduce legislation that would increase the penalty of such cases to reflect the seriousness of the crime. 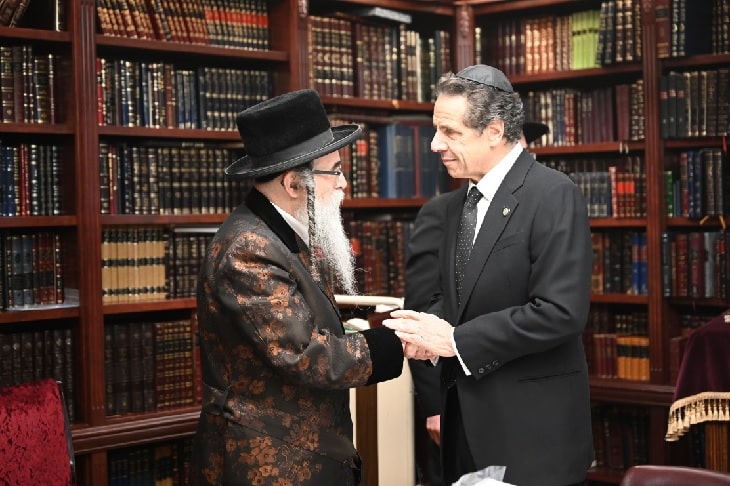 New York Gov. Andrew Cuomo meets with of Rabbi Chaim Rottenberg in Monsey, N.Y. after an attack in his home.

A statement released by Thomas’s lawyer, Michael Sussman, said he had suffered from a “long history of mental illness and hospitalizations,” and had “no known history of anti-Semitism.” Thomas pleaded not guilty to five counts of attempted murder and one count of burglary at his arraignment on Sunday. Bail was set at $5 million.

“We need more police presence. We need to feel more secure, and we don’t feel that now.”

Nevertheless, in the federal hate-crime criminal complaint on Thomas—an African-American who grew up in the Crown Heights neighborhood of Brooklyn, N.Y., and now lives with his mother in Greenwood Lake, N.Y., about 20 miles from Monsey—said that law-enforcement agents recovered journals from his mother that included anti-Semitic references, as well as Internet searches on Adolf Hitler and where to find local Jewish synagogues.

Eli Cohen, a lifelong resident of Monsey who grew up going to the Rottenberg shul, said the attack has impacted the whole community. “We are all concerned. People are nervous,” he said, noting that kids can no longer walk to synagogue on their own because no one knows what will happen. “Monsey used to be a nice, calm, quiet place, and now, not so much.”

On any given Shabbat morning, some 200-plus people attend Shabbat services at the Rottenberg shul. Holiday programs, like the Hanukkah gathering the rabbi was holding at his home on Saturday night, can draw hundreds more people from the community.

Rivkie Feiner, a member of the Jewish Federation and Foundation of Rockland County’s Jewish Community Relations Council and a board member of the JCC Rockland, was spending Saturday evening with her children at a skating rink less than two miles from Rottenberg’s home when her phone began shrill with notifications about the attack.

As the assailant was on the run and no one knew where he was heading, Feiner began urging everyone standing outside of the indoor rink to come inside and wait.

“It was scary,” she recalled. “Then you started hearing the sirens, the ambulances, the helicopters flying above.”

“People don’t understand the ripple effect. It’s horrible. The entire community is connected through social media, and even our kids hear about it,” said Feiner, a communal leader who was at the scene for a while on Saturday night and met with government officials Sunday. “My 8-year-old came over and asked me what’s a stabbing, and my 11-year-old wouldn’t go to bed until we checked that all the doors were locked. He just wanted to know that the person was caught.”

According to Richard Priem, the Anti-Defamation League’s associate regional director for New York and New Jersey, the attack in Monsey was the 10th anti-Semitic attack recorded by the group since Dec. 23 in the region. Many of those attacks happened in the borough of Brooklyn, N.Y., and were directed at Chassidic Jews who are identifiable by their dress, which for men include long black coats, black hats and on Shabbat, wide fur hats known as streimels.

“The Jewish community is utterly terrified,” Evan Bernstein, the regional director of the Anti-Defamation League of New York and New Jersey, said in a statement. “No one should have to live like this.”

The attack also came less than three weeks after a deadly attack on a Jewish market in Jersey City, N.J., where two members of the Chassidic community were among three civilians and a police detective killed during an hours-long siege. The two attackers in that case—a man and a woman—were also killed.

According to Feiner, members of the Chassidic community in Rockland County and elsewhere have expressed how vulnerable they feel because the way they dress makes them identifiably Jewish. “We need more police presence,” she said. “We need to feel more secure, and we don’t feel that now.”

Priem said “It’s hard to pinpoint a specific cause as to why this is happening, but we do know that something meaningful needs to change. We need change from the top level—from the government down to the grassroots.”

In the hours after the attack, life began to return to normal—or at least a “new normal”—in Monsey. People continued to go to synagogues throughout town to pray and shoppers filled local stores, including the kosher supermarkets.

Even Rabbi Rottenberg continued with his plans. Just hours after the attack—his son was among those who had been stabbed—the rabbi addressed members of his congregation. He also recited the Jewish prayer of thanksgiving, which is said when a person survives a dangerous situation.

For Priem, who along with his colleagues had been on the scene for hours, seeing the Torah procession stop in front of the Rottenberg residence was a particularly powerful moment.

“This shows that despite the fear, they continue to adhere to their faith,” he said. “They won’t be cowed to change.”

Greek Rescuer Reunites with Jews She Saved During the Holocaust

Israel Struggles
Were Adam and Eve Jewish?
How I Learned to Love the Multiverse
10 Big Jewish Inventions
Comments