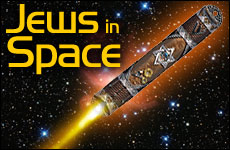 I Just flew in from the future of Judaism and boy are my arms tired.

If there are three topics I keep hearing most frequently throughout the Jewish community, they are:

Well, I can help you with number one. In the song, “Nature Boy,” written by Eden Ahbez and sung by Nat King Cole, it states:

Yes, it’s that simple. Why are you always trying to complicate things?

I can also help you with number three. The Bagel Brothers, on Beverly Boulevard, in Los Angeles. The onion bagel in particular. (And I’m not just saying that as a promotional plug so they’ll give me free bagels, because that would be wrong. No matter how much they insist upon it. Okay, maybe just this once.)

As for number two, the future of Judaism, if you’d asked me about that two weeks ago, I would have given the same response I give when asked what it is women want -- I haven’t a clue. But that was before discovering the Future of Judaism Time Machine Tours. That’s right – technology has advanced to the point where a company exists with the capability of propelling us into the future to experience the evolution of the religion, philosophy and way of life of the Jewish people. As Rabbi Simcha Avrohom Hakohen Sheps once said, “Way cool!” (I’m paraphrasing.)

Quite honestly, I’d planned on an Alaskan cruise, but this seemed more intriguing and really didn’t cost all that much more than the cruise. Plus, they left a flyer on my car for a 15% discount and a complimentary Future of Judaism mouse pad. Those who know me, know I’m a sucker for 15% discounts and Judaic mouse pads

I expected a futuristic-looking time machine, so was quite taken aback to find myself directed into a more traditional, giant, mezuzah-shaped transporter capsule developed at NASA’s Tempus Fugit Judaic Research Division. As was explained to me, the capsule does not move through space; just through time. So, half an hour later, when I opened the hatch, the capsule was at the same location in Los Angeles, but the year was 3010.

The first thing I noticed was that those Segway personal transporters had finally caught on. Everyone was on one of them. I asked to be directed to the Jewish community and was told that the entire city of Los Angeles was now Jewish. Incredulous, I asked, “Even the Hispanics?” And was told, “Especially the Hispanics.” Wow, what a difference a thousand years makes.

I arranged to meet the spiritual leader of Los Angeles’s Jewish community, Rabbi Jose Alvarez, at the Pico Kosher Deli, which I was delighted to discover was not only still in business, but had several of the same waitresses working there that I’d remembered. Apparently, the pastrami had some kind of preservative in it that sustained them over the years. The food, however, was now quite different – it was all in pill form, except for the standard free appetizers of pickles and bagel chips which they have yet to figure out how to make into pills.

Rabbi Alvarez, who’d converted during the Great Hispanic Conversion of 2087, explained that the pills were a result of the food having developed so many toxins that the only safe way to eat was to put the nutrients into pills, capsules and tablets. But not to worry, the Rabbi added, they were all kosher and organic.

Over the next hour, which is all I could afford from the tour company, the Rabbi opened my eyes to the substantial changes Judaism had undergone during the previous 1,000 years. It was mind-boggling and often revolved around speed, due to the ever-increasing short attention spans. For example, the average bar mitzvah ceremony lasted no longer than 15 minutes and involved lots of speed-reading, speed davening, and even speed kvelling.

Speed-dating itself was deemed too slow, so the average single person now meets dates by going to a drive-through shidduch. At the window, the couple is given no longer than 60 seconds to decide whether they want to see each other again. The second date lasts no longer than five minutes. If that goes well, they immediately marry, move in together and have children. That’s the third date.

Due to over-crowding, shuls are now underwater and offer, along with Torah study, scuba diving, Israeli folkdance/folkswim lessons and a seafood buffet. The cantor mixes Jewish themes with popular songs or oldies, such as “Tefillin,” sung to the tune of “Feelings.”

I asked about the Israeli-Palestinian conflict and was delighted to discover it had been resolved through a peace treaty brokered by descendants of Cat Stevens and Dustin Hoffman.

The rabbi went on to explain that the following changes have also occurred:

There was much more to explore about the future of Judaism, but my time was up. I thanked Rabbi Alvarez, got some of the delicious matzoh brei pills to go, and hopped back in the mezuzah-shaped transporter capsule for my journey back to present day. My head was spinning with all the changes that lay in store for us Jews in the future. Perhaps Albert Einstein said it best: “I never think of the future. It comes soon enough.” Or perhaps Yogi Berra did: “The future ain’t what it used to be.”

What am I Doing for Christmas?2 min read

If I Were a Rich Woman5 min read