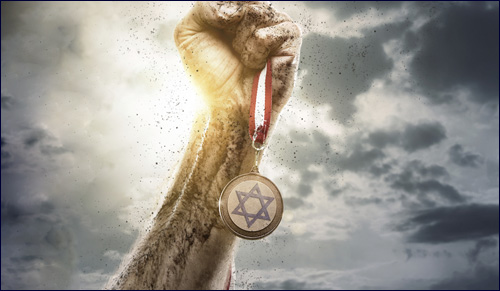 The significance of this year’s European Maccabi Games taking place in Berlin.

The symbolism is striking.

Eighty years ago, Berlin was the site of the Olympic Games. Hitler was the host and the games became victim of the Nazi drive to promote the superiority of the Aryan race by systematically eliminating Jewish athletes from German sports facilities and associations. At the last moment, outstanding Jewish sportsmen were excluded from the 1936 Olympics for fear that their victories would embarrass Nazi hosts and their claim of Jewish racial inferiority.

The 14th European Maccabi Games are now, for the first time, taking place in Germany. Last week some 2,000 participants from 20 countries, including Israel, marched in Berlin’s Olympic Park. The Langemarckhalle – built at the request of Adolf Hitler himself to glorify the regime he swore would last at least 1000 years and eradicate every vestige of the Jewish people – welcomed more than 2,500 Jewish competitors participating in the 10-day event.

Nazi Germany is no more. Jews have survived. But what is so profoundly ironic is how a ritual initiated at the 1936 Olympics resonates with a divine message of biblical origin - a message that was as prophetic to German leadership at the time as it remains to our contemporary world.

It was Hitler who at the 1936 Olympic Games started the tradition of the torch relay, the ceremonial carrying of the Olympic torch from Olympia, Greece to the site of the games. It is a tradition that continues to this day. Its symbolism is the flame that continues to burn, the link with the past, the fire which cannot be extinguished.

And for Jews it is a symbol with an ancient history.

All of us know the story. Moses was tending sheep in the desert of Sinai when he suddenly saw a bush that was engulfed in flames. Yet strangely enough, although the bush was burning, it was not consumed. That defied the laws of nature. Fire always destroys. At this very moment, as Moses stood transfixed by the miracle before his eyes, God revealed himself and proclaimed, “I am the God of your fathers.”

Superficially, the story seems simply to tell us that God performed this wondrous act to impress Moses before asking him to assume the mantle of leadership. God shows this sign so that Moses could grasp the meaning of divine power. But that begs the question; couldn’t God have performed another miracle even more striking, more convincing, more indicative of his control over the entire world rather than just a single bush in the desert aflame which was not consumed?

Rabbinic commentators supply us with a beautiful answer. God wasn’t simply performing a miracle. He was sending a message. God knew what was uppermost in the mind of Moses. From the time Moses fled from Egypt and watched his brothers suffering under Pharaoh’s brutal oppression, Moses worried and wondered: Are my people still alive? And so the very first thing God did was to reassure Moses – not only for the present but for all the days of the future as well.

When Arnold Toynbee completed his classic ten volume analysis of the rise and fall of human civilizations, the study of history, he was troubled by one seeming refutation of his universal rules governing the inexorable decline of every people on earth. Only the Jews survived in defiance of Toynbee’s carefully reasoned analysis. So Toynbee proclaimed the Jews nothing more than “a vestigial remnant,” a people destined to shortly expire.

But somehow, in spite of all those brutal attempts to destroy the children of Israel, Jews have demonstrated the ongoing miracle of burning bush – and the flame that will not be extinguished.

Jewish history defies explanation. Jewish survival is nothing short of a miracle. But it is a miracle long ago predicted by God. And it is a miracle which, God assured Moses, will never cease to repeat itself until the end of time.

A famous Russian author, although not Jewish, understood this message of the burning bush well. Leo Tolstoy, an Orthodox Christian best known for penning War and Peace, wrote this in 1908:

A Jew is the emblem of eternity. He who neither slaughter nor torture of thousands of years could destroy; he who neither fire, nor sword, nor Inquisition was able to wipe off the face of the earth; he who was the first to produce the oracles of God; he who has been for so long the Guardian of prophecy and has transmitted to the rest of the world - Such a nation cannot be destroyed. The Jew is as everlasting as eternity itself.

No, the everlasting torch does not come from Greece. Its civilization is long gone; its empire is no more. It is the Jewish people who continue to be the bearers of light to the world, fulfilling the role the prophet Isaiah assigned to them. It is the Jewish, not the Olympic, torch which replicates the miracle of the burning bush, and against all natural law surviving in spite of all the efforts of its enemies.

And indeed it is a measure of great consolation that in the very spot where Hitler swore our final and total destruction Jewish children have come back in the thousands to play and to assert with joy our continued presence on earth.

Hanukkah: From Oppression to Freedom
Adam and Eve Were Vegan
Bechukotai 5782: Divine Retribution
Behar 5782: Working to Live or Living to Work?
Comments
MOST POPULAR IN Jewish Society
Our privacy policy