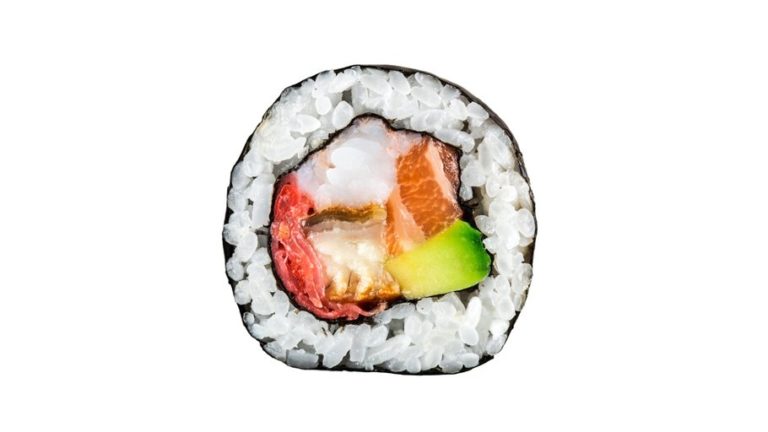 At the average wedding, the sushi bar often has better attendance than the chuppah ceremony.

There is something fishy going on in the Jewish world. At nearly every simcha and celebration, Jews are stuffing themselves to the gills with creatures that once had gills. We, of course, are talking about the sushi sensation sweeping the nation. It is washing over the Jewish community as Jews show their affinity for fins.

Obviously, there is more to a simcha than sushi. Most Jewish celebrations also feature other fundamental fixtures like coat-room chaos, controversial table assignments, family photo fiascos and family members who may not be on speaking terms but who are on hora-dancing terms. Speaking of dancing, most Jewish celebrations these days have the ever-popular and sometimes annoying dance motivators. While dance motivators may sometimes be necessary at a Jewish event, eat motivators are never required. If anything, eat dissuaders should be used to curb buffoon-like buffet behavior and to prevent glaring and galling gluttony.

Speaking of eating, the sushi bar certainly has become a main attraction. At the average wedding, the sushi bar often has better attendance than the chuppah ceremony. At bar mitzvahs, sushi bars are so ubiquitous and crowded that the event should be officially renamed the “Sushi Bar Mitzvah.”

There is nothing particularly Jewish about sushi except for the consumption of room-temperature fish, which arguably is reminiscent of lox, sable, herring and gefilte fish. Sushi, however, is different because it is not cured, pickled or otherwise manipulated. Sushi, like an overly honest friend, is completely raw.

“Sushi” is a Japanese word that literally means “marinated rice” but generally refers to thinly sliced fish served on a bed of rice. Technically, when the same fish is served without the rice, it is “Sashimi,” and when it is combined with other ingredients into a roll, it becomes “Maki.” (Yes, when it is rolled and served to kids with macaroni and cheese, it becomes Wacky Maki.)

Maki rolls are fun because of their colorful names like the Volcano Roll, Dragon Roll and Rainbow Roll. For some reason, thus far Jews have not created Jewish-themed Maki rolls. One could argue that the time has come for sushi rolls such as the Three-Day Yontif Roll, Rainy Day Sukkot Roll and Machatanista Roll. Other Jewish-themed rolls might include the:

Sushi is meant to be eaten with chopsticks, utensils that are not really conducive to “essen and fressen.” Chopsticks require too much precision and effort and, for the uninitiated, impede mass consumption. For this reason, some Jews prefer eating sushi with a fork and knife or, if socially acceptable, a shovel and funnel.

Final thought: If every day you seize the chance to eat fish from the Cyprinidae family, then you truly are putting the “carp” in carpe diem.

Jew Tube: The New TV Season
Why Are The Prayers Of Yom Kipur So Repetetive?
Ha'azinu 5783: A Time for Unity!
Twisted Thinking
Comments