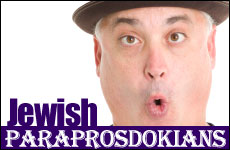 50 paraprosdokians for the articulate Jew.

“Para – what?” When I first heard the term I wondered if it was either an ancient Druid sect, or a small Jewish branch of the Kardashians tucked away in Haifa.

The word (that no one one can pronounce) has actually been around since the late 20th century, but if you missed it in High School, trust me, we all did.

Well, today it’s been dug up and flying everywhere, which is fascinating in a society that grunts no more than two words, and abbreviates “bye bye” to BIBI.

Many different crunches affect the abs. My favorite is Nestle.

So what then is a paraprosdokian? It’s a figure of speech in which the first part of a phrase or sentence seems normal, even complimentary … and the second, or last part, shocks and shakes the first part to its tenuous foundation. It can also extend the meaning of Part One.

For example: “There’s a bunch of different crunches that affect the abs… my favorite is Nestle.” — Shmuel Breban

One of the most famous is Henny Youngman’s “Take my wife; PLEASE!”

From Aristotle, Winston Churchill, Shakespeare, to Groucho Marx and Homer Simpson, comics and politicians have been using these “paras” for years. But the real masters of the art are, of course, We Jews who have been known, on occasion to flip and switch word order to make a point for drama, humor, and to conjure a well-turned curse on the deserved.

So for you, dear readers, I’ve created and collected paraprosdokians that We Jews can use with a lot of impunity, never mind impudence.

Enjoy, but use with caution. For example, in some situations it’s better to say the first part and think the second. This is recommended if you want to live anywhere except maybe Croatia, where trust me, even your 17 “neighbors” won’t invite you to shmooze.

50 Paraprosdokians for the Articulate Jew

2 ― “Knowledge is knowing a yutz when you see one. Wisdom is not making him your accountant (or your husband).”

3 ― “Oy, the food here is terrible… and such small portions!”

5 ― “Darling, for our anniversary let’s go eat someplace we’ve never been before… the kitchen.”

7 ― “Freida, I owe you thanks. I always saw the good in people till you taught me… there’s an exception to everything.”

8 ― “Darling that outfit, the dress, the shoes, the hat, you wore to my David’s Bar Mitzvah, I never saw anything like it... and please God, I never will again.”

9 ― “Mamala, there’s nothing wrong with you mentally… that a team of psychiatrists in Switzerland can’t cure.”

11 ― ”Sweetheart, they charged you for cutting your hair? Better they should charge you for finding it.”

13 ― “A square you’re not, sweetie. Even if they did build a shtetl around you.”

14 ― “Thank God your daughter’s an Einstein… because a beauty she isn’t.”

15 ― “She got her good looks from her father… the plastic surgeon.”

16 ― “You have such a voice! So mamala, why spoil it by actually singing?”

19 ― “You don’t seem to be yourself lately. So tell me, what brought about such an improvement?”

20 ― “Have I told you, you have that certain something… bupkes.”

21 ― “I know you’re hoping for a stroke of luck… your rich uncle’s retirement.”

27 ― “Okay already. Your argument about the Middle East is sound… nothing but 'sound.'”

28 ― “Going to a shul doesn't make you a Jew, anymore than standing in a bakery makes you a bobka.”

29 ― “True, you can at times be humorously ironic… but the rest? I think you may suffer from ‘ironic’ deficiency.”

30 ― “Darling, I’m glad you have a clear conscience after what you did… even if you forgot everything since the Nixon administration.”

31 ― “That dress fits you perfectly… if you were dead for two weeks.”

32 ― “Mamala, one thing you mustn't miss when you are in Eastern Europe ― the plane!”

37 ― “Mamala, money can’t buy happiness… but trust me, it makes misery easier to live with.”

38 ― “Hymie, we’ve married for years. Of course you’re never too old to learn… narishkeit (something stupid.)”

39 ― “Laughter is the best medicine… since you don’t have health insurance.”

40 ― “A Friend In Need is usually something you don’t need.”

41 ― “Mazel Tov! Your Rachel just got promoted! Let’s hope, this time she keeps it.”

43 ― “Joshua, your girlfriend, words can’t express. So bring me the Tums.”

44 ― “Mamala, your gift was such a lovely thought. You couldn’t have a better one?”

46 ― “You should be on Mt. Rushmore… who else has so many stones in their head?”

47 ― “Have I ever told you how colorful you are? Mostly yellow and green.”

50 ― “You made a perfect Passover. May your wife eat matzah in bed and may you roll in the crumbs.”

My Challenge to Israeli Scientists

The Yiddish Quiz of Fools

The Year We Built the Sukkah
Vayelech 5783: Regret and Repent
Rabbi Sacks: Focus On the Important, Not the Urgent
Put Your Foot Down: Are Human Feet Poorly Designed?
Comments
MOST POPULAR IN Jewlarious
Our privacy policy
Aish.com Is Looking for Great Writers