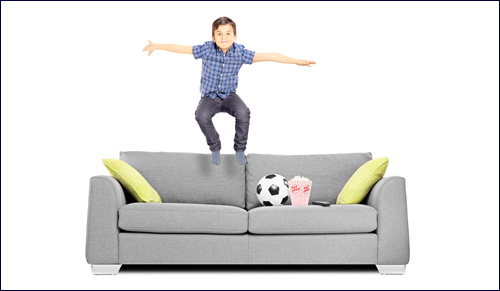 Each of us is given different traits, inclinations, capabilities. The only question is: what do we choose to do with them?

I am the mother of that boy, the one makes teachers drink more coffee and take an Advil before they enter the classroom. The one whose mother sees the school number on the phone display and never thinks: Is he sick? Rather she just wonders: What has he done now?

Don't get me wrong. My son is one of the most adorable children you can ever hope to meet: a bright-eyed, cheerful imp who is adept at charming people off their feet. He is also truly caring and generous. Unfortunately, all these wonderful qualities can suddenly go into hiding and all you’ll see in him is his severe case of ADHD.

Before he got his diagnosis, his behavior kept baffling me. He was my first child and I was so proud of him: of his quick wit, advanced vocabulary, friendly demeanor…and yet I couldn't understand him. How could such a smart child behave so badly? How could a child with a giving, loving nature bite a friend because of a silly disagreement? How could a child who hugged me so tightly defy me minutes later?

As sweet and wonderful as my son is, he has a very hard time always behaving in the way we expect children to behave.

The ADHD diagnosis gave me the answer. As sweet and wonderful as my son is, he has a very hard time always behaving in the way we expect children to behave. ADHD is far from being a disorder which only affects attentiveness; it is a disorder of executive functions. Children (and adults) with ADHD find it immeasurably more difficult to do things like self-regulate their emotions, plan ahead, or use working memory.

While there are many things that we are doing to help him (and yes, medication is one of these things) I used to worry almost obsessively about my son's future. I needed to know what the likeliest outcome was for a child with the kind of ADHD which made him stand out everywhere.

I read the statistics and the anecdata till my head hurt. People with ADHD are more likely to end up in prison…but they are also likely to be successful entrepreneurs. People with ADHD are involved in many more accidents…but they also demonstrate remarkable creativity. Some books and websites tried to tell me that ADHD was a terrible disability. Others tried to sell the idea that it was a tremendous gift. I didn't know whom to believe. I didn't know which of the pieces of information I found applied to my son. I didn't have a crystal ball, but how much did I wish that I could see into the future and sooth my anxiety!

One day while once again letting worry get the better of me, I recalled a Talmudic saying I had read some years ago. "A person who is born under the astrological sign of Mars will have a tendency to spill blood… he will be either a surgeon, or a criminal, or a butcher, or a mohel."

Think about it. How would you feel if you were given such a diagnosis: “Your child was born with a tendency to spill blood…”? Wouldn't you be freaked out?

Yet the Talmud does NOT freak out. A tendency to spill blood? Just another trait. And the one who has this trait can be average, righteous – or wicked. Just like any other person.

My son is not obedient by nature. Unlike other children, he is not inclined to bow his head respectfully just because someone is older, bigger, or scarier than him. Is that necessarily a bad thing? Too many of us, after all, spend our life showing respect and deference to certain people just because they are bigger, richer, or more influential. My son, on the other hand, is not likely to ever fall into that error. Yes, he needs to be taught respect and humility, but when he will show respect it will only be because he has internalized the moral duty demanding that. He will never show respect out of fear or inferiority feelings.

Or take his abundant energy. A child who can’t sit still in the classroom is disruptive to their teachers and peers, but life in general is not much like school. One should, of course, invest their energies in the right thing, but what a blessing it is to have prodigious energies and use them for the right cause! Think of it as doing good with a racing car engine instead of with an electric bicycle engine. How often do we all wish that we could do just a little bit more? A person with ADHD can often do a great deal more – and without getting exhausted.

Yes, my son has unique challenges, but none of this determines his future.

Even traits like rule-bending and boundary testing have their positive sides. There are rules which must not be bent and boundaries which will never change, but many things in life are more flexible than that. In many areas of life, every progress that has been achieved was due to people willing to challenge old assumptions and to disregard common wisdom. Many experts, for instance, believe that Albert Einstein had ADHD. It can definitely explain the fearless way in which he revolutionized physics. So what if something had been held true for hundreds of years? That alone would never be a consideration for most people with ADHD.

I do not, of course, expect my son to turn out to be an Einstein. I have no idea what kind of person he is going to be – nor do I know that about any of my other children. But the Talmud's message about traits has helped me to stop fearing the future so much. Yes, my son has unique challenges, because he has a unique set of traits. But none of this can determine his future.

Instead of worrying, all I should do is parent him as well as I can, pray that he will always exercise his free will wisely, and believe that he is capable of greatness – just like any other child.

Parenting in a Pandemic

7 Rosh Hashanah Projects to Do at Home with Your Kids
Megillah Gorilla Saves the Day
Challah Reuben “Grinder”
Big OnThe Little Things
Comments
MOST POPULAR IN Family
Our privacy policy
Aish.com Is Looking for Great Writers