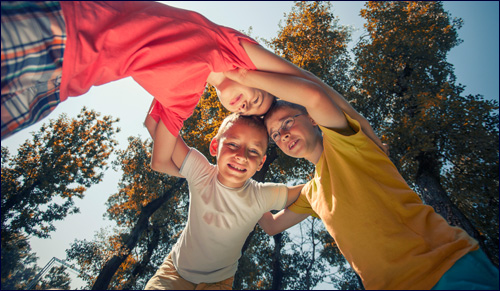 Jewish summer camp is one of the cornerstones of the Jewish experience. Summer camp helped form me into the Jew I am today. It taught me what it means to be a good Jew. It also taught me that we Jews don’t play regular sports. We played sports, but they were different. I know this, because I am watching the summer Olympics, and I do not recall ever playing these sports at camp.

Gaga demonstrated to the sports staff that if our lives were at stake, we did run.

Here are a few of the special sports we played:

Newcomb was the most serious game we played at Jewish summer camp. It is like volleyball, but you can catch the ball. Some people took the game to the next level by throwing the ball over the net and not looking to the exact spot they were tossing it. Those were the real athletes. Some children wanted to play volleyball, but that caused a big raucous. It was too dangerous. Too many children were getting hurt by the ball that was being hit to their side. From my understanding, when they noticed how bad the kids were at catching the volleyball, they made a sport of it.

They made sure that every young Jewish child felt like he or she was an athlete. And for that, I thank them for helping me realize how important it was to focus on my studies.

Bottle Cap Hockey was the number one game played during free hour. I was quite a competitor, I must admit. Free hour was quiet time, so we had to stay near the bunk and play sports that wouldn’t make noise, until we got excited. Excitement is hitting a bottle cap the length of the table all the way to the other guy’s hand. That is a reason to cheer. When it came to hitting a bottle cap between the opponent’s pinky and pointer finger, there were not many as agile as I.

Paper Football was another sport that I played with a mastery and finesse that could only be displayed by one who did not run track. We would fold a paper towel into a triangle, and then take part in the art of causing that paper towel to land on the end of the table. After which, we would flick the paper football through a field goal, made out of pointer fingers, and lose our minds. Without pointer fingers, we would have been at a loss for free hour sport.

We played paper football when drought hit the camp, and bottles were hard to come by. I was an avid paper football player the whole year round, as I also played it every Shabbat of my childhood, in shul. I had to do something in shul. My dad was making me go anyways. So I figured I would use my time in synagogue for something productive; namely, Paper Football.

Floor hockey is the most serious of Jewish games, as we were not coordinated enough to play hockey on ice. We played with a ball. A puck would have changed the makeup of the sport. That was how we figured out what sports we could play. We were allowed to play any sport, but we were not allowed to use the allotted equipment for the sport. We played hockey without a puck. We used bottle cap and our fingers. We played football with a paper towel. Athletic ability was secondary to the Jewish attribute of resourcefulness.

The idea behind Dodgeball was to try your hardest to hurt other children. The sport is played with the hardest flexible ball known to humankind, squeezable enough so that when it hits you the rubber is able to stick to your face for an extra second. This allows for the enhanced burning sensation of skin being removed from your skull. Rules: You get hit, you are out. You suffered enough, you do not have to play anymore.

Dodgeball was never on the schedule. Nonetheless, the counselors would implement a game whenever we did not clean the bunk well enough.

Again, the objective is to not get hit. Similar to dodgeball, the difference is that you cannot hold the ball in gaga, you have to whack it. Whack it as hard as you can at other children. The most similar game to this is skirmish (paintball) without protective gear.

We were not an athletic bunch, but the sports staff realized that if our lives were at stake, we did run. Even the kids with asthma.

Due to lack of coordination, many children ended up in the infirmary. The frightening level of competitiveness was the same reason the camp banned dodgeball and newcomb.

I have a feeling that the camp rabbis were baiting us into learning Torah. I never hit a homerun, but I did know Rashi’s commentary on the Red Heifer, and that was a grand slam to my rabbi at camp.

I was always convinced that Torah Baseball wasn’t a real sport. But I was good and they did call it baseball. That was enough for me. And I did sweat when they called on me to answer the question. It’s a shame they do not have Torah Baseball or even a Torah-Bee in the Olympics

I loved all of these sports. If gaga was a professional sport, I would be an all-star athlete. If soccer was a sport played with people on all four, looking like crabs, I would be a person the children looked up to. If I was allowed to catch the volleyball, I could have represented Israel in international competition.

But I will tell you this. I still play paper football, and I promise you, there is no greater feeling of achievement in sports then when you see a folded paper towel land on the end of the table.

The Seven Secrets of Dysfunctional Families
Adam and Eve Were Vegan
Bechukotai 5782: Divine Retribution
Behar 5782: Working to Live or Living to Work?
Comments
MOST POPULAR IN Funny Stuff
Our privacy policy