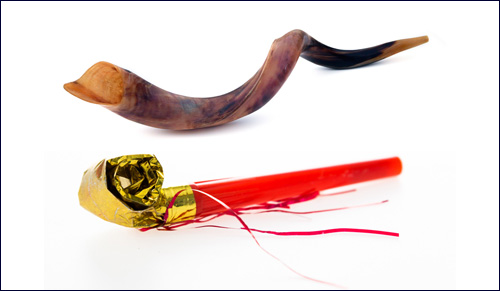 Instead of the ball drop in Time’s Square, we let the matzah balls drop into our soup.

I have a really nice, non-Jewish neighbor who tries very hard to incorporate little traditional, cultural, or religious things into our friendship to let me know she's respectful of and very interested in Judaism. She usually gets it right . . . until she doesn't. Last April I included her in our Passover festivities and she decided to contribute to our meal with something she knew we partook in weekly . . . a ceremonial challah!

Last Dec 31st, she invited me to her home for a New Year's Eve party and when I came through the door she shouted, "Shana Tova!" On her dessert buffet table was a cheesecake, a box of See's candy, a chocolate Bundt cake, AND a dish of apples and honey. That was interesting.

When midnight approached and she distributed to all her guests a box of festive glittered hats, noisemakers, confetti to toss, and paper party horns to blow, I was handed a kippah, a grogger, bread crumbs to throw, and a ram's horn. Needless to say, I felt it was time to say something about her good intentions.

1. VOWS – On Dec 31st people make their yearly resolutions to eat a less quantity of food each day. On Rosh Hashana, I resolve to cut back each day as well . . . because I'm in training for Yom Kippur.

2. WRITING Come Jan 1st thru the 7th, people will (out of force of habit) jot down 2017 when they sign and date something. After last Rosh Hashana, no Jew accidentally wrote 5777 when they filled out their checkbook.

3. ROUND CIRCLES: At 11:59 pm on Dec 31st, someone will invariably nudge a family member awake to gawk as the NYC Times Square ball drops to the ground while yelling, "So? Isn’t that exciting!" On Rosh Hashana, inevitably a matzo ball will fall onto the kitchen floor and without even a second glance I'll shout, "Nu? Clean it up!"

4. PRESSURE: The last week in December everyone is asking everyone else, “What's your big deal plan for New Years and what will you be wearing? And you're not staying home just doing nothing, are you?" In September, no Jew inquires where another Jew will be on Rosh Hashana, nor about their attire. Where will they be?? In shul all day long, shvitzing up a storm because the weather never cooperates for donning High Holiday tweed suits or stockings for the ladies. And staying home all day doing nothing? Not an option.

5. SONGS: Auld Lang Syne is a traditional melody to belt out on New Years, but after "Should old acquaintances be forgot..." many have also forgotten the rest of the lyrics and so they fake it with lame mumbling. Similarly, Avinu Malkeinu sh’ma kolenu …,” comes out nice and strong but after a certain point, some people like me inexplicably and feebly trail off with our lips still moving.

6. MIDNIGHT: It's the crucial countdown, and apparently some people have the habit of kissing someone at the exact moment when the clock strikes 12:00. But we Jews are different. Instead we like kibbitzing and it's gonna go on all night. As for that kiss, Aunt Sophie’s face wrinkled cheek will do just fine.

7. WHEN: Ask anyone when the secular New Year will ring in and you’ll get a look like you’re a mashuganah. But innocently inquire what date Rosh Hashana falls on this year and instantly eight Jews are googling, debating, and texting their rabbis.

8. ENTERTAINMENT: There’s probably a cool DJ at a New Year’s Eve party and he’s gonna be up on all the latest and greatest from the Top 40 and interact heavily with all the guests. But people don’t usually expect the Cantor in shul to chant anything new on Rosh Hashana. But if he did come down off the bimah to sing the Hineni prayer, it would be a fantastic surprise.

9. SYMBOL. A baby is used to personify the start of the New Year. It's represented as a chubby tot wearing nothing more than a diaper and a sash across his torso that depicts the year he’s representing. Show a Jew an infant like this on Rosh Hashana (or any day of the year!) and she'll kvell over the size of his fat, cute pulkes and then admonish, "Put some clothes on this boychick! Whadya tryin’ to do? Catch him his death of cold, G-d forbid??!"

And with that, if you are so inclined, raise a glass of champagne (or Manischewitz wine) high into the air, because soon we’re gonna party like it's 2018, even though we know it’s actually 5778. And as for my well-meaning neighbor friend? I’m prepared that next Halloween her children may show up on my doorstep dressed as Esther and Mordechai, bless her sweet heart.

Jewish Sports Legends
The Power Of Prayer
Va’etchanan 5782: A for Effort
Can You Show Me This "God?"
Comments
MOST POPULAR IN Jewlarious
Our privacy policy
Aish.com Is Looking for Great Writers