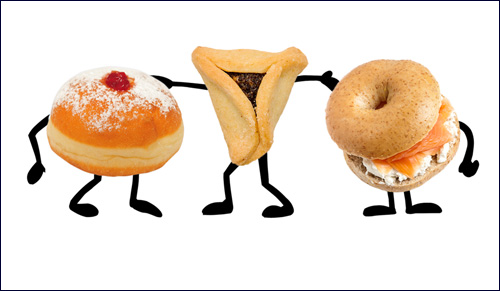 Manischewitz: Welcome to our Jewish Cuisine Support Group. Remember – What happens in the Steinberg fridge stays in the Steinberg fridge! Later today we’ll have an eloquent guest speaker on the profound topic, “Getting Maudlin over Mandlin – Much More Than Just Soup Nuts.” Personally, I can’t wait. Meanwhile, who wants to start us out?

Chicken Soup: I will. Oy! “Jewish Penicillin?!” I can’t take all the expectations and pressure. And now with this whole antibiotic/probiotic controversy – are they for or against me? Then there’s Chicken Soup For the Kosher, Vegetarian, Gluten Soul! Where will it all end?

Sufganiot: At least you get served often. Some of us holiday foods only come out eight nights a year. I’m a shut-in, I tell you. Nobody even pronounces my real name correctly. They just refer to me as “Jelly Donut.” Mistaken for a common peasant from Krispy Kreme. Imagine!

Challah: Quit griping. Even though you’re related to my Carb family, the reason people don’t break bread with you regularly is because cholesterol is your middle name. You’re just too oily.

Latke: Hey, who you calling oily? Isn’t that the point? What’s wrong with a little Chanukah miracle? I’ll drop you like a hot potato if you don’t quit acting holier than thou.

Challah: Ya wanna piece of me?? I truly AM holy. When’s the last time anyone covered you with an adorable crayon-scribbled, glitter glued cloth made by a preschooler and recited a special blessing?

Brisket: Alright, enough already! Can we stick to our main issues? I have a big confession. I fell off the wagon last night, so it’s back to AA meetings for me.

Hamentashen: For shame! But at least you’re not named for an evil villain everyone boos. Talk about inferiority complexes.

Noodle Kugel: Let’s dish about relationships, shall we? I hear Gefilte fish and Cooked Carrots are a real item.

Bagel: Well I’m lonely. There’s an empty hole ever since she left. I know, I know . . . I still have cream cheese, but it’s not enough.

Knish: Who’s he referring to?

Kugel: Lox. Prices went up and he never sees her anymore. She was totally hot, too.

Bagel: Not totally hot. But definitely smokin’. And I miss how she’d say, “I’ve got you covered, Poppy.” That was her nickname for me.

Matzah: Ahh, Poppy Seed Bagel, you’re just Co-Dependent. I should know about this terrible (bread of) affliction. I thought I was nobody unless I was “Matzo Brie.” But she turned out to be a bad egg. Now I proudly show up solo to Seders. No butter, no salt, no schmear. I don’t even need any of those chocolate toffee toppings any longer. I’m a confident individual on my own and people respect that.

Chopped Liver: Aw, you guys are the best thing since sliced bread. But what am I, chopped liver? I feel rejected ever since the Steinbergs vowed to drop ten pounds. We’re probably all getting eviction notices.

Israeli Salad: Speak for yourself. They’re turning to me during their health craze, so I’ll be putting roots down right here in this produce drawer. Seen any unencumbered cucumbers?

Manischewitz: Well everyone, clearly we all have a lot on our plates. The Steinberg Weight Loss program is a common issue we continue to face in January right after all the secular holidays.

Gingerbread Man: Secular holidays! That’s the first familiar thing you’ve said. I’ve been sitting here patiently awaiting my turn to talk about those degrading cookie exchanges and getting hung up at tree-trimming parties. I haven’t been able to relate to anything during this entire meeting and I feel soooo confused.

Cream Cheese: Of course you’re confused. The Christmas Foods Support Group meets inside the Smith’s Pantry on Tuesdays. You can hang with the rest of the fruitcakes. But beware – their leader constantly boasts and brags – a real ham.