Aish Center at the Western Wall 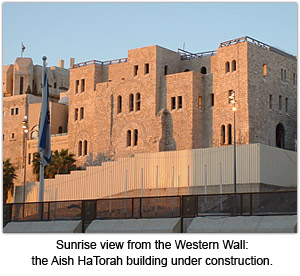 Standing at the Wall is the moment when people are most open to exploring the meaning of Jewish identity and the role each individual plays in Jewish destiny. With nearly 3 million visitors to the Wall annually, this provides an extraordinary opportunity for Aish HaTorah, whose mission is to empower the Jewish people and to fulfill their destiny of Tikkun Olam (perfecting the world).

In 2009, philanthropists, government officials and dignitaries from around the world gathered to celebrate the dedication of Aish HaTorah’s spectacular new educational center directly across from the Western Wall. Named the Aish World Center Dan Family of Canada Building, it boasts a breathtaking view – directly overlooking the Temple Mount, rising seven stories above the Western Wall Plaza.

The new Aish Center hosts thousands of visitors annually to a variety of educational programs including the world-famous Discovery Seminar, the Jerusalem Fellowships leadership program for college-age students, the Hasbara Fellowships for Israel activism training, the Executive Learning Center and the Essentials introductory program. As well, private individuals and organizations can arrange for events like bar mitzvahs, weddings and Shabbat dinners in the beautiful dining room or on the spectacular rooftop terrace. 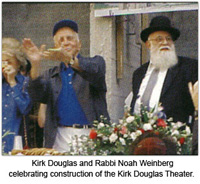 Also slated for the new building is the Western Wall Experience, a major attraction spanning three floors that takes visitors through a virtual tour of all of Jewish history – from Abraham until the present day – in a highly interactive, hi-tech environment. Designed to accommodate 300,000 people annually, the Experience is expected to be completed in 2015.

The Experience features the Kirk Douglas Theater, named after the famous actor who was an active student at Aish HaTorah in Los Angeles for many years. Around the time Kirk began to rediscover his Jewish heritage, he was sitting at the Western Wall, feeling very emotional, yet perplexed at exactly what caused him to feel this way. At that moment, he thought, There ought to be a facility here that explains the meaning and importance of this site. This of all places is where people are inspired to ask, “What does it mean to be Jewish? What is our historical mission? What yet remains to be achieved?”

When Kirk realized this is precisely Aish HaTorah’s concept, he made a major commitment to construct a giant-screen theater as the centerpiece of the Western Wall Experience. 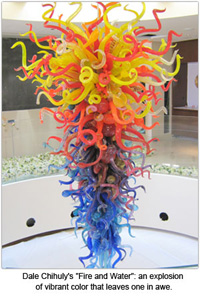 The Aish building is an architectural and historical marvel, with elements dating back to the Second Temple period. For example, running through an exterior wall of the building is an actual aqueduct that was used to bring water to the Holy Temple. As well, the building features beautiful reconstructed archways from the Crusader period.

Beyond this, the building is a striking combination of old and new. A glorious atrium is punctuated by a modern glass sculpture by Dale Chihuly, the most successful and talented glass artist in the world. Entitled, “Fire and Water,” the multi-dimensional, two-story-tall sculpture took four months to create in Chihuly‘s Seattle studio, and was delivered to Jerusalem in hundreds of boxes. (See a short film of the sculpture being installed.) The sculpture’s message, beauty and impact is so great that critics have likened it to the iconic Chagall Windows installed at Jerusalem’s Hadassah Hospital, with the Jerusalem Post calling it “one of the most significant works of glass art to be permanently exhibited in Jerusalem.”

Model of the Holy Temple 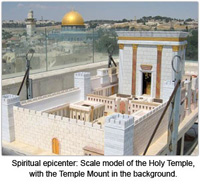 Another unique attraction at the new Aish building is a 1.2-ton model of the Holy Temple – which sits on the awe-inspiring rooftop terrace overlooking the site where the real Temple stood for 1,000 years before being destroyed by the Romans.

The Temple model, the largest of its kind in the world, is constructed at a scale of 1:60. It features a remote-controlled hydraulic system that raises the sanctuary section of the Temple, offering an internal view of key elements such as the Holy of Holies, the Menorah and the Ark of the Covenant. 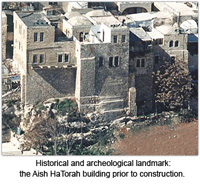 How did this coveted piece of land – comprising 40 percent of the frontage facing the Western Wall – come into Aish HaTorah’s possession?

In 1967 when Israel recaptured the Old City of Jerusalem, the Israeli government – knowing this was the most precious piece of real estate in the Jewish world – felt compelled to use it for something very special and important. But they weren’t sure for what. Aish HaTorah then proposed a Jewish educational center designed to give every person who visits the Western Wall a greater understanding of Judaism’s holiest site, and what that means in the larger context of Jewish destiny. Hearing this, the Israeli government said, “That’s the perfect concept. Here, take the whole thing.” Rabbi Noah Weinberg zt”l, the founder and dean of Aish HaTorah, always saw it as a personal miracle that Aish HaTorah was awarded this precious site. When people would visit his office overlooking the Western Wall, they would often ask, “How did you get such a great office?” To which Rabbi Weinberg would reply, “I work for the right Boss!”

In his last years, Rabbi Weinberg made the new educational center one of his highest priorities. He took an active role in crafting the educational curriculum, brilliantly articulating the development of the Jewish people’s partnership with God to fulfill human destiny. The new building exhibits a “Rabbi Weinberg Tribute Wall,” which features short films of Rabbi Weinberg’s wisdom and touch-screen access to all his teachings. 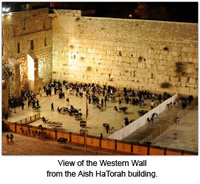 “Aish HaTorah has spent the past four decades educating Jews about the beauty and power of our heritage, and this building is a culmination of those efforts,” says Rabbi Eric Coopersmith, CEO of Aish HaTorah International. “We have poured all of our combined know-how and creativity to produce an educational facility – in the world’s most inspiring location, and utilizing the most advanced multi-media technologies – that can impact hundreds of thousands of individuals, and consequently the collective Jewish world.”