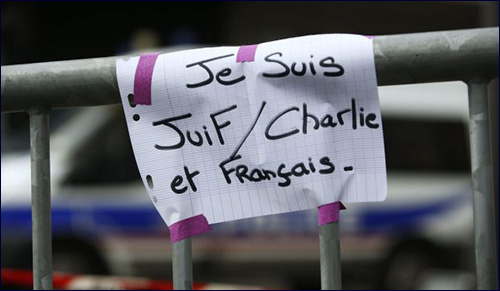 I am a Jew. Don’t let the Jews of France stand alone.

Four Jewish hostages were murdered at a kosher grocery store in Paris by a terrorist who had connections to the two men who attacked the offices of Charlie Hebdo earlier last week. The gunman at the supermarket near the Porte de Vincennes metro station was killed by the police on Friday while his wife escaped, and the Charlie Hebdo gunmen were killed in a separate raid near Paris. After the attack of the newspaper office many people around the world twittered #Je Suis Charlie, I am Charlie Hebdo, and the hashtag rapidly began to trend as everyone expressed outrage for this attack on free speech.

Following the horrific murders at the kosher supermarket, many again took to Twitter urging others to tweet #Je Suis Juif, I am a Jew, to express the same outrage for this attack on religion. But #Je Suis Juif isn’t trending. We, the Jewish people, stand alone. Isn’t freedom of religion just as important as freedom of speech? Isn’t it just as evil and shocking for people to be killed for who they are as it is for what they say? Where are all the Twitter supporters now?

But there were some powerful Tweets that did speak up for the Jewish nation:

Mark Ferguson: We must stand by French Jews as we stood by French cartoonists and police. #JeSuisJuif

Rina Wolfson: So it wasn’t just about cartoons after all. Or is buying kosher bread offensive and provocative too? #JeSuisJuif

Ben Shapiro: If you tweeted #JeSuisCharlie but won’t tweet #JeSuisJuif today, I think we can all figure out the reason.

David Heyman: I suppose it was perhaps inevitable that the conclusion of #JeSuisCharlie would sadly be #JeSuisJuif

For the first time since World War II, there were no Shabbat services at the Paris Grand Synagogue this past Shabbos. Jewish leaders were told to close their synagogues and Jews all over France were urged to stay home. Mothers and fathers with babies in their arms who had gone to buy food for Shabbos were seen running hysterically out of the supermarket, escorted to safety by heavily armed policemen. Families who have lived in France for generations are wondering how much longer they will be able to remain there. On Saturday hundreds of thousands of people marched through the streets of France with the signs “Je Suis Charlie” to protest the terrorist attack against free speech. But where were the signs protesting the murder of four innocent Jews?

I am a Jew. My grandmother said it to the department store Santa Claus when she politely refused his candy cane offer.

I am a Jew. My mother said it when she refused to campaign on Shabbos when she was running for the NY State Supreme Court.

I am a Jew. My seven-year-old son said it to the dentist when the dentist asked why he was wearing a velvet cap on his head.

I am a Jew. I said it to my friend at the gym when she asked me if I heard what was happening in France. I am a Jew, I said, and I started to cry. I am a Jew, and my heart is breaking. And she looked at me and said: I am a Jew too. My heart is also breaking.

I am a Jew who lit candles on Friday night and cried as I saw the images of the fleeing hostages flicker before me in the flames.

I am a Jew who watched my husband walk out the door to go to shul on Shabbos and thought of all the people in France whose synagogues were closed.

I am a Jew who watched my children playing Russian School Room on Shabbos afternoon and asked them what they were doing. It’s a game, they said. In the game the teacher tries to find out who is Jewish in her class by asking questions. Only one of us is the Jew, and the teacher wants to know who it is because it is a crime. “Who taught you that?” I ask. “What kind of game is that?”

“Everyone knows this game,” they tell me, and they go back to playing. I stand a few feet away and listen in. The child playing teacher asks: What is your name? Where are you from? Tell me your mother’s name.

I never played this game as a child. It doesn’t make any sense to me. Why are my children, whose great- great grandparents were born in New York playing Russian School Room? Why are my children, who learn in Jewish schools and are part of a beautiful Jewish family, learning at such a young age that they are hated for who they are? That they stand alone for what they believe?

For the people of France and for every Jew in every country, and for Jewish children everywhere, I call out to the world: Je Suis Juif! My voice echoes the cries of those who have come before me, those who have lived and died for Your Name: I am a Jew. I was born a Jew. I live as a Jew. I will die as a Jew. #JeSuisJuif Don’t let the Jews of France stand alone.

Everything and Its Opposite Is Given as a Reason for Antisemitism

Rescuing 100 Jews in Ukraine on Shabbat
It Takes A Lot Of Faith To Be An Atheist
How Instagram Brought Back This Nostalgic Soup
What Makes Eli Run?
Comments
MOST POPULAR IN Israel
Our privacy policy