It's Not My Fault 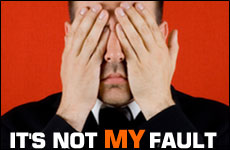 A strategy for a meaningful Yom Kippur.

The late Charles Schultz has a Peanuts cartoon where the authoritarian Lucy is busy handing out to her friends lists of their faults and imperfections. When challenged by Charlie Brown as to how she has the right to do this, she responds, "I want to make this a better world for me to live in."

We live in a "me" society. In fact, sometimes it seems as if we live in a culture of victimization where it is always someone else's fault. How easy it is rationalize my mistakes and blame circumstances "beyond my personal control" for errors of my own creation.

The self-centered syndrome becomes a norm for those who find it natural to "pass the buck" and place the blame on others. The Talmud (Avoda Zara 17a) offers a fascinating narrative with a twist on the lengths to which this self-centeredness may extend.

We are introduced to a man named Elazar ben Durdaya who was an infamous sinner with a particular addiction for pleasures of the flesh. Once he heard of a particular courtesan reputed to be both very beautiful and very expensive. His appetite was aroused, and although she plied her trade in a far-off land, he enthusiastically journeyed to meet her.

During the visit she blurted out how Elazar ben Durdaya would never be capable of making amends and repenting for his self-indulgent ways. Elazar was shaken by her remarks and abruptly left her services, fleeing to the mountains and hills. The Talmud proceeds to describe how he pleaded with the forces of nature to pray on his behalf that he should be forgiven.

Rabbi Yoel Schwartz suggests that the Sages interpret this to mean that when Elazar ben Durdaya appealed to the forces of nature, it was his way of attempting to shift the blame. He explains as follows:

If only we could have chosen different parents.

"Mountains and hills, pray for me!" The Hebrew for mountain, harim, can be interpreted as horim, parents. In other words, Elazar ben Durdaya blames his parents for his problems. After all, it is they who brought him into this world. How many of us believe we are but products of our nurturing. If only our upbringing had been different! If only we could have chosen different parents. If only they had raised me differently and not been so indulging... or demanding... or controlling. If only...

Finding no effective succor in the mountains, Elazar despairs and turns to the heavens and the earth: "Pray for me!"

"Heavens" refers to the lofty spiritual leaders. Like Elazar ben Durdaya, how often do we wish to blame our teachers and rabbinic leadership for our faults? "After all," we contend, "if only the rabbis and teachers had not been so distant and out of touch. It was because of them that I became disenchanted and alienated from my Judaism. If only they had been more approachable. If only they could have spoken on my level and understood me. If only they could have addressed where I was coming from. If only..."

When Elazar turns to blame the "earth" it represents our environment, friends and social milieu. The "guys in the bar" and other social influences corrupted me. It is the people who befriended me and hung out with me that are to blame for the way I have become! If only I could have had different friends. If only a different peer group had been around. If only...

Elazar then runs to the sun and the moon. This represents the glitz and bright lights of society. Today, that would mean our exposure to non-stop entertainment that has molded us. It is easy to believe we are simply products of the media and music that dance before us. The internet and advertisements capture and bedazzle us. If only we hadn't been so affected by Hollywood, 24/7 satellite channels, the iPods, video messaging, reality TV and Internet blogs -- that bombard us through no apparent fault of our own! If only...

When Elazar is not able to convince the sun and the moon to accept responsibility for his own actions, he turns to plead with the stars and the constellations. He declares that he was not able to control his lustful tendencies because he was born under the wrong star. It was all written in the constellations and predestined. If only he had had control over when he was born. If only...

Just as Elazar grudgingly comes to accept that that the forces of nature have no responsibility for his problems, he goes and sinks his head between his knees and weeps. He weeps not out of self-pity. At last, he weeps out of remorse. He weeps until his soul leaves him.

At that moment, the Talmud concludes that a heavenly voice proclaimed: "Elazar ben Durdaya is appointed for life in the world to come." A moment of profound remorse counteracted a lifetime of debauchery.

Rabbi Yehuda's emotional reaction has a powerful message for all of us as we think of our own teshuva (repentance) during the High Holiday season.

Was Rabbi Yehuda crying because he realized that while he lived piously, Elazar, the picaro, indulged in every lust he could discover? Does Rabbi Yehuda toy with the idea that perhaps he should give saintliness a rest, live it up a little, and leave repentance for the end, a la Elazar? Perhaps he feels it unjust that he and his peers live lives of restraint while Elazar ben Durdaya abuses the system and gets to the same place in the end?

No. This is too petty and cynical a reaction for one as great as Rabbi Yehuda the Prince.

The mystery is solved by a 20th century sage, Rabbi Chaim Shmulevitz, late Dean of the Mir Yeshiva. In order to understand Rabbi Yehuda's reaction, Rabbi Shmulevitz carries us back in time to an incredibly stirring event in Jewish history, the Splitting of the Red Sea.

Many generations ago, when the Jewish people had fled Pharaoh's harsh rule, they escaped slavery's clutches only to be chased by the Egyptian chariots. Upon reaching the Red Sea, one man took the initiative to jump into the sea's turbulent waters. Once he put his foot in the water, the sea miraculously split, allowing the Jewish people to pass through unharmed.

The Torah tells us that everyone who heard of the splitting of the Red Sea was amazed: "Nations heard and shuddered; terror gripped the dwellers of Philistia. The chieftains of Edom panicked; trembling gripped the mighty ones of Moab; all the dwellers of Canaan melted away" (Exodus 15:14-15). Yet the Torah tells us that of all these people, only Yitro, Moses' father-in-law, decided to act upon the experience.

Yitro was momentarily awestruck like everyone else. Yet out of tens of thousands, he alone made lasting changes.

We have countless opportunities to capture inspiration and acquire eternal greatness.

This is why Rabbi Yehuda cried. He realized that in life we have countless opportunities to capture the moments of inspiration and acquire eternal greatness. Sometimes the inspirations are pleasant ones, like watching a baby's first steps or admiring a sunset. Sometimes the awakening comes in the form of a terror attack or a tsunami.

Yet how many of us, like Yitro, experience events and actually change ourselves?

Rabbi Yehuda cried over Elazar ben Durdaya, because he realized that Elazar was capable of profound greatness. But oh what a shame that he wasted the best years of his life chasing after vanities. Imagine if Elazar had had his awakening years earlier. Imagine how great he would be! That lost potential is what brought Rabbi Yehuda to tears.

If we would only listen, we too could be inspired to grow and make a difference in ourselves and in the world. It happened to Yitro. It happened, at the last opportunity, to Elazar ben Durdaya. If we choose wisely and take action, it can happen to us.

This year on Yom Kippur, when we beat our hearts in remorse for the wrongs committed, it is time for a new degree of "self-centeredness." We must realize that our life is our own responsibility. When we ask for forgiveness, the Almighty already knows what we have done wrong. We are not plowing through our long list in order to inform God. We need to inform ourselves. Because while God can help and encourage, ultimately it is we, through the power of free choice, who can effect the necessary change.

And that's what building eternity is all about.

Rebbitzin Ruthie Simon, a native of Los Angeles, studied at UCLA and received a teacher's degree in Jerusalem. She and her husband, Rabbi Rashi Simon, direct the outreach community and educational programs of Kesher in London.

A Soft Reply Turns Away Anger

Heed the Cry for Respect