It’s Not about the Donuts 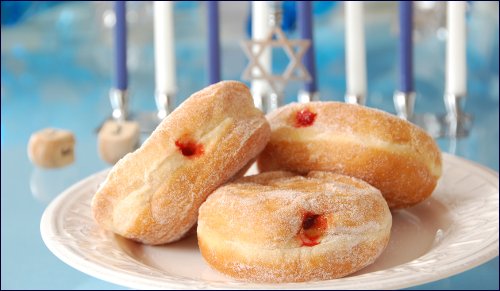 Don’t let the UN vote get you down this Hanukkah.

We kindled our menorah for the first time this year and sang some Hanukkah songs (not quite a rousing rendition!) and then we all looked at each other. Now what?

We gave out a few presents and looked at each other again. The lights were beautiful. They shone in our window to publicize the miracle that the Almighty did for our people, but as we faced inward, we seemed to be at a bit of a loss. I couldn’t think of an activity (Rummikub, Bananagrams or our new favorite, Anomia, just didn’t seem to cut it) but I did decide to adjust my focus.

As I watched the light flicker in the reflection of the window, I thought about all the lights of generations past, all those who came before us – all their challenges and all their victories, all their hope and all their despair. I was uplifted to consider myself a part of that long chain, that progression of Jewish history and that people who continues to rededicate themselves to their people, their traditions and their God, despite their external circumstances – from the destruction of the second Temple through the inquisition, pogroms, the Holocaust and today’s terrorism, we have persevered and we continue to light.

It was a dark day for our generation on the eve of Hanukkah this year as the UN cast another appalling vote and the United States, our erstwhile ally, refused to veto. And yet, the timing couldn’t have been better because the story of Hanukkah reminds us that we are not in charge and that the world will run the way the Almighty wants it to. If a rag-tag band of yeshiva boys can defeat the Greek-Syrian army, surely, in our sophisticated age, we need not despair. We need only recognize the Source of our help.

If we get disconnected from our people, then we are lost, adrift. But, united – across the globe and across the ages, we are eternal.

Last night, after lighting, I was looking for the wrong thing. I was searching for an activity that would highlight the lessons of Hanukkah that would sear its meaning into my heart and soul – and that of my family. But it’s not a sleigh ride or snowmen or ice skating that mark the meaning of the day (especially in southern California where those activities are few and far between!). It’s not even presents (although don’t tell my grandchildren that). It’s the values and ideas. It’s the knowledge that we are part of a chain of Jewish history that stretches back to Creation and forward to the golden era of the Messiah. It’s the fact that we are part of a people that has outlasted its persecutors and clung tenaciously to its values, to a commitment to God.

There’s something peaceful in just sitting and pondering the Hanukkah lights, in not jumping up to go “do” (maybe that’s why women can’t work for a half hour after lighting) and just thinking about the past and the future. Despite the challenging circumstances surrounding the holiday, it is a celebration of hope, of never giving up, of never allowing the power of darkness (and all that it implies) to overtake us. I wanted to do to commemorate the holiday but what I really needed was to just be.

Change will have to happen slowly.

When My Husband Sat Shiva

You Know Your Faults. Do You Know Your Virtues?
Caramelized Onion and Pumpkin Pirozhki
For Every Individual, A Torah Scroll
Allegiance To The Monarch
Comments
MOST POPULAR IN Family
Our privacy policy
Aish.com Is Looking for Great Writers