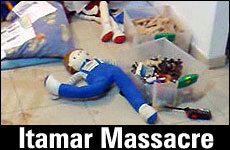 What sort of human being deliberately butchers a sleeping baby?

Last weekend in Itamar, an Israeli settlement in the Samarian hills, terrorists infiltrated the home of Udi and Ruth Fogel and perpetrated a massacre of the innocents.

The killers started with Yoav, the Fogels' 11-year-old, and Elad, his 4-year-old brother. Yoav's throat was slit -- as he was reading in bed, one report said -- and Elad was stabbed twice in the heart. Then the attackers murdered Ruth, knifing her as she came out of the bathroom. In the next room they killed Ruth's sleeping husband, Udi, and their infant daughter, Hadas. Apparently they didn't notice the last bedroom, where the two other boys, Ro'i, 8, and Yishai, 2, were asleep. It wasn't until half past midnight, when 12-year-old Tamar came home from a Friday night youth group, that the horrific slaughter was discovered. Much of the house was drenched in blood, and the 2-year-old was shaking his parents' bodies, crying for them to wake up.

What explains such unspeakable evil? What sort of human being deliberately butchers a sleeping baby, or plunges a knife into a toddler's heart?

As news of the massacre in Itamar spread, young men in Gaza distributed candy and pastries in celebration. The Al-Qassam Brigades, a branch of Hamas, argued that the murder of Israeli settlers was permitted by international law. A day later it changed its tune, insisted that "harming children is not part of Hamas's policy," and suggested instead that the massacre might have been committed by Jews. The Palestinian "foreign minister," Riyad al-Malki, also voiced doubt that the killers could have been Palestinian. "The slaughter of people like this by Palestinians," he claimed, "is unprecedented." Actually, the precedents abound.

The atrocity in Itamar recalls the 2002 terror attack at Kibbutz Metzer that left five victims dead, including a mother and her two little boys. It brings to mind the murder of Tali Hatuel and her four daughters, who were shot at point-blank range as they drove from Gaza to Ashkelon in 2004. It is reminiscent of the bloodbath in a Jerusalem yeshiva three years ago, in which eight young students were gunned down. Unprecedented? If only.

The civilized mind struggles to make sense of such savagery.

There are those who believe passionately that all human beings are inherently good and rational creatures, essentially the same once you get beyond surface disagreements. Such people cannot accept the reality of a culture that extols death over life, that inculcates a vitriolic hatred of Jews, that induces children to idolize terrorists. Since they would never murder a family in its sleep without being driven to it by some overpowering horror, they imagine that nobody would. This is the mindset that sees a massacre of Jews and concludes that Jews must in some way have provoked it. It is the mindset behind the narrative that continually blames Israel for the enmity of its neighbors, and makes it Israel's responsibility to end their violence.

But the truth is simpler, and bleaker. Human goodness is not hard-wired. It takes sustained effort and healthy values to produce good people; in the absence of those values, cruelty and intolerance are far more likely to flourish.

For years the Palestinian Authority has demonized Israelis and Jews as enemies to be destroyed, vermin to be loathed, and infidels to be terrorized with Allah's blessing. Children who grow up under Palestinian rule are inundated on all sides -- in school, in the mosques, on radio and TV, even in summer camps and popular music -- with messages that glorify bloodshed, promote hatred, and lionize "martyrdom."

None of this is news. The toxic incitement that pervades Palestinian culture has been massively documented. What children are taught in the classrooms of Ramallah, Nablus, and Gaza City, Hillary Clinton said in 2007, is "to see martyrdom and armed struggle and the murder of innocent people as ideals to strive for. . . . This propaganda is dangerous." Indeed, it is lethal.

An estimated 20,000 mourners accompanied Udi, Ruth, Yoav, Elad, and Hadas Fogel as they were laid to rest in Jerusalem on Sunday. In his eulogy, Vice Premier Moshe Ya'alon predicted bitterly that in time the Palestinian Authority would honor the Fogel family's murderers and name public squares after them. His comment might have seemed gratuitous -- except that at that very moment, in the West Bank town of Al-Bireh, Dalal Mughrabi was being celebrated at a public square named in her honor. It was Mughrabi who, 33 years earlier, led a PLO terror squad on a savage rampage on Israel's Coastal Road. Thirty-eight innocent Jews were murdered that day, 13 of them children.

(This article originally appeared in The Boston Globe).