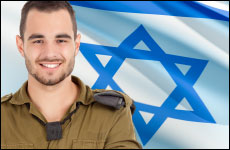 Israel’s sense of historical importance is palpable. The U.S. would do well to emulate it.

Jerusalem – The first question from our group of U.S. war veterans, in typical American fashion, was whether the war-hardened Israeli officer we were meeting with had ever visited the United States for military training or for schooling. He had not; but with a sly grin on his face, he told us that he did visit SeaWorld in California during a family vacation a few years ago. Not exactly what you expect to be talking about with a high-ranking Israel Defense Forces officer.

He told us he was struck by what he experienced at SeaWorld. Before the Shamu whale show, the names of all the Americans killed in action that week in Iraq and Afghanistan were read over the loudspeaker (San Diego is a Marine Corps town, after all), followed by the singing of the national anthem. He was taken aback: “I felt like I was in Israel.” He was heartened to visit a country where patriotism and reverence for freedom’s sacrifices were still demonstrated.

That is in sharp contrast with his feelings about Europe, which he describes as a “giant museum,” slowly fading into irrelevance. This officer had spent a year studying in London, and while he had good things to say about the people he met and plenty of appreciation for the contributions Europe had historically made to the West, he bemoaned the lack of patriotism and the general apathy that pervade Europe, and especially its intelligentsia, today.

Two days into my first trip to Israel, I find this officer’s comments give a helpful insight into what makes Israel such a dynamic and special place. The officer, the men he commands, and the society they defend cannot afford the detachment and distractions experienced by much of the world – especially much of the modern West. This is not to say that Israelis live in fear or under siege; that is certainly not what I’ve observed thus far. But there is an ever-present understanding that the fragile peace they enjoy and their nation itself are preserved only through intentional, purposeful, and courageous action.

There is an ever-present understanding that the fragile peace they enjoy and their nation itself are preserved only through intentional, purposeful, and courageous action.

This is not to say that the country is without divisions. The hawks and the doves see opportunities and threats quite differently. There is also significant tension between the Orthodox Jewish communities and more secular Jews, especially regarding compulsory military service and the importance of (or problem posed by) Israeli settlements, especially in the West Bank. And, most directly, there remains a deep, fundamental distrust between Jewish and Arab Israeli citizens, as a slow-motion demographic race plays out.

Secular Tel Aviv and sacred Jerusalem, the Bible and the Koran, Jew and Arab, war and peace, existence versus extermination – and all with only 8 million people and within 8,000 square miles. The newspapers are full of forbidding headlines, and the streets are always dotted with 18-year-old men and women toting assault rifles. As a representative from the prime minister’s office reminded us, “Every inch of our land someone had to die for” – a statement that George Washington and Abraham Lincoln could relate to.

As an observer, I react to the realities of Israeli life with both envy and relief. Nobody wants to live under the threat of constant attack from enemies right next door, under ceaseless and often unfair international scrutiny, defending his homeland by day and living with the memories of mass genocide at night. You talk to any Israeli today, and he wants peace – to be sure, a just peace. But at the same time, I find myself envious of the gravity and substance of the Israelis’ task. The historic nature of Israel’s struggle for self-determination, freedom, and prosperity underscores the gravity of their circumstances and fortifies my commitment to America’s responsibility as their ally.

The choices Israelis face and the decisions they make, day in and day out, are literally the difference between life and death. In many ways, I liken their reactions to the way I felt while serving in Iraq. Military deployments have never been something to enjoy, but the consequence of the actions, the shared nature of the sacrifices, and the nobility of the cause are invigorating. To be clear, I’m not talking about the killing and the death; rather, the sense of purpose that pervades every action, reaction, and outcome. When you’re deployed – or if you’re living in Israel today – you are living at an important juncture in history. This intensity burns away the pretenses and frivolity that command too much of our attention when life is easy, safe, and predictable.

That is why I appreciate the officer’s comments about what he experienced in America and the contrast he draws between, on the one hand, the U.S. and Israel and, on the other hand, Europe. As Europe continues to abdicate its responsibilities in the world and slowly lose the attributes necessary to face real threats, America is still willing to fight – at the tip of the sword when necessary – for freedom. But, unfortunately, the impression of America that the Israeli officer received during one patriotic moment at SeaWorld is an incomplete one, a small glimpse of a country that is too often distracted from the dangerous world that we still face.

In Israel, you do not have 97 percent of the population living apart from the efforts of the military.

I know I speak for many post-9/11 U.S. veterans in expressing frustration that less than 3 percent of America’s population – military personnel and their families – have been engaged in over a decade of conflict, while the remainder of the population remains largely removed, and in many ways aloof, from the high-stakes efforts of America’s warrior class. Such is the nature of a professional army engaged in a prolonged conflict, and veterans accept that fact in service of American freedom and prosperity. It is our job, plain and simple.

In Israel, you do not have 97 percent of the population living apart from the efforts of the military. It is inspiring to watch a whole culture – from families to politicians to the media to the soldiers themselves – engaged in a shared and just struggle for freedom and representative government. The enemy they face is radical Islamism, a threat America also knows very well. In facing this threat, we can learn a great deal from our Israeli allies about shared sacrifice, clarity of purpose, and steely-eyed resolve.

Israel is living history – on the front lines for freedom – and Americans would do well to remember that we are, too.

This report originally appeared in nationalreview.com

Pete Hegseth is the CEO of Concerned Veterans for America and an Army veteran of Afghanistan, Iraq, and Guantanamo Bay.

You Are What You Think1 min read

Wanted by the FBI9 min read