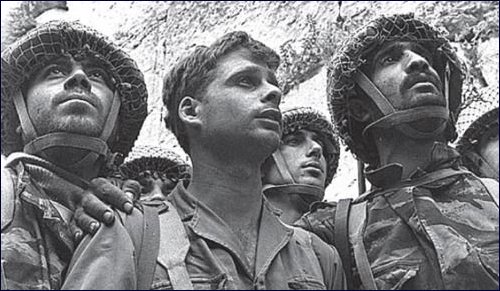 A snapshot of the work of David Rubinger, the renowned Israeli photographer who has died at the age of 92.

Born in Vienna, Rubinger’s life mirrored that of the Jewish state he helped found and whose history he so memorably documented.

Saved from the Holocaust when he secured a place in 1939 on a Zionist youth group ship to Palestine, he later fought in World War II as part of the celebrated “Jewish Brigade” in the British army, seeing action in Malta and Italy. He later fought in Israel’s War of Independence and then settled into life as a news photographer, working for Israeli newspapers and internationally for Time-Life.

In 2004, Rubinger briefly found himself the subject of international news. After his wife of 54 years, Anni, died in 2000, Rubinger started dating a 78 year old Jerusalem widow named Ziona Spivak. In 2004, she was brutally murdered in her home by a Palestinian man she’d once employed and to whom she’d given charity often in the past. Writing about his love in the Israeli newspaper Yedioth Ahronoth at the time, Rubinger poignantly explained “that even late in life love can burn as fiercely as it does in youngsters.”

David Rubinger’s photographs convey the beauty and passion of Israel over the past six decades. Here are a few of the notable images he captured in the life of the homeland he did so much to help build.

On November 29, 1947, the nations of the world voted to partition Palestine into a Jewish and Arab state. Arab leaders rejected the vote and promised to declare war on a Jewish state, vowing to drive the nascent Jewish country into the sea. The Jewish community rapturously celebrated the vote.

Rubinger recalled the scene in Jerusalem: “For anyone privileged to have been living there at the time, this surely was one of the most momentous happenings that one could have imagined. We, along with all our neighbors, were glued to the radio. At midnight, a majority vote was cast for the establishment of a Jewish state in Palestine. The city erupted with milling crowds thronging the streets, singing, dancing, and celebrating.”

The modern state of Israel came into being on Friday, May 14, 1948. Hours later, the armies of Jordan, Egypt, Syria and Lebanon invaded the new Jewish state. Vastly outgunned and outmanned, Israel scrambled to raise a fighting force to repel the invaders.

Searching for Dentures in No-Man’s Land

Following Israel’s War of Independence, Jordanian forces occupied the eastern half of Jerusalem, including the famed Old City containing the Western Wall and other holy sites. No Jews were allowed to live or visit the eastern half of the city, and Jewish homes near the border were frequently the targets of sniper fire from Jordan.

In this tense atmosphere, a patient in a Catholic hospital located along the border leaned out of an open window and accidently dropped her dentures. Retrieving them required a major international mission. UN officials declared retrieving the dentures a priority and sent in an Israeli officer, a French officer waving a huge white flag to deter Jordanian snipers, and several nuns from the hospital. After searching through the rubble of no-man’s land, one nun, Sister Augustine, glimpsed something on the ground, bent down, and triumphantly held up the missing dentures.

Rubinger’s photo appeared in Life magazine, where it provided a ray of light in the otherwise unrelenting gloom of Jordanian violence and occupation.

In the midst of the Six Day War, David Rubinger covered the fighting in Jerusalem. Making his way on foot to the front lines in the Old City of Jerusalem, he arrived at the Western Wall a few minutes after Israeli troops took control of Judaism’s holiest site. Rubinger remembered: “To get the most effective shot...it was necessary for me to lie down on the ground and shoot skywards so that I could capture in my lens both the victorious Israeli paratroopers and as much of the Wall as possible.”

When Israeli troops reached the Kotel, Israeli army’s Chief Rabbi Shlomo Goren blew a shofar, marking the first time in 1,997 years that the Wall, the remnant of the ancient Temple in Jerusalem, was once again Jewish control.

David Rubinger recalled the intense emotions at the time: “The scene around me was extremely emotional…. People were crying with joy and relief, and I have to admit that, as I shot my pictures, tears were rolling down my cheeks too.”

David Rubinger followed the artist Marc Chagall around the Knesset, Israel’s parliament, as he sketched pictures that would eventually become the magnificent tapestries that adorn its walls and mosaics that decorate the floors. On the day of the tapestries’ unveiling, Rubinger had his camera trained on the artwork when he suddenly realized that he’d be able to photograph the tapestries any time. This was his only opportunity, however, to capture the reaction of the artist and Prime Minister Golda Meir.

“So instead,” Rubinger recalled, “I turned around and took a close-up picture of Chagall at the crucial moment when he leaned over and took hold of Golda’s elbow just as the covers were removed from his tapestries. I overheard him say to her in Yiddish, ‘Nu se gefaelte dir, Goldie?’ (Well, do you like it, Golda?) I saw her gasp as the work was uncovered, and I think she was overwhelmed. He smiled at her with evident satisfaction.”

In 1976, an Air France flight carrying 244 passengers from Athens to Paris was hijacked by the Popular Front for the Liberation of Palestine, with help from the German Baader-Meinhof Gang. The plane was forced to land in Libya for refueling, then flew to Entebbe in Uganda. There, hijackers separated the Jewish and/or Israeli passengers, released the non-Jewish passengers, and then demanded the release of scores of convicted Palestinian terrorists from prisons around the world in return for the Jewish prisoners. Israel refused to negotiate with the terrorists and launched an audacious rescue mission instead. One hundred out of the 103 Jewish hostages were rescued; one Israeli officer, Yoni Netanyahu (brother to current Israeli Prime Minister Benjamin Netanyahu) was killed.

David Rubinger captured the moment when the returning heroes landed in Israel: “I was at the airport to welcome back our brave and courageous boys and photographed the pilot who led the four Hercules rescue planes as he was held aloft on the shoulders of the jubilant crowd.” Years later, Rubinger met the pilot he’d photographed, who was not pleased, telling Rubinger ,“After I was seen publicly in your photograph in Time, our security services forced me to wear a wig for a year to avoid my being recognized and possibly attacked!”

In the 1950s, Life magazine commissioned Rubinger to spend a few days with Golda Meir, then Foreign Minister of Israel. A capable and formidable leader, Golda Meir also had a tender side, which Rubinger captured in his photos. He later recalled: “I watched her in a true domestic role, putting out nameplates for a diplomatic dinner at her home, going shopping, buying sweets and clothes for her grandchildren, and cooking in the kitchen for the family. This kitchen became known as ‘Gold’s Kitchen,’ a place where, when she was foreign minister and later prime minister, many far-reaching political and military decisions were made….”

Operation Solomon was the airlift of over 14,000 Ethiopian Jews from Addis Ababa in a massive 36-hour operation, on May 24 and 25, 1991. David Rubinger photographed the planes as they landed and recalled the incredibly scene. “Many of the Ethiopian community in Israel who had arrived on the earlier aliyah were at the airport to welcome their relatives, so you can imagine how moving the scenes of families being reunited. It was a very emotional time. I covered one such story of a young man who had arrived in Israel as a child but was now a sergeant in the Israeli Defense Forces, happily settled and waiting for his relatives to join him.”

(All quotes are from Israel Through My Lens: Sixty Years as a Photojournalist by David Rubinger with Ruth Corman, Abbeville Press Publishers, London: 2007.)

The Nice German
The Softball Player
How This 6 Generation Bread Baker Brought Back Israel’s Ancient Grains
Olivia Newton John’s Grandfather was a Nobel-Prize Winning Jewish Physicist
Comments
MOST POPULAR IN Israel
Our privacy policy
Aish.com Is Looking for Great Writers