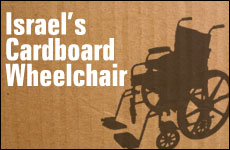 It’s rolling out from Israel and ready to conquer the world.

Israeli entrepreneur Nimrod Elmish is positive that the idea for a wheelchair made out of cardboard has crossed many people’s minds. But it took an Israeli team to make it a reality.

“Welcome to the startup nation,” says Elmish, an expert in leading early-stage startups to maturity. “We have seen you can build agriculture in the middle of the desert. We recognize a major problem in the world and we find the best solutions. We can always find a solution – you just need persistence and patience.”

With great feedback and global interest in their first venture – recyclable cardboard bicycles – (see video below) Elmish and automation expert Izhar Gafni of I.G. Cardboard Technologies have quietly added the cardboard wheelchair project to their operation. It’s made of less than $10 worth of durable recycled cardboard, plastic bottles and recycled tires.

We believe that nothing is impossible and anything is possible.

“Anything that you make out of wood, plastic or metal can be made out of our material,” Elmish tells ISRAEL21c. “Cardboard bikes, wagons, wheelchairs, chairs for airplanes or trains, toys, even cars. We’re not building cars yet. But I say, ‘yet.’ We believe that nothing is impossible and anything is possible.”

An international non-profit organization dedicated to providing free wheelchairs for the disabled in developing nations heard about the cardboard bicycles and got in touch with ERB, the parent company of I.G. Cardboard Technologies.

Since 2001, the organization – which requested anonymity – has bought 120,000 metal wheelchairs from Chinese manufacturers every year to ship to Africa, at an annual cost of more than $6 million.

“It will cost him a one-time fee of $6 million to build a factory for the production of cardboard wheelchairs in Africa and then almost nothing to produce them,” says Elmish, CEO of I.G. Cardboard Technologies.

“He can produce as many wheelchairs as he wants once the factory is running. All we need is access to old car tires, plastic bottle recycling and cardboard recycling.”

The maintenance-free cardboard wheelchair, weighing eight or nine kilograms (less than 20 pounds), can withstand water and humidity, and can carry riders weighing up to 400 pounds. It is even cheaper and simpler to create than the cardboard bicycle.

Elmish says the chairs would be made on largely automated production lines supplemented by a workforce comprising people with disabilities.

“There are no financial benefits to making the wheelchairs in cheap labor markets. We choose the country [where the factory will be set up] with incentives in mind,” he explains. “Our factories will always be local in order to receive government grants for the manufacturers.”

Rebates for using “green” materials would cancel out production costs. The wheelchairs and bicycles could thus be given away for free in poor countries.

“Our partners and manufacturers [will] receive almost all of the production costs of our products back from governmental and global incentives, making our products available to almost any person in any philanthropic or commercial business model,” according to the company’s mission statement.

Making a cardboard bike or wheelchair looks like an exercise in origami with enormous blocks of cardboard.

Governments, politicians, manufacturers, consumers and non-profit organizations have all shown great interest in the cardboard vehicles.

“The feedback is amazing,” says Elmish. “A year and a half ago, the most common reaction we got was that no one would even think of buying our product and that the markets would reject it. Now that’s the least of our problems. Everyone wants a part of this.”

The hype has been so great that Elmish had to hire two people just to sort through his 300 to 500 daily emails from fans and potential sponsors.

“One year from today our four products will be on the market — youth bikes, children’s balance bikes, wheelchairs and electric bikes,” he predicts.

Several European railroad operators have expressed interest in placing the bikes outside stations as a way of enticing people to continue by bike to their destination. “The whole idea is to take the cars out of the city,” says Elmish.

While naysayers still abound, Elmish says the prototypes have proven their mettle.

“There are a lot of smart guys who still say it cannot be done,” he says. “So we’re building a small factory in Israel to show how it’s done.”

This article originally appeared on israel21c.org.

A Tale of Two Heroes

Thank You, Hero
What Makes Eli Run?
The Tyranny of Materialism
Science Enters the Mysterious Inner World of Consciousness
Comments
MOST POPULAR IN Israel
Our privacy policy