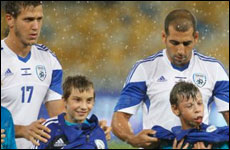 After centuries of anti-Semitism, Israel’s national soccer team shows the locals what it means to be a mensch.

Israel’s national soccer team made a name for themselves last week in Ukraine but not due to their soccer-playing skills. Rather they caused a stir by their reaction to rain falling upon some Ukrainian children.

As the national anthems of Israel and Ukraine played before a sociable soccer game in Kiev, the Israelis shielded a group of children lined up before them from a chilly rainfall. Photos revealed that the Ukrainian team appeared indifferent to the children's plight.

As is the custom in international matches, the children joined the players for the singing of the anthems when suddenly torrential rain began to fall. The Israeli players removed their training jackets and covered the children when one of them noticed that a child was obviously shivering.

"We made the gesture and I hope that all the children returned home safely,” stated Israeli soccer star Itay Shechter regarding the incident.

“When it began to rain during the anthems, we decided to take off our training jackets because we saw that the kids that were with us were freezing in the cold strong rain. We immediately decided to place the training jackets on the children so that they would feel a little more cozy and warmer,” another player Eitan Tibi added. 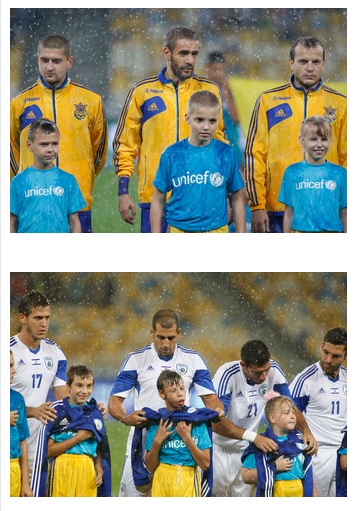 The incident caused media attention in Ukraine and in Russia, criticizing the Ukrainian team. "The human reflex was to do what the Israeli players did,” one newspaper admirably commented.

Although Jews have lived in Ukraine for centuries, its history is full of anti-Semitic incidents, bloody pogroms, and deep-seated hatred.

In fact, Jews have lived in this land since the eighth century, evidenced by a letter written in Hebrew by the Jews of Khazaria, a kingdom on the Black Sea. There were Jews living in the town of Lvov from the fourteenth century. Throughout the succeeding centuries, despite pogroms, persecution and poverty, Ukraine’s Jewish population grew steadily, eventually totaling about 3 million people or 8 percent of the population.

Desperately poor and devout, these Jews clung to the faith of their ancestors, a real-life Fiddler on the Roof. Ukraine was the land of great rabbis, hassidim, arranged marriages and Sabbaths of respite filled with prayer and song.

Between 1648 and 1656, tens of thousands of Jews were brutally murdered in the Chmielnicki Uprising, considered one of the most harrowing events in Jewish history.

The Ukrainian city of Odessa was the site of the first modern pogroms. In 1871, on the night before Easter, drunken sailors started throwing stones at Jewish homes and shops. The looting went on for three days before the police were able to restore order.

Throughout that decade, the Czarist government increasingly used anti-Semitism to balance growing revolutionary rebellion. When Czar Aleksander II was assassinated by anarchists in 1881, riots swept through southern Ukraine. In Kiev, a mob looted a Jewish-owned warehouse, rampaging through the poor Jewish suburbs while most of the townspeople looked the other way. ‘It was a calm and sunny Sunday holiday,’ wrote an onlooker. ‘I don’t know what astonished me more, the boldness of the plunderers or the shocking indifference of the public.’

When the Nazis invaded Ukraine in June, 1941, atrocities against the Jews started within a few days. At the time Odessa had 180,000 Jews, Kiev 175,000 and Lvov 100,000. In the quiet little villages of Galicia, Jews consisted of 40 or more percent of the population.

There is evidence that the Ukrainian auxiliary police participated in the round-up of Jews for the horrific Babi Yar massacre and in other Ukrainian cities and towns. In September, 1941, the Nazi-controlled Ukrainian newspaper Volhyn wrote, "The element that settled our cities (Jews)... must disappear completely from our cities. The Jewish problem is already in the process of being solved."

Most of its 2.25 million Jews were rounded up, shot and buried in the forests and ravines near their own towns. Others were sent to the gas chambers at Belzec or to the slave-labor camp in Lvov. Over 60 per cent of the Jews of Soviet Ukraine and 90 per cent of the Jews of Galicia were murdered in the Holocaust. The participation of Ukrainian collaborators in these now documented events is a matter of difficult public debate in Ukraine.

Though the Israeli team was defeated in the subsequent match against Ukraine by two goals to none, in a humanitarian sense they were undoubtedly the winners.

I Am a Jew: Bari Weiss's Powerful Speech

The First Quarantine in Egypt

I've Inherited My Father's Nightmares
Blessing on Chewing Gum
Was Rahab a Prostitute?
Extras In Our Own Epic
Comments
MOST POPULAR IN Israel
Our privacy policy