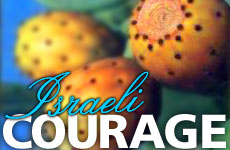 What is it that allows so many Israelis to display courage and resilience in the face of tremendous challenge and difficulty?

"Welcome Brave Tourists: Special Discount For You," the signs in Ben Yehudah beseech passersby. Written in a homemade scrawl, signs similar to this are posted in many of the windows of Jerusalem's souvenir, silver, Judaica and craft shops.

Yet who are the truly brave ones? While Israelis have been experiencing overwhelming stress in their daily lives due to the current conflict, they collectively remain strong and resourceful. What is it that allows so many Israelis to display courage and resilience in the face of tremendous challenge and difficulty? What are the lessons that we in the Diaspora can learn from them in this post-9/11 era?

There are certain qualities that many Israelis share that I believe helps them cope with even the most traumatic of circumstances.

Israelis Live For The Present

Israelis do not spend great amounts of time ruminating over issues or events that have occurred years, months or even weeks ago. Israelis live each day anew, understanding in the face of overwhelming daily challenges that each day is a blessing and life must be lived one day at a time.

Israelis Anticipate Challenges as a Normal Course of Events

Israelis do not expect a smooth ride in life. They won their independence and right to exist against great odds, and over the years have never had an extended period of relaxation and complacency where they did not have to be concerned about fighting anew for their survival.

The Talmud states that the Almighty gave the people of Israel three precious gifts, but none were given without suffering. They are Torah, the Land of Israel and the World to Come (Brachot 5). Anticipating challenges and sacrifice as a normal, expected occurrence toward achieving a desired outcome helps to alleviate frustration and successfully manage these challenges.

Israelis live the axiom, "No Pain, No Gain." What is meaningful in life is only achieved with great effort, and the results are valuable not in spite of the struggle but precisely because of it.

Spend five minutes with an Israeli cabdriver, shopkeeper or yeshiva student, and you will probably know exactly what they are thinking. Israelis lack pretensions and will often readily share their opinions and feelings about current issues. They say what they mean and mean what they say. Israelis are not shy about expressing themselves and often do so with an honesty that is poignant, refreshing and adaptive.

Israelis Have A Cause

Most Israelis know what they are fighting for. For some it is a religious and spiritual understanding of the importance of the land of Israel to the very existence and soul of the Jewish people. For others it is a fierce determination to ensure that the Holocaust never be repeated by having a safe refuge for every Jew to call home.

Israeli soldiers have the lowest incidence of Post-Traumatic Stress Disorder compared to other nations' military officers. Many have attributed this to an unwritten rule among Israeli soldiers: staying in touch with and taking care of the families of their fallen comrades for life. Having this purpose to live for helps the surviving soldiers find meaning and cope with their traumatic experiences.

Israelis Have Hope For The Future

Despite the many challenges they are facing, most Israelis have maintained the ability to say "Yihiyeh Tov" -- It will be good.

Despair is a greater enemy to the Jewish people than any external force could ever be. It is important to remember that God Himself declared in an eternal message to the Jewish people, "There is hope for your future" Jeremiah 31:16. It is hope that keeps the Jewish people trusting in God, looking toward the future and believing in the promise of redemption and a better tomorrow.

May the optimism, perseverance and courage of the people of Israel be a model to all Jews in these troubling times and help us merit the redemption speedily in our days.

Jerusalem's Supermen
Should I Break Up, Get Engaged or Keep Dating?
Time Is Your Precious Commodity
A Constant World in Flux
Comments
MOST POPULAR IN Israel
Our privacy policy