Israel, Sudan and Me 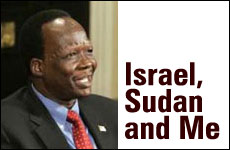 A former Sudanese slave speaks out. 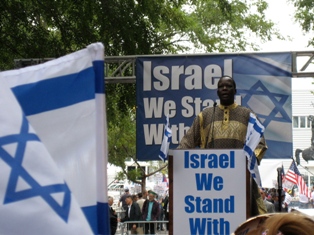 Simon Deng, a former South Sudanese slave taken by a neighbor as a young boy to Islamist Northern Sudan, gave this impassioned speech at the Durban Watch Conference in New York, Sept 22, 2011.

I want to thank the organizers of this conference, The Perils of Global Intolerance. It is a great honor for me and it is a privilege really to be among today's distinguished speakers.

I came here as a friend of the State of Israel and the Jewish people. I came to protest this Durban conference which is based on a set of lies. It is organized by nations who are themselves are guilty of the worst kinds of oppression.

It will not help the victims of racism. It will only isolate and target the Jewish state. It is a tool of the enemies of Israel. The UN has itself become a tool against Israel. For over 50 years, 82 percent of the UN General Assembly emergency meetings have been about condemning one state – Israel. Hitler couldn't have been made happier.

The Durban Conference is an outrage. All decent people will know that.

But friends, I come here today with a radical idea. I come to tell you that there are peoples who suffer from the UN's anti-Israelism even more than the Israelis. I belong to one of those people.

Please hear me out.

By exaggerating Palestinian suffering, and by blaming the Jews for it, the UN has muffled the cries of those who suffer on a far larger scale.

For over 50 years the indigenous black population of Sudan — Christians and Muslims alike — has been the victims of the brutal, racist Arab Muslim regimes in Khartoum.

The UN is focused about Palestinians, while ignoring ethnic cleansing in Sudan.

In South Sudan, my homeland, about 4 million innocent men, women and children were slaughtered from 1955 to 2005. Seven million were ethnically cleansed and they became the largest refugee group since World War II.

The UN is concerned about the so-called Palestinian refugees. They dedicated a separate agency for them, and they are treated with a special privilege.

Meanwhile, my people, ethnically cleansed, murdered and enslaved, are relatively ignored. The UN refuses to tell the world the truth about the real causes of Sudan's conflicts. Who knows really what is happening in Darfur? It is not a "tribal conflict."

It is a conflict rooted in Arab colonialism well known in north Africa. In Darfur, a region in the Western Sudan, everybody is Muslim. Everybody is Muslim because the Arabs invaded the North of Africa and converted the indigenous people to Islam. In the eyes of the Islamists in Khartoum, the Darfuris are not Muslim enough. And the Darfuris do not want to be Arabized. They love their own African languages and dress and customs. The Arab response is genocide! But nobody at the UN tells the truth about Darfur.

In the Nuba Mountains, another region of Sudan, genocide is taking place as I speak. The Islamist regime in Khartoum is targeting the black Africans – Muslims and Christians. Nobody at the UN has told the truth about the Nuba Mountains.

Do you hear the UN condemn Arab racism against blacks?

What you find on the pages of the New York Times, or in the record of the UN condemnations is "Israeli crimes" and Palestinian suffering. My people have been driven off the front pages because of the exaggerations about Palestinian suffering. What Israel does is portrayed as a Western sin. But the truth is that the real sin happens when the West abandons us: the victims of Arab/Islamic apartheid.

Chattel slavery was practiced for centuries in Sudan. It was revived as a tool of war in the early 90s. Khartoum declared jihad against my people and this legitimized taking slaves as war booty. Arab militias were sent to destroy Southern villages and were encouraged to take African women and children as slaves. We believe that up to 200,000 were kidnapped, brought to the North and sold into slavery.

I am a living proof of this crime against humanity.

I don't like talking about my experience as a slave, but I do it because it is important for the world to know that slavery exists even today.

I was only nine years old when an Arab neighbor named Abdullahi tricked me into following him to a boat. The boat wound up in Northern Sudan where he gave me as a gift to his family. For three and a half years I was their slave going through something that no child should ever go through: brutal beatings and humiliations; working around the clock; sleeping on the ground with animals; eating the family's left-overs. During those three years I was unable to say the word "no." All I could say was "yes," "yes," "yes."

The United Nations knew about the enslavement of South Sudanese by the Arabs. Their own staff reported it. It took UNICEF – under pressure from the Jewish-led American Anti-Slavery Group — 16 years to acknowledge what was happening. I want to publicly thank my friend Dr. Charles Jacobs for leading the anti-slavery fight.

But the Sudanese government and the Arab League pressured UNICEF, and UNICEF backtracked, and started to criticize those who worked to liberate Sudanese slaves. In 1998, Dr. Gaspar Biro, the courageous UN Special Rapporteur on Human Rights in Sudan who reported on slavery, resigned in protest of the UN's actions.

Today, tens of thousands of black Sudanese are enslaved and the UN is silent.

My friends, today, tens of thousands of black South Sudanese still serve their masters in the North and the UN is silent about that. It would offend the OIC and the Arab League.

As a former slave and a victim of the worst sort of racism, allow me to explain why I think calling Israel a racist state is absolutely absurd and immoral.

I have been to Israel five times visiting the Sudanese refugees. Let me tell you how they ended up there. These are Sudanese who fled Arab racism, hoping to find shelter in Egypt. They were wrong. When Egyptian security forces slaughtered 26 black refugees in Cairo who were protesting Egyptian racism, the Sudanese realized that the Arab racism is the same in Khartoum or Cairo. They needed shelter and they found it in Israel. Dodging the bullets of the Egyptian border patrols and walking for very long distances, the refugees' only hope was to reach Israel's side of the fence, where they knew they would be safe.

Black Muslims from Darfur chose Israel above all the other Arab-Muslim states of the area. Do you know what this means!? And the Arabs say Israel is racist!?

In Israel, black Sudanese, Christian and Muslim were welcomed and treated like human beings. Just go and ask them, like I have done. They told me that compared to the situation in Egypt, Israel is "heaven."

Is Israel a racist state? To my people, the people who know racism – the answer is absolutely not. Israel is a state of people who are the colors of the rainbow. Jews themselves come in all colors, even black. I met with Ethiopian Jews in Israel. Beautiful black Jews.

So, yes… I came here today to tell you that the people who suffer most from the UN anti-Israel policy are not the Israelis but all those people who the UN ignores in order to tell its big lie against Israel: we, the victims of Arab/Muslim abuse: women, ethnic minorities, religious minorities, homosexuals, in the Arab/Muslim world. These are the biggest victims of UN Israel hatred.

Israel is a state of people who are the colors of the rainbow.

Look at the situation of the Copts in Egypt, the Christians in Iraq, and Nigeria, and Iran, the Hindus and Bahais who suffer from Islamic oppression. The Sikhs. We – a rainbow coalition of victims and targets of Jihadis — all suffer. We are ignored, we are abandoned. So that the big lie against the Jews can go forward.

On January 9 of 2011 South Sudan became an independent state. For South Sudanese, that means continuation of oppression, brutalization, demonization, Islamization, Arabization and enslavement.

In a similar manner, the Arabs continue denying Jews their right for sovereignty in their homeland and the Durban III conference continues denying Israel's legitimacy.

As a friend of Israel, I bring you the news that my President, the President of the Republic of South Sudan, Salva Kiir — publicly stated that the South Sudan embassy in Israel will be built— not in Tel Aviv, but in Jerusalem, the eternal capital of the Jewish people.

I also want to assure you that my own new nation, and all of its peoples, will oppose racist forums like the Durban III. We will oppose it by simply telling the truth. Our truth.

My Jewish friends taught me something I now want to say with you.
AM YISRAEL CHAI - The people of Israel lives!

This article originally at www.newenglishreview.org

Simon Deng, a native of the Shiluk Kingdom in southern Sudan, is an escaped jihad slave and a leading human rights activist.

The Murder of Zidan Saif