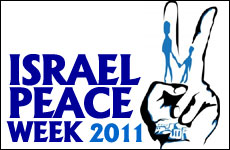 As anti-Israel propaganda increases on university campuses, pro-Israel student leaders are communicating the truth about Israel.

Pro-Israel students across the US and Canada have launched a powerful and innovative campaign to communicate important messages about Israel’s efforts for peace. The initiative also focuses on existential threats to the Jewish state, and the values and accomplishments of a thriving democracy in an otherwise despotic region. Known as ‘Israel Peace Week’ (IPW), the campaign is being hosted at nearly 50 universities across North America. 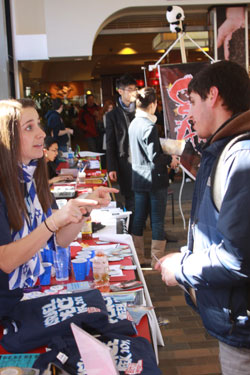 IPW also seeks to counter a disturbing trend called ‘Israel Apartheid Week’ (IAW). During each spring since 2005, the dishonest and vitriolic IAW campaign sweeps across university campuses and urban communities. Last year events were conducted throughout North America and across the world, with organizers in more than 40 cities.

The conventional wisdom has been that the pro-Israel movement should stay focused on proactive efforts to highlight Israel’s accomplishments, avoid discussion of the Arab-Israeli conflict, and to not draw any attention to IAW.

There is merit to this argument. After all, if the goal of IAW is for universities to actually boycott, divest and sanction Israel (also known as BDS), the movement has had very little tangible success on North America’s campuses. The secondary goal of IAW, however, is to delegitimize the state of Israel, and on that front, there is room for concern.

Most supporters of Israel recognize that criticism of particular Israeli policies is legitimate, and not inherently anti-Semitic. However, when criticism of Israel consists entirely of Natan Sharansky’s ‘Three D’s’ it becomes problematic.

The Three D's are: demonization, double standard, and delegitimization.

first ‘D’ is demonization, misrepresenting Israel through lies, hyperbole, and graphic imagery. Examples include comparing Israelis to Nazis (and thereby equating the mass extermination of millions with Israel’s treatment of the Palestinians), or Israel and apartheid South Africa (comparing a colonial, discriminatory regime with a thriving Israeli democracy where minorities enjoy equal rights).

The second ‘D’ is holding Israel to a double standard. The prime example is Israel being singled out by the United Nations while countries like China, Iran and Syria are ignored. A classic example of this occurred last week when, as hundreds of protestors were brutally killed by the Libyan regime, the United Nations was focused on a vote to condemn the building of Jewish homes in disputed territory.

Finally, there is delegitimizing Israel, denying Israel’s fundamental right to exist, such as re-writing history to deny any Jewish historical connection to the Land of Israel.

All three of the ‘D’s’ are standard components of the IAW campaign.

One particularly important point is that the BDS movement - whose leaders have consistently rejected the two-state solution—is out of sync with the national aspirations of the Palestinian people as well. Furthermore, IAW’s relentless focus on Israel leaves no room to discuss the real issues in Palestinian society, such as political corruption, violent incitement, and the rise of fundamentalist Islam. These issues affect the Palestinian people much more regularly than Israeli actions.

And as IAW has spread to campuses across the US in cities like New York, Chicago, Boston, Houston, Miami, San Francisco and many others, pro-Israel students have expressed concern that ‘strategically ignoring’ IAW has allowed public opinion on campus become increasingly anti-Israel.

Last year, a group of pro-Israel student leaders developed a clever way to counter the anti-Israel claims raised during IAW while communicating a proactive and positive message about Israel. ‘Israel Peace Week’ was conceived of by a group of five student leaders, each one from a different campus, during their participation on the Hasbara Fellowships activism training program in Israel.

The concept of ‘Israel Peace Week’ is simple: focus on a few basic messages, agreed upon by virtually everyone in the pro-Israel movement, and communicate them widely to the campus community during the week preceding ‘Israel Apartheid Week.’ Instead of avoiding difficult topics, the pro-Israel students feel that truth is on their side and they can tackle the Arab-Israel conflict head-on.

In little over a month, pro-Israel students from more than 20 other universities organized ‘Israel Peace Week’ programming to their campuses in spring of 2010, and this year the number will reach nearly 50.

The movement is primarily student-led, with organizers using a detailed primer that includes messaging, strategies, sample schedules and ideas. Hasbara Fellowships is providing print materials and campaigns, as well as on-the-ground professional support. Other organizations are also lending resources and funds.

As our stomachs churn with the oncoming approach of an annual week of Israel demonizing, it is inspiring that pro-Israel students are standing up for Israel and speaking the truth.

Find out more about ‘Israel Peace Week’ or contact Hasbara Fellowships to join the IPW effort.

Ordained by the Holocaust
It Takes A Lot Of Faith To Be An Atheist
How Instagram Brought Back This Nostalgic Soup
What Makes Eli Run?
Comments
MOST POPULAR IN Israel
Our privacy policy