Israel Is Not Enough 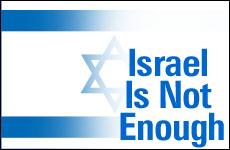 In reading the Jerusalem Post editorial “Jewish Continuity? Visit Israel”, I was struck by the focus, especially the closing sentence: “To experience the tremendous achievements, and to be awed by the challenges of sovereignty in this historic sliver of land – adds up to a powerful incentive to care about staying Jewish.”

I think we are distracted sometimes by numbers, and this is true for the numbers participating in Israel programs. Quantity is important and, in the example of Birthright, impressive. However, numbers alone will not create the impact on future generations (stronger connections to the Jewish community, personal Jewish growth) for which we are striving.

To quote Moses Montefiore: “The danger of counting Jews is that if they believed, even for a moment, that there is strength in numbers, the Jewish people would long ago have given way to despair. To win the Jewish battle – the battle of the spirit, the victory of heart, mind and soul – you do not need numbers. You need dedication, commitment, study, prayer, vision, courage, ideals, hope.”

The last sentence of the editorial really gets to the heart of our current dilemma: How do we strengthen Jewish identity, thereby ensuring Jewish continuity? It is an assertion focused wholly on the effect of a visit to Israel and, how it stimulates “care about staying Jewish.”

Jewish content must imbue the experience from the start.

There is no doubt that a visit is a powerful experience and influences change in how some see themselves as Jews. But an overemphasis on the achievements and challenges of the state is missing something existential to the meaning of being Jewish. In other words, visiting Israel is not enough to ensure Jewish continuity.

Natan Sharansky, in responding to the claim that an Israeli identity is synonymous with a Jewish one, responded: “This definition of identity grants a bill of divorce to the Jewish people, to the Jewish heritage, to 3,000 years of culture, creativity, prayer, rituals, tradition and everything that is subsumed in the term ‘Judaism.’”

We should be asking ourselves, what is it that makes an Israel experience a Jewish experience, and what is necessary to solidify Jewish identity in a sustainable way?

I would posit that Jewish content must imbue the experience from the start, and flow into follow-up experiences in North America and here.

In a strategic move, the Jewish Agency has declared a shift from its emphasis on aliya to that of strengthening Jewish identity. At a Partnership 2000 conference last summer, Alan Hoffmann, the agency’s director, declared a direct tie between Jewish identity and Jewish content.

Taglit-Birthright Israel has touched on this, and had tremendous success in making an Israel trip a life-cycle event for Diaspora Jews, 18-26. Many Israelis who have participated in the “meeting” component of the trip have been challenged to reexplore what being Israeli – and Jewish – means.

Although praising birthright, Gary Rosenblatt pointed out in the Jewish Week following Len Saxe’s study last year that “the birthright trip appeared to have little influence on the participants’ ‘religious observance, communal involvement and on their feelings of connection to Jewish customs and traditions and to their local Jewish community, which were about the same as nonparticipants.’”

A recent report sponsored by the Avi Chai Foundation, which looked at new Jewish leadership in their 20s and 30s within and outside the establishment reveals an important trend: Those younger, non-establishment leaders (representing a growing number of Jews), when asked about issues relating to continuity, responded as follows: 33 percent were “very worried/bothered” that young Jews were not interested in Jewish life, 17% were “very worried/ bothered” by high intermarriage and 15% were “very worried/ bothered” by Jews distancing themselves from Israel. The relative importance of Israel and the impact of intermarriage in the discussion of Jewish continuity is changing.

If visiting Israel is not enough, then what is? To answer, we need to look again at Jewish content. I asked some Jews – Israeli and North American – gathered at that same Partnership 2000 conference in Jerusalem, to answer the question: “What would you include in Jewish content?”

Without regard to religious orientation (most of those asked considered themselves secular) or place of residence, they had very similar ideas: Jewish ethics and values, Shabbat experience, experiencing Jewish traditions together, Jewish holidays, learning with Jewish texts (Torah, Talmud), history and archeology, tikkun olam projects, a spiritual connection to the Land of Israel, connecting with the Jewish calendar, sharing a common historical and religious destiny, the Hebrew language and ethics that bind us.

It is time we address the question: What are those components and content of an Israel experience that leads one to want to be part of a Jewish community and build his or her Jewish identity? Until we explore this issue in depth, the goal will remain focused on numbers. We are missing an opportunity – maybe our last – to really provide the “transformative experience” needed to plant seeds that encourage further Jewish growth and discovery.

I Am a Forgotten Jew

Life and Death in Istanbul

The Life of Rabbi Chaim Kanievsky zt”l
Don’t Believe in Other Gods Versus God is One
Seeing Without Eyes
Why Shouldn’t We Eat Whatever We Want?
Comments
MOST POPULAR IN Israel
Our privacy policy
Aish.com Is Looking for Great Writers